Seminal pop art figure Tom Wesselmann finally gets his due at the VMFA. 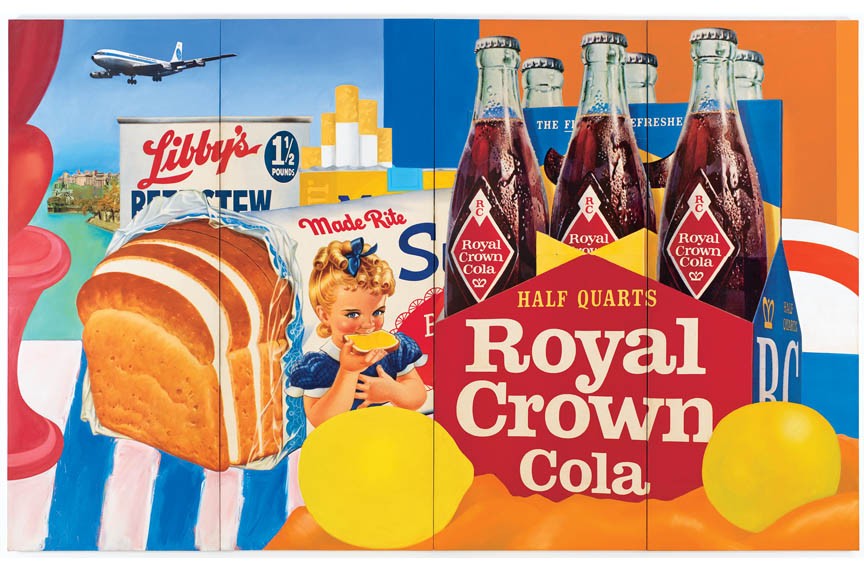 Quick: Can you name three major American pop artists? Inevitably the first who comes to mind is Andy Warhol, with his soup cans and repeating portraits. Next might be Roy Lichtenstein, the creator of comiclike images, often with speech bubbles. Then there's. ... Well, that's usually where the household names stop.

But worthy of the list is Tom Wesselmann, an artist whose complexity and originality puts him at the forefront of the postwar art movement that came to define modern art. While he may not be a household name, he's finally getting a show that befits his career.

Starting Saturday, the Virginia Museum of Fine Arts will serve as host to the only full-career retrospective of his work on the East Coast, "Pop Art and Beyond: Tom Wesselmann." And the show is a doozy.

"Warhol and Lichtenstein eclipsed everybody," says John Ravenal, the museum's Sydney and Frances Lewis family curator of modern and contemporary art. Wesselmann "is now considered a blue-chip artist, but not having had a career survey before, people have not had an opportunity to see his work on this continent. So as famous as he was, he's little known."

Wesselmann was famous in his time. Along with Warhol, Lichtenstein, Jim Dine, James Rosenquist and Claes Oldenburg, he's considered one of six artists who defined America's pop art movement. Yet in some ways, labeling him a pop artist is too narrow a descriptor, as Wesselmann himself once said and as this exhibit so aptly demonstrates.

Coming to prominence with his Great American Nude series in the early '60s, Wesselmann stood apart from his fellow purveyors of pop art by focusing on a traditional and recognizable subject, the human figure. "But he wanted to incorporate elements of abstract expressionism," Ravenal explains. "Wesselmann was working in collage, with elements competing with each other. It was the energy of deKooning with recognizable parts for a dynamic interlocking."

The artist continued breaking pop rules by painting other centuries-old subjects such as still lifes, landscapes and interiors, even while incorporating humorous elements of pop culture and art history into his paintings.

"He combined painting and found materials like TVs and radios on billboard-scale canvasses," Ravenal notes. A Paul Cézanne-looking still life of fruit sits on a checkered tablecloth by a black and white TV, beneath a portrait of George Washington. A pink nude lounges next to a bottle of Beefeater gin and a six-pack of Coke bottles with an Amedeo Modigliani hanging overhead.

In the context of the time, this devotion to the traditional made him a radical in the art world, especially as conceptual art began to replace pop art as the latest shift. Also working against him was the rising feminist movement in the '70s, which criticized his lush female nudes as further objectification of women. Because Wesselmann had never seen himself as a pop artist, however, he was able to reinvent himself long after pop art had had its day.

Seascapes, a traditional motif, were next, although Wesselmann's treatment of them was anything but. The Dropout series used the negative shape of a woman's breast and torso through which the seascape, the only painted part, could be seen.

"The canvas was shaped to the image and the wall becomes the canvas," Ravenal says. Wesselmann furthered this concept by creating shaped canvasses — three-dimensional objects he referred to as paintings, not sculpture. "His goal was to compete with deKooning as a dynamic object but based on recognizable imagery, the figure," Ravenal says. "When you push it that far, it becomes abstract."

Always looking forward for new ways to express himself, Wesselmann began to imagine a drawing as a three-dimensional object, with the wall as the paper and the drawing an installation. The only problem with the "steel drawings" he envisioned was that the technology to create them didn't yet exist. After working with industrial firms and workshops to develop it, the artist used it as the basis of his work through the '80s and '90s. The colorful drawings are striking in their references to the past — incorporating elements of works by Fernand Léger, Lichtenstein and Warhol — and the future, with drawings rendered in three-dimensional space.

His last series, the Sunset Nudes, was done during the final two years of his life (Wesselmann died in 2004 at 73). This series had him returning to canvas and the figure, incorporating the lessons learned during the past 40 years in a way that paid homage to Henri Matisse, with an abstract structure that supports both the figure and the primacy of color. The work of a consummate artist, these late paintings brought the artist back full circle to his first love, the nude.

"Painting, sex and humor are the most important things in my life," Wesselmann famously said. This stunning show delivers all three. S

"Pop Art and Beyond: Tom Wesselmann" opens April 6 and runs through July 28 at the Virginia Museum of Fine Arts, 200 N. Boulevard. For information, call 340-1440 or go to vmfa.state.va.us.