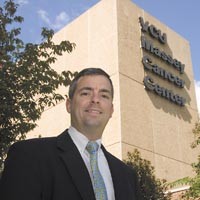 Call it good timing. Back in 1998, Todd R. Flowers was one of two graduate students at the University of Virginia's graduate nuclear engineering program. Immediately afterward, the school shut it down because commercial nuclear power seemed to have limited future.

But today, once-unpopular nuclear power is back in vogue because it doesn't contribute to global warming and has a strong safety record. Flowers, a nuclear engineer at Dominion, is riding the wave.

“Existing reactor designs are very safe, but newer ones are even better,” says Flowers, who lives with his two dogs in a house just west of the Museum District.

The Hampton native who also studied at Longwood University was selected to attend an intensive six-week course in 2008 at the World Nuclear University, run by several international nuclear groups to enhance “international education and leadership in the peaceful applications of nuclear science and technology.” He studied with engineers from such countries as Israel and Bangladesh. “I got an entirely new perspective from them,” he says.

He spends another kind of energy in his volunteer life. He serves on the board of ElderHomes Corporation, which helps fix the homes of elderly people who face financial strain. He also got involved at the Massey Cancer center at Virginia Commonwealth University in 2004, when his father was diagnosed with the disease. He serves on the board of the Massey Alliance, which is geared to young professionals.

Another endeavor is the Quoit Club, which helps run tours and backs building preservation with the Historic Richmond Foundation. “You find out a lot of neat stuff about the city,” he says. Example: “The Sauer building has one of the oldest neon signs in the country.”