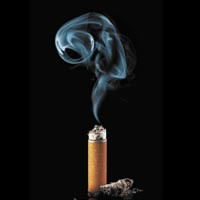 Last month The New York Times exposed the terms of a contract signed between Virginia Commonwealth University and Philip Morris USA, the nation's largest tobacco company. "The contract bars professors from publishing the results of their studies, or even talking about them, without Philip Morris's permission,?VbCrLf the Times reported. "If ?~a third party,' including news organizations, asks about the agreement, university officials have to decline to comment and tell the company.?VbCrLf
This arrangement may seem shocking to people who are hearing about it for the first time, but for people who are familiar with the cozy relationship between the university and the tobacco industry, it comes as no surprise. VCU and the industry have long supported each other in a number of ways.
Philip Morris documents now available on the Internet show that in 1991, while other medical schools including Harvard and Johns Hopkins were divesting their tobacco stocks, VCU's president, Eugene Trani, was ensuring the university would remain tobacco-friendly by negotiating a new smoking policy that explicitly permitted smoking in 41 out of 42 of the university's facilities.
The one area where smoking was not permitted on campus, according to a Philip Morris memo, was VCU's hospital, because this would have made the hospital ineligible for Joint Commission accreditation, and hence ineligible to receive Medicare and Medicaid reimbursements. Fortunately, a smoking policy from the university's human resources department, last updated in November 2006, indicates that smoking is now prohibited inside university buildings and that the "needs of smokers?VbCrLf are "accommodated?VbCrLf outside the buildings.
Philip Morris' chief executive, Michael Szymanczyk, was the keynote speaker at the university's graduation ceremony in 2003. In 2005, USA Today reported that the tobacco company had endowed a chair of international business at VCU's School of Business, and at that time Philip Morris was funding 12 studies at the university accounting for $4.4 million. Also in 2005, the company announced it was building a new, $300 million research facility in the Virginia BioTechnology Research Park, created in partnership years ago with the university.
The Richmond Times-Dispatch wrote that, thanks to the BioTech Park, "VCU is poised to become a partner in key areas of compatible research with Philip Morris.?VbCrLf Thus Philip Morris achieved the greatest public relations coup a tobacco company could possibly ask for: making the interests of a major medical school, hospital and school of public health compatible with the country's largest cigarette maker.
The close relationship between VCU and the tobacco industry alone should raise the eyebrows of people who are paying attention. While researching the relationship, I stumbled upon the additional fact that on Feb. 11, 2000, Trani was appointed a director of the Universal Corp., a holding company that owns Universal Leaf Tobacco, the country's largest purchaser and supplier of tobacco leaf. Trani still sits on the company's board of directors, collecting an annual retainer of $40,000, including stock options. An Aug. 9 filing with the Securities and Exchange Commission reveals that Trani owns 6,250 shares of common stock in Universal, allowing him to profit personally from domestic and foreign cigarette sales.
I called Dr. Trani's office to ask whether he or the university considered his affiliation with or stock ownership in Universal to be a conflict of interest, especially because VCU operates a school of public health and a medical college. The operator routed my call to Pam Lepley, director of news services for the university, who declined to comment on Trani's personal investments. She did explain, however, that the Richmond university heralds from tobacco country and that someone from "outside the area?VbCrLf would perceive the relationship between the tobacco industry and VCU "differently.?VbCrLf
I asked if the university was aware that more than 400,000 Americans die from tobacco use each year. She declined to comment. When asked about VCU's longtime relationship with Philip Morris, she cited the economic importance of the tobacco giant to the area, explaining that Philip Morris is more than just a cigarette maker. For example, the company has donated equipment to the university's School of Engineering that has nothing to do with cigarette making.
Those who follow the tobacco industry know that currying favor and maintaining relationships with major medical and research universities is key to the industry's ability to maintain credibility, and thus power, with legislators and regulators. The university is certainly helping Philip Morris out on that count.
When The New York Times reported on VCU's contract with the tobacco industry, researchers and research ethicists from other universities were astonished at its terms, which not only prevent professors from discussing the contract publicly, but also stipulate that all patents and other intellectual property created under the contract go to Philip Morris.
"When universities sign contracts with these covenants, they are basically giving up their ethos, compromising their values as a university,?VbCrLf Sheldon Krimsky, a professor at Tufts University who studies corporate influence on medical research, told the Times.
In a statement released May 23, Trani countered that the Times took the contract with Philip Morris out of context. "The New York Times article revolved around a research services agreement, but applied the standards of investigator-initiated research.  In other words, it failed to make the very important distinction between the two types of contracts,?VbCrLf Trani writes. "Research services agreements are not unusual in higher education. They provide for publication of research results while providing protection for the intellectual property that the sponsor and other research partners bring to the table.?VbCrLf
Of course, the university feels it has gotten far more positive than negative results from its long and deep relationship to Big Tobacco. As long as it continues to feel no pain over this relationship, it will undoubtedly continue it, no matter how unethical it seems to those of us who live outside tobacco country. S
Anne Landman is a tobacco document researcher with the Center for Media and Democracy and edits the tobacco document research at www.TobaccoWiki.org.
Opinions expressed on the Back Page are those of the writer and not necessarily those of Style Weekly.