We asked Richmond bartenders to create cocktails inspired by the ever-evolving mob of candidates running for Richmond mayor — and a farewell to the incumbent who’s leaving office. Here’s what they returned with. You might learn a little something about those running — and if not, you’re still sipping on a tasty cocktail.

Jeremy Wilson of Heritage and Marcelo Lopez of Sticky Rice

Chad Ingold: A solid foundation often is cited as a sign of success to come. Ingold’s foundation is education, which, for some reason, isn’t the most popular, but many people think is probably the strongest: Focus on education and over time every boat will be lifted and an educated city has the best chance to be a successful city. For Ingold, this drink is simplicity at its finest — the daiquiri is the epitome of the phrase “larger than the sum of its parts.” Often misunderstood and abused, the daiquiri at its core is a perfect combination of rum, lime and sugar. If you start with a daiquiri, you’re starting on the right path — in fact, you never have to leave that path. The daiquiri, just like education, is always your best option. (Update: Registrar says he failed to get enough signatures to qualify. Can appeal by June 27.)

Combine all ingredients with ice in a cocktail shaker, shake vigorously and strain into a cold coupe. 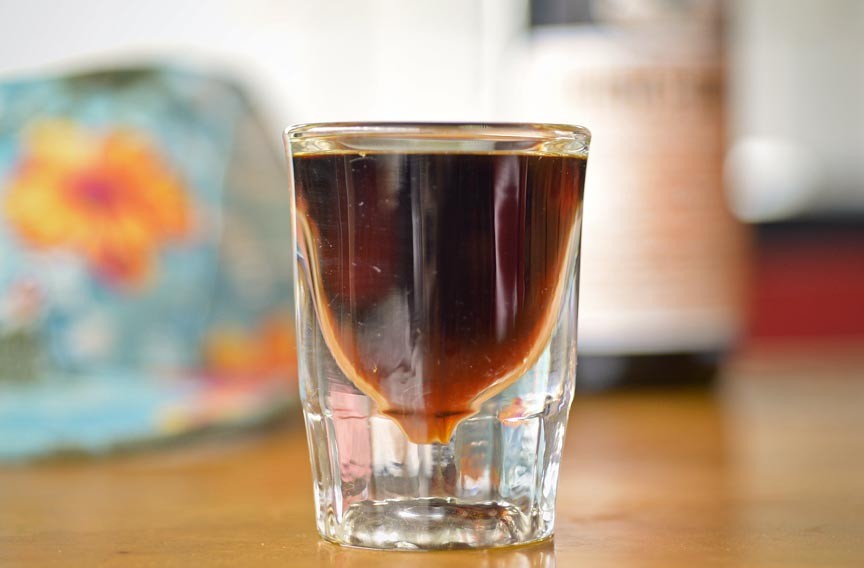 Nate Peterson: Fernet Branca is bitter liquor hailing from Italy. Created in 1845 to ease stomach pains, it’s become the unsung hero of the restaurant world. Bartenders and servers all enjoy Fernet, much as they like this candidate’s platform note of reforming the tipped wage atrocity of this city. In that way, Nate and Fernet are linked because both are omnipresent in the busy mind of a service industry employee. Also, both are kind of annoying. Fernet antagonizes the uninitiated — they don’t understand the attraction to a liquor that tastes of bitter medicine. Nate is a millennial, which by definition makes him annoying — and then he does something like buy every damn domain name of his running mates. Annoying.

The Nate Fernet
Pour Fernet from the bottle into a glass, drink and repeat.

Levar Stoney: We liken Levar Stoney to a vodka martini because he reminds us of what’s wrong with the establishment. While a vodka martini can be a good thing, it’s generally better with gin and also with more vermouth than most established martini drinkers are comfortable with. Vodka martini drinkers focus on the vodka when they ought to be focusing on the vermouth — much like Stoney is focusing on his experience, but that experience comes from a broken system that sucks. Treated with proper care, a vodka martini can be good, much like a candidate boasting years of experience, but generally the result really isn’t that great.

Combine the ingredients in a cold mixing glass, add ice and stir until properly mixed and diluted. Strain into an ice-cold martini glass and garnish with an orange twist.

Lawrence Williams: A riff on the classic boulevardier — which itself is a riff on the negroni. This one’s a little bitter for Williams — and how can he not be after running two times for mayor and never breaking 2 percent of the vote?

Combine all the ingredients in a large cocktail shaker and add cracked ice. Stir until well-chilled. Strain into a coupe glass and garnish with an orange twist.

Alan Schintzius: For Schintzius, we wanted to create a nonalcoholic drink since he seems to be a man of the people and fighting for the cause — he can’t allow himself to be clouded by the effects of that demon drink. Moreover, we wanted to use local and foraged ingredients to underscore his continued commitment to the entire city and not just to a few power brokers — and the addition of maple syrup as sweetener is inspired by his woodworking profession. All in all, it’s a classic summertime sipper — reminiscent of a more refined Arnold Palmer. (Update: Registrar says he failed to get enough signatures to qualify. Can appeal by June 27.)

In rocks glass, muddle the vinegar, maple syrup and lemon balm. Add cracked ice and fill with tonic. Pour back and forth between the glass and a small cocktail shaker to combine.

Jack Berry: This is the opposite of the 99 Percent — it’s a drink fashioned along the classic millionaire cocktail. The counterpoint candidate to Schintzius, Berry seems to represent the business interests of the city and sets himself apart from the majority of residents with his previous six-figure income from Venture Richmond. Not that we’re taking political sides, but just because you put on the Richmond Folk Festival doesn’t mean you’re one of the folk. A neat little drink with nice depth and airiness — almost contradictions in flavor — the orange cream citrate rounds it all out with a nice zing.

In large cocktail shaker, combine all the ingredients and shake. Add cracked ice and shake again feverishly. Strain into a coupe.

Michelle Mosby: This drink is fresh, young and vivacious — and its spirit is rooted in Richmond, much like the candidate. It’s refreshing at first sip, but only time will tell if over-indulgence will lead to a hazy tomorrow.

Fill a cocktail shaker with ice and shake the ingredients together vigorously. Strain into a highball glass over ice. Top with club soda. Garnish with a cucumber ribbon.

Bruce Tyler: I recently had dinner with an old friend who’s known Bruce Tyler for many years. He suggested that a mint julep would be appropriate. Here’s a variation. I think this is the one.

The $316,000 Green Alley Julep
2 ounces bourbon
1/2 to 1 ounce simple syrup (I like my juleps sweeter and mintier, but some can’t stand the sugar)
10-12 mint leaves for muddling
1/2 ounce of green Chartreuse

Muddle the simple syrup and mint leaves well in a julep cup. Do not grind the mint! Simply bruise it. Add the bourbon and crushed ice. Stir until the cup is frosty. Garnish with an obnoxiously large sprig of mint, as well as the other leafy greens you have on hand. I use all the scraps I have from my community supported Tomten Farm portion. Try to make the garnish look like a leafy urban paradise, but do not spend more than $316,000 on garnish greens (i.e., 526.67 full, 26-week Tomten Farm shares).

B.J. Junes: As of 11:39 p.m. on Thursday, June 16, vpap.org still listed Junes’ campaign contributions at zero. Come on, Junes! You think we’re going to shake you up a cold glass of elected office when you have no money to pay for it? Take the water and move along! Actually, on second thought, since you served on the Henrico County Parks and Recreation Advisory Commission, this drink can be garnished with some of the grassier greens left over from Tyler’s elaborate bouquet, and we wish Junes the best for the development of a grass-roots campaign. Godspeed, B.J.!

Pour the water over the ice in a plastic to-go cup. Garnish with greens.

Mike Dickinson: Make it rain, Mikey D.! As a gentleman’s club owner, we found it appropriate to add a little spice to a little bit of rain. We’ve paired Rain Organic Cucumber Vodka with the spark of a serrano pepper to cool you off in the afternoon this summer, but heat you up just before a night out. (Update: Dropped out to run for City Council.)

Sprinkle the cilantro and serrano pepper slices into a glass. Fill with ice and add the lemon juice, sugar, vodka and club soda. Stir. Garnish with the cucumber and a slice of lemon.

L. Shirley Harvey: File Not Found. And files don’t seem the be the only thing missing. I took it back to 1990, just like her Geocities-inspired website, lshirleyharvey.com. This drink will wash your sins away with four simple ingredients — on the rocks, of course! (Update: Registrar says she failed to get enough signatures to qualify. Can appeal by June 27.)

Rim a highball glass with sugar. Muddle the jalapeños. Add ice and pour the mescal and juice over top. Stir. Add a splash of club soda and garnish with a slice of orange and lime.

Joe Morrissey: This drink is intended for our under-21 customers.

Pour the orange juice, ginger ale, cider and grenadine over ice. Garnish with an orange slice.

Jonathan T. Baliles: I don’t know him personally, but I know I’ve served him, and he’s a nice man. He seems to love the River City with his heart and soul. Baliles has a lot of political experience and pulls some serious weight with people of all walks of life — including the affluent, the artsy, the outdoorsy and the blue-collar, as well as the less fortunate. He’s a serious candidate and a force to be reckoned with. Because Baliles hails from the Museum District, I imagine that he has a little dough to spend on a cocktail. I’m going with an Old Pal made with Reservoir rye. It’s classy, off-the beaten path and would work well in a flask down by the rivah.

Stir the ingredients in a mixing glass and strain into a cocktail glass. Garnish with a twist of orange. Or pour it into a container and float down the river.

Amon Rayford: He’s young and hungry for social justice. He’s also a musician and cares deeply for the disenfranchised folks of Richmond, including Richmond Public School students, the homeless and the poor, so I’m assuming that he doesn’t spend a lot of money out on the town drinking. He seems smart, kind and generous, and I’m think he’d probably just go down to the ABC store and buy a bottle of midrange whiskey and share it with the homeless. Rayford also seems like an old soul, so I’m going with a bottle of Old Grand-Dad, currently priced $18.99. I know he doesn’t have a lot of political experience, but his idealistic platform is touching. He was a fighter from birth and I feel like even if he doesn’t win in this mayoral race, this isn’t the last we’ve heard from him. (Update: Registrar says he failed to get enough signatures to qualify. Can appeal by June 27.)

The Determined Idealist
Buy a bottle of Old Grand-Dad, pass it around.

Mayor Dwight Jones: He’ll be gone but not forgotten. So here’s a farewell cocktail for Jones. A pastor from Philadelphia who’s served as our mayor for seven years, he built four new schools and a (questionably built) new jail. His mayoral career has been dotted with much controversy, from stadiums, tea party discrimination, an NFL training camp, broken-down schools and potential church-construction conflicts of interest.