Toast of the Town

Butcher Brown celebrates a string of hard-earned victories as headliner at the final Friday Cheers concert of 2021. 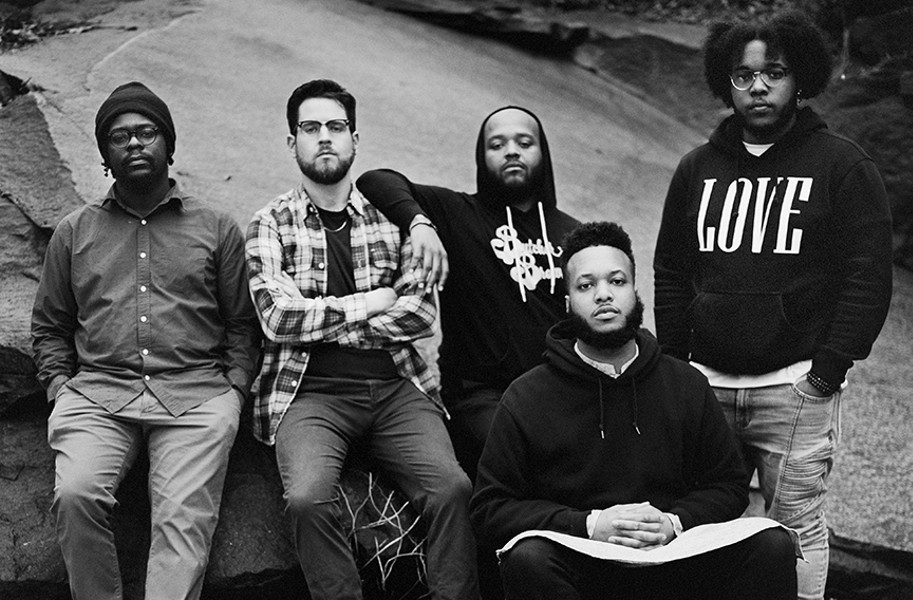 On the roof of the Hofheimer Building in Scott's Addition, filming a National Public Radio Tiny Desk Concert that would tally 100,000 views within a week, Butcher Brown sat atop the Richmond music world in more ways than one on April 5.

The award-winning video series is typically taped in a snug corner of NPR Music’s Washington office, but featured artists have been setting their own stage during the pandemic. Against a picturesque skyline backdrop, the quintet delivered a tight, four-song set, ending with two cuts from the album “#KingButch,” released in the fall on the prestigious Los Angeles-based Concord Jazz label.

“#KingButch'' and the Tiny Desk performance are two in a string of hard-earned victories for Butcher Brown, which was positioned for a breakout year at the start of 2020. The group’s Concord signing was announced during a trip to the West Coast in January, the new album was finished and the road was calling. “Our tour would have been insane,” guitarist Morgan Burrs says.

So how did these versatile purveyors of jazz, funk, rock, and hip-hop keep rising at a time when tours everywhere were grounded?

“The flow of traffic in the music industry changed because it had to,” explains trumpeter, saxophonist and emcee Marcus “Tennishu” Tenney. “[The pandemic] was kind of like putting a big rock in the middle of the river. The water changes direction.”

In early April, less than a month after venues everywhere fell silent, the group posted the first entry in its remotely recorded“Mothership Monday cover video series. “The videos allowed us to shift the whole weight of the business to something else,” Tenney says.

Paying homage to their predecessors, the band has reinterpreted songs by Bob James, Roy Ayers, Funkadelic and others. Combining individually recorded video footage became a go-to approach for bands dutifully quarantining, but being first to market and last to quit has helped Butcher Brown stand out and stay connected.

“We always joke around and say that’s like our show every week,” drummer Corey Fonville says. “That two and half minutes that [fans] get. We try to put our best into it – put everything into it.”

That spirit of generosity – of having more to give than any one set can contain – is part of what makes the band so thrilling. Since its 2009 founding, Butcher Brown has built a reputation for stylistically ranging shows. The band members draw on both formal training (four of five members studied jazz at Virginia Commonwealth University, Fonville at the Brubeck Institute) and musical telepathy (“We read each other’s minds so well,” Fonville says) to make each performance unique.

“We all come from a spirit of improvisation,” says bassist Andrew Randazzo, “and we’re all open to wherever the music is going to go. That keeps us excited about the music, [and] that means our die-hard fans that are going to come see us every time – it’s not going to be the same show you saw last time. Ever.”

The studio work is similarly varied and abundant, too. Fonville says the group is working on new stuff, always – “so much music,” he adds in amazement.

The “#KingButch” sessions yielded a characteristic surplus, and five tracks that didn’t match that album’s scope and sequencing were released this month as an EP entitled “Encore.” Starting with horn-soaked instrumental soul and ending with a vehicle for Tennishu’s wordplay, the recording’s 15 minutes cover more ground in terms of genre than many bands do in a career.

It certainly helps when your band’s headquarters doubles as a home studio operated by a production virtuoso. While he mainly plays keys in Butcher Brown, Devonne Harris, also known as DJ Harrison, is a sought-after session multi-instrumentalist and producer. Jellowstone Studio, where “#KingButch” was recorded, is the ever-evolving embodiment of his passion.

“I’ve always been recording and collecting equipment,” DJ Harrison says, “since I was like 12 or 13. I’ve always wanted to have a space wherever I was to be able to get my ideas out as quick as possible. ... As I got older and I’ve acquired more gear and acquired more space here, I wanted to provide a safe haven.”

The ability to work from home came in handy when launching “Mothership Monday,” and the remote routine was crucial when the opportunity arose to work with ESPN on new theme music for “Monday Night Football.” Facing a quick turnaround, the quintet added fresh backing to Little Richard’s 1956 hit, “Rip It Up,” expanding its reach to an audience in the millions.

“In order for us to actually finish that by their deadline, we had to start the ideas at home,” Burrs remembers. “We had all dialed into that type of workflow where we’re working apart from each other but could build ideas.”

As the September news of the “Monday Night Football” placement reverberated through a coronavirus-scattered Richmond music community, it was clear that Butcher Brown is as near to the beating heart of the scene as a band could be. Its support is sweeping and collaborative efforts are countless.

“Every single musician in that band is so high-caliber and impressive,” says Erin Lunsford, Richmond-based singer, songwriter and lead vocalist for Erin & the Wildfire. “We just enjoy watching them play and we’ve had the opportunity to play with all of them in various capacities, and it’s such a joy.”

Randazzo compared the Richmond scene’s interconnectedness to a spider web, while Tennishu invoked the Marvel comic universe. “Everybody knows everybody,” he says.

“We all want to make music that stands for something,” DJ Harrison explains. “We want to be able to put our feelings and put our own inspiration from others, and channel that into our own music to be able to inspire the next person. Or [to] replicate that feeling of camaraderie and community because it seems like that’s what we need the most of right now.”

That cycle of inspiration came full circle in June 2020 as a result of a “Mothership Monday” tribute to saxophonist and Plunky & Oneness leader James “Plunky” Branch, whose influence and organizing efforts have helped shape the city’s jazz community since the 1970s. “African Rhythms” is among Branch’s most celebrated songs and Butcher Brown’s take on it linked timelines of Richmond jazz leadership.

Shortly after the new version hit YouTube, Branch sat in with the band for a pop-up concert inside the newly reclaimed Marcus-David Peters Circle. Branch also taped a set with Butcher Brown for the Richmond Folk Festival’s “All Together Now” program, whose October broadcast helped fill the void left by the in-person festival’s cancelation.

“I’m a fan of their music,” Branch says. He especially admires the “piety” he’s seen in their approach to stylistic diversity. “They don’t dabble in different genres, they immerse themselves in them and try to absorb what those genres are about. I respect that about them.”

“Plunky’s been a family friend of my folks for a while,” Morgan Burrs says. “Plunky’s always been watching and been supportive and he’s always been a champion of the scene, so it was cool to bring those [worlds] together.”

With the need for social distancing easing, the band is looking forward to another tradition that brings Richmond together: Friday Cheers. It’s headlining on June 25th – its third Cheers appearance, following sets in 2015 and 2018. Tennishu can’t wait.

“I feel like all of Richmond always shows up,” he says of Friday Cheers. “You’ve got the water and you’ve got people as far as you can see and there’s beer trucks everywhere. That’s Richmond. It’s going to feel good to be out there.”

Butcher Brown performs with the Charles Owens Trio at Brown’s Island for Friday Cheers on Friday, June 25, from 6 to 9:30 p.m. UPDATE: The show has sold out.