A new Tuscan Mouth to feed, more space at Tarrant's and a Fat Goat gone. 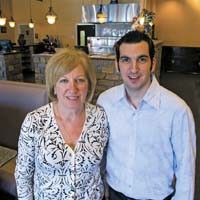 To Tuscan Taste: Giuseppe Carollo, who's been turning out veal scaloppini and pizzas since he was in grade school, isn't daunted about opening his first restaurant this week at the age of 27. It's Bocca Toscana, meaning Tuscan mouth, a cafAc in the Village Shopping Center. There you'll see the young Carollo in dough-tossing action via framed newspaper clippings with his father, Frank, whose pizzeria career started a generation ago in Brooklyn and led to Frank's in the Stony Point shopping center in 1991. That pizza has a cult following, and now an offshoot is owned by mother, Elizabeth Carollo, and son.

Bocca Toscana has been completely refigured from its brief former life as a wine bar, with new stone counters, 70 seats in booths and at tables, and decorative items collected on the Carollos' travels in Italy. “We want people to feel at home,” Giuseppe says of the family-oriented dining room. “It's exciting to see how ready the neighbors are for us to open.”

The menu will be familiar too: pizzas, pastas, hot sandwiches and Italian standards, with weekend specials, beer and wine and moderate prices. “In order to make great food you have to use quality products,” Carollo says, so there's no skimping on mozzarella or even flour. With a lifetime spent watching his father's cream sauces and salmon come together for an appreciative audience, Carollo is “just ready to be open,” he says. “It's hard work, you know?”  Lunch and dinner Monday through Saturday, closed Sunday. 7021 Three Chopt Road. 288-7773.

More, Less and None

Time Change: With the impending arrival of their first child, Avenue 805 owners Sarah and Jeff Baird are devoting their cafe to dinner hours only from Monday to Saturday and Sunday brunch. They're now accepting reservations through www.opentable.com. 805 N. Davis Ave. 353-2505. www.avenue805.net.

Not Goat: After a short, tumultuous run and a sense of lost potential among its local-foods fans, the Lakeside cafe once called Zed and later the Fat Goat closed after Thanksgiving. Owner Lisa Granger, whose recent online bio called her a restaurant visionary, could not be reached for comment. The adjacent salon remains in business.