A look into the federal grant program and what its new restrictions could mean for Virginia’s family planning services.

When Planned Parenthood Federation of America withdrew on Aug. 19 from Title X, the nation's only federally funded family planning program for low-income patients, the hashtag "Bans Off My Body" went viral.

On Sept. 12, Vice President Mike Pence said he and the president are committed to abolishing abortion in the U.S. and marked it a win for the pro-life movement. The acting president of PPFA called the administration's gag rule, which prevents any abortion provider from receiving Title X funds or referring a patient to abortion services, a direct attack on reproductive healthcare and the nonprofit. Planned Parenthood serves nearly 41% of patients who use the Title X program.

The New York Times released an op-ed with the headline "It Just Got Harder to Get Birth Control in America." Musician Billie Eilish pledged to donate proceeds from her upcoming concert to Planned Parenthood.

Many people remain confused as to what this means and what Title X really does.

Rightfully so, says Emily Yeatts, the reproductive health unit supervisor for the Virginia Department of Health. The program is 300-pages long and the media isn't helping.

"People in the Richmond area can still access family planning services," Yeatts says reassuringly. "I don't want people to hear the news and think, 'I have nowhere to go for birth control.'"

But Yeatts knows that other states in which Planned Parenthood was the main Title X provider are not so lucky.

It may take a while to see the full effect of Planned Parenthood's withdrawal, she says, and its impact on the 4 million people across the country who use Title X. But on Sept. 10, Planned Parenthood confirmed the upcoming closure of two clinics in Cincinnati after a loss of funding, which some see as the beginning of a domino effect.

Neither of those clinics provide abortion care. Both serve mainly low-income people of color.

"I'm not sure who is going to be able to step in and help folks who don't have insurance and are low income," says Paulette McElwain, president of the Virginia League for Planned Parenthood. "They'll be scrambling to find philanthropic sources to help as best as they can." 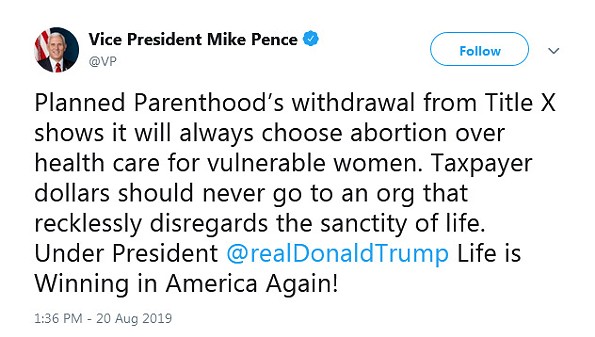 In May 2018, the Trump administration proposed barring abortion providers from receiving funds from Title X. Then in March, it prohibited Title X health centers from referring patients to where they can access abortion, even if a patient requests the information.

The newest regulations, to be enforced Sept. 18, officially put the proposal in action. It also requires physical and financial separation of any organization that provides abortion services in addition to already prohibiting abortion referrals. They've been legally challenged by Planned Parenthood, the American Civil Liberties Union, the American Medical Association and others. The rule was blocked by a federal court of appeals until Aug. 19, the deadline for health centers across the country to explain how they'd comply with the new guidelines.

As a result of the regulations, Planned Parenthood Federation of America withdrew from the program and took a $60 million funding cut.

"This is a choice [the federal government] made," McElwain says. "Planned Parenthood did everything they could to stay in the program."

Oral arguments are set for Sept. 23 in a San Francisco federal appeals court to overturn the gag rule. The American Medical Association, alongside 21 states, are plaintiffs in the suit.

The pro-life activists argue that taxpayers who are anti-abortion shouldn't have their money indirectly funding an abortion provider, but healthcare professionals say the gag rule limits their ability to fully provide care and options to patients.

"Run the scenario with similar prohibitions on explanations of the full spectrum of medical choices for diabetes or heart disease," Tom Ewing, a 30-year physician and plaintiff on the suit told the AMA in April. "That — objectively speaking — means not providing patients with all the information they need to make smart decisions about their healthcare."

The Nitty Gritty of Title X

With almost half of Planned Parenthood's funding coming from federal and state governments, locations where patients rely on Medicaid and Title X for birth control, cancer screenings, pap smears and sexually transmitted infections testing will be most affected.

Since Title X offers these services free of charge for patients below the federal poverty level, it's projected to limit access for people who can't pay out of pocket or don't have private insurance.

"This is a true safety-net program that meets the needs of women across the country," Yeatts says.

But she wants to make something clear: Title X funding never went toward abortion, and any provider of both family planning services and abortion had to separate those funds under federal law. Since 1976, the Hyde Amendment has made government-funded abortions illegal except in instances of rape, incest or fatal risk to the mother.

Virginia can only fund abortions if the patient is financially eligible, has reported a rape to law enforcement or local health district offices, and a physician completes an application prior to the appointment.

However, rape accounts for 1% of reported reasons for getting an abortion, with incest making up less than 1% according to the Guttmacher Institute's 2005 report on sexual and reproductive health. In 2018, Florida's abortion report cited similar results.

So why is it controversial for these exceptions to be excluded from state abortion laws?

"Pro-choice groups see rape and incest exceptions as the canary in the coal mine when it comes to extremism," Mary Ziegler, a professor at Florida State University College of Law told USA Today in May. "They argue … if you're willing to abandon these exceptions, then there's no saying when you're going to stop."

What This Means for Virginia

In May, the Virginia General Assembly stopped funding cases of fetal anomalies, such as high risk of the fetus being stillborn. The Virginia Department of Health's website currently offers links to local abortion funds that can provide assistance in these cases, such as Richmond Reproductive Freedom Project.

The VDH is Virginia's only Title X grantee and currently receives $4.5 million for distribution to 130 clinics across the state. This serves nearly 38,000 patients. But Title X funding varies from state to state. Other states have upward of nine grantees.

In Richmond, there are more than 10 Title X-funded offices within the Richmond City Health District in Gilpin, Creighton, Hillside, Southwood and more.

Funding is dependent on caseload as well as health statistics like higher teen pregnancy rates and the number of women in need of contraceptive services. Most of these clinics operate in rural areas where patient volume isn't high due to smaller populations. In almost 40% of Virginia locations, Title X-funded clinics are the main provider of family planning services.

Although there are options for reproductive health care in Virginia, there's still work to be done. It's about figuring out what the community needs, Yeatts says, and that can look like accessibility to public transportation, not only having morning clinics or offering a mobile unit for comprehensive family planning in rural areas.

Nationally, it all banks on the diversity of the Title X network.

Virginia League for Planned Parenthood never had funding. McElwain attributes it to Virginia's conservative politics, but even then, the nonprofit notices an increase in need for primary care in Richmond, where almost 30% of residents live below the poverty line.

"We've never been in a position where we're booking a week out," she says. "Ideally if you're trying to get access to contraception, you can get it the next day."

Last fall, Virginia launched a pilot program to cover costs of hormonal IUDs and implants for people up to 250% of the federal poverty leve, which equals $53,325 for a family of three. There are five providers in Richmond alone, including Planned Parenthood. Called the Long-Acting Reversible Contraceptives initiative, the program is funded through May in an effort to bridge the gap in birth control access. But it doesn't include other methods.