After a moment of silence, Sarah Dunbar Harper addresses the crowd that’s gathered for this month’s meeting of Moms Demand Action for Gun Sense in America, a national organization that advocates for gun violence prevention legislation with statewide and local chapters across all 50 states.

“We are deeply shaken by such a horrible act of violence. Let’s take a moment tonight to let it sink in that these feelings we are experiencing have been a daily reality for many people in our country who have lost loved ones to gun violence,” Harper says. “So here we are tonight, and we want to turn our grief and frustration into action.”

For about an hour, Virginia Secretary of Public Safety and Homeland Security Brian Moran speaks about statewide legislature and fields questions from impassioned parents. He admits that Virginia’s legislative successes on the gun control front have been “limited,” noting that bills to ban assault rifles, expand background checks and limit gun sales to one gun per month per person have all either died in the General Assembly or been repealed in recent years. He describes himself as a “glass half-full kinda guy,” though, and assures the group that grassroots efforts can and will create change, especially if that energy makes its way to the polls. 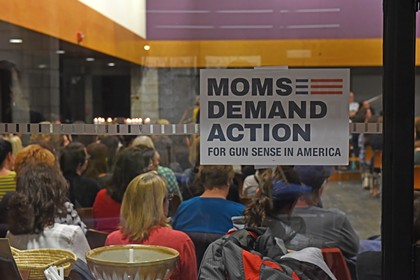 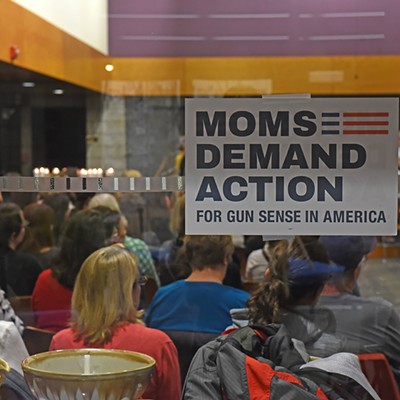 Moms Demand Action
By Scott Elmquist
Click to View 7 slides
“We’ve reached a tipping point,” Moran says. “Seeing those students last night being so articulate and eloquent, forceful and knowledgeable, was inspiring to us all.” tweet this

“We’ve reached a tipping point,” Moran says. “Seeing those students last night being so articulate and eloquent, forceful and knowledgeable, was inspiring to us all.”

Most gun-related bills for this year’s General Assembly session are dead, he says. But there’s one left: Senate Bill 715, firefighters and emergency medical services providers carrying a concealed handgun. A member of the audience describes this bill as a “gateway to arming school teachers,” and Moran encourages people to reach out to their representatives in opposition to the bill.

As the question-and-answer session comes to a close, one attendee stands and asks Moran whether the Virginia Department of Health could explore issues related to gun violence prevention. The Centers for Disease Control and Prevention can’t do it on a federal level, she says, so why not try it on a state level?

“That is a fabulous idea,” Moran says to applause. “We will pursue that.”

When Harper returns to the mic, she addresses the most prominent question of the night: “What can we do right now?” Especially with midterm elections coming up later this year, Harper says there’s no shortage of tasks for volunteers: House and Senate visits, canvassing, making phone calls, attending town meetings and candidate forums, engaging candidates on issues related to gun violence prevention. Moms Demand Action will have a presence at upcoming events and festivals like the South of the James Farmers’ Market on March 10 and April 14. They’ve also got a roundtable with Senator Tim Kaine tentatively on the schedule for next Monday, and a high school voter registration event with a date and location to be determined.

“We are just a powerhouse,” says Harper. “We are going to be so known at that Capitol. They will see us coming down that hallway with our red shirts, and they’re gonna say, ‘Oh, here they come.’ They’re going to know us so well that they’re going to be inviting us to their children’s birthday parties.”