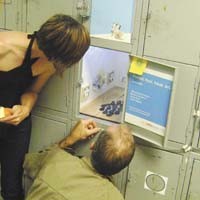 In what may be the smallest art heist in history, three tiny reinforcing-bar pieces were stolen from a Real Small Art League exhibit at Virginia Commonwealth University.

Inside a 14-by-19-inch locker on the third floor of the Fine Arts Building, Richard Garrett Jr.'s art is featured in an exhibit with a tiny wooden floor, tiny paintings on the tiny walls and tiny exhibit lights. Garrett, a member of the Real Small Art League, says he noticed something was amiss around June 19.

He noticed three pieces were missing: medallions imprinted with smiley faces that formed a pattern on the wooden floor. Garrett notified the art gallery's director, Erin Neff, and then posted a message on the art league's Web site asking the thief to come forward — anonymously if necessary.

The size of the league's work allows it to give away pieces because they're inexpensive and less time consuming to create than bigger pieces, Garrett says. For the stolen pieces, Garrett heated the metal and hammered it into shape, adding the tiny smiley faces.

Garrett's drawn to small art mainly because of its affordability, he says. “So often you see a painting for thousands of dollars,” he says. “A lot of people feel that only rich people can have art, which doesn't have to be the case.”

As for the theft, Garret isn't too heartbroken. “I thought it was a compliment,” he says. “Someone was that industrious to worm their way in there to take three of my pieces.”

Clarification: In earlier print and online versions, Style failed to identify other contributors to the Locker 50b Gallery. Other artists featured in the exhibit include Tiffany Glass Ferreira, Shelia Gray and Sarah Stegal.