Candela Gallery provides a snapshot of the new old-time music scene with a new exhibit. 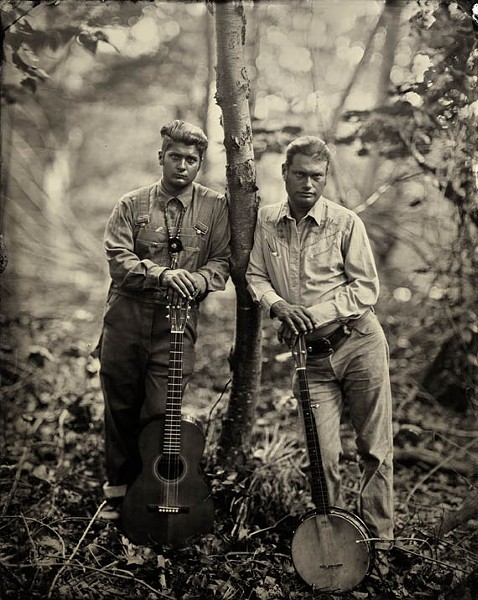 “Matthew Kinman and Moses Nelligan, Clifftop, WV” is one of the photos by Lisa Elmaleh featured in the “American Folk” exhibit at Candela Gallery. Kinman (Roan Mountain Hilltoppers) and Nelligan are modern practitioners of old-timey folk music.

Visitors to "American Folk," Candela Gallery's compelling new photography show, could be forgiven for presuming it's a show about left-handed folk musicians.

But don't let the old photography technique fool you.

Photographer Lisa Elmaleh works in the wet collodion tintype process of the 19th century, her way of preserving the essence of a tradition distinctly tied to place. The marriage of this process and her subject matter — present-day folk musicians living in and around the Appalachian Mountains — is essential to understanding her work.

"The traditional and historic nature of the music reflects in the tintype process," she says. "As urbanization becomes more prevalent in America, American rural identity and culture becomes obscured."

When tintypes became all the rage in the 1850s, portrait-sitters understood that each tintype was a camera original so the result would be a mirror image, reversed from reality. Denizens of the 21st century might not initially realize this, but a folk musician with an eye for instruments would — such as Josh Bearman, teacher for Richmond Public Schools by day and a longtime practitioner of old-time and bluegrass music by night.

Seeing Elmaleh's show through the eyes of Bearman — who plays mandolin, banjo, guitar and upright bass — provides a crash course in the state of present-day, old-time music.

Looking at "Janice Birchfield, Roan Mountain, TN," Bearman sees more than just a woman with a washtub bass, a traditional instrument comprised of a broom handle, a washtub and twine. "She's part of the Roan Mountain Hill Toppers, a whirlwind of a band who actually live on top of Roan Mountain," Bearman says. "They do a rough style of old-time music. I'd call them the grunge band of old-timey music."

He recalls seeing the group's RV among those of the other musicians at the Old Fiddlers' Convention in Galax. It was "functional," he says, laughing, "but not a bit concerned with image."

Another work, "Pat Shields. Danielsville, GA," shows Shields' hands on a mandolin. "One thing that's great about old-timey music is it wasn't done by performers, it was done by working men," Bearman says, pointing out the stubby, scarred hands in the picture. "Those hands have worked a long time and been smacked a lot. These are people who work hard all day and just play music at night."

Elmaleh always considered herself a bit of a photographer, she says, but didn't acknowledge it fully until her first road trip when she was 17: "I drove out to Roswell, New Mexico, by myself with a medium-format camera and fell into making my work."

Her fascination with folk musicians began with the Hogslop String Band, whose members she met at a wedding. Enchanted that they were playing tunes she recognized — old-time, traditional music — she also was startled to realize that such music was still being played. On a whim, she photographed them on her way to the Everglades, resulting in one of the band members offering to take her to his home in northwest Georgia to meet his banjo-playing mother and the family friend who'd taught him guitar.

"The process of meeting folks to photograph has always been organic in that way," she says. "One musician will introduce me to another or I will get a number or an address and see if and when I can go photograph them."

Bearman has plenty to say about "Hogslop String Band, Harpeth River, TN," a photograph of the seven band members standing in a creek — starting with how they're a big part of the east Nashville old-time music scene. "They're very talented musicians, a big ruckus of an old time band," he says. "They play Georgia-style, a showy style of old-time music from the '20s, back when Atlanta was the Nashville of its day, with lots of commercial recording going on."

'Looking at the characteristically fine tintype detail of the Hogslop musicians in the photograph, it's difficult to miss that the words painted on the washtub bass are backward, a mirror image of what Esmaleh saw when she shot the photograph in 2010.

And as Bearman is quick to point out, they aren't all left-handed. S