With the Capitol in Richmond being closed for extensive renovations and expansion in expectation of the 400th anniversary of Jamestown's settlement in 2007, it was decided that Williamsburg would be a picturesque alternative site for the inauguration.

Lt. Gov. Timothy Kaine spent part of the day before his inauguration volunteering with Habitat for Humanity on a house-building site. “It was 50 degrees and sunny,” he says. “I thought, I'm really a lucky guy.”

An inaugural gala was held the night before at the College of William and Mary convocation center where the Beach Boys performed. Kaine says the audience was warmed up by the jazz band from Richmond's Maggie L. Walker Governor's School in which his son, Nat, performed. During a performance by No Speed Limit, he says, “I played the harmonica.”

Early in his big day, Kaine and his entourage started their morning attending a prayer service at Williamsburg's Bruton Parish Church. It was there that he realized the pants legs of his rented morning suit had not been hemmed. On the way to the inaugural at the reconstructed colonial Capitol, Kaine says, someone scrambled “and found some duct tape, and was able to adjust the hem.” 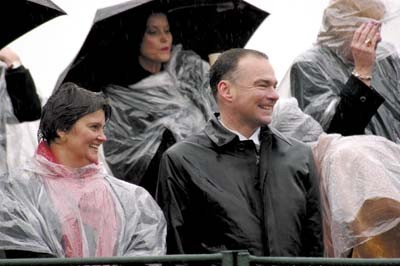 Despite driving rain, Gov. Timothy Kaine and his wife, Anne Holton, are all smiles at his inauguration in Colonial Williamsburg Jan. 14, 2006.

“There's a playbook for inaugurations at the [Richmond] Capitol for the incoming administration,” Kaine says, suggesting it was a bit of a challenge to improvise a new script. And if the weather the previous day had been promising, a half hour before the ceremonies the weather changed. “The weather was horrible, cold rain,” Kaine says. “Two staffers, however, Leigh Ann Collier and Matthew Felan, made a good call to put plastic ponchos under every seat in the platform. They came in handy.”

Kaine admires those who soldiered on, water-logged, in the inaugural parade. “They were excited,” he says, “but very soaked.” Among the last groups to pass the reviewing stand were Minds in Motion and Team Double XL from the Richmond Ballet, whch Kaine had invited to participate. Annella Kaine, the governor's daughter, was a member of the troupe.

That evening, after an inaugural ball in Williamsburg, he says, “We sped up to Richmond for another ball at the Richmond Convention Center for neighbors and friends.”

“It's even more fun to be sworn in as lieutenant governor,” Kaine says, recalling his taking an oath almost eight years ago administered by his wife. “Anne gave me the oath of office” — Judge Anne Holton was a juvenile and domestic relations judge. “All you do is show up and have fun and have to not worry about the logistics.”

As he was about to take the oath as governor, Kaine may not have been aware that his predecessor, Mark Warner, was having qualms about leaving office. “There was a surreal moment when Governor Kaine was announced and walked onto the platform,” Warner says, “and then, minutes later, after he's taken the oath of office — in a moment — I was escorted off the stage. It's been said that I left boot tracks in the dirt. I loved being governor.”

But Warner says he had a last word: “Someone had made a life-size cut-out of me. I left it in the mansion in the shower of the governor's bathroom.” After events in Williamsburg and a ball in Richmond, exhilarated but exhausted, “Governor Kaine would have returned to the mansion only to find ‘Mark Warner' in the shower."