Scott Elmquist Roben Farzad grew up in Miami during its cocaine boom of the 1980s. His first nonfiction book took 23 years to report and write — including interviews with smugglers and dealers from the drug trade.

Like many households in the United States in the mid-1980s, Roben Farzad's family watched "Miami Vice" on Friday nights, transfixed by the fast-moving pastel suits, sports cars and speed boats set to an MTV soundtrack.
But being north Miami residents, they lived considerably closer to the action.

"I remember once I was fishing with my cousin," Farzad says. "We were on Biscayne Bay, and we thought we saw a kilo of cocaine float up to the wall. I held it up against the wall and told her to call the Channel 7 news truck so we could be heroes, because Nancy Reagan and DARE were telling us to stay off drugs."

Alas, the kilo turned out to be a pillow thrown overboard from a cruise ship.

"Miami Vice" was fiction after all, but it was based on truths that are stranger than fiction, as Farzad would discover later as an adult.

Farzad, 41, now lives in Richmond with his wife and two children, and he's the author of a new nonfiction book, "Hotel Scarface: Where Cocaine Cowboys Partied and Plotted to Control America," published by Penguin Random House in October. Already, he's fielded an offer for a series based on the book, which took 23 years, on and off, to report and write.

The genesis of "Hotel Scarface" takes place in 1994, as the teenage Farzad was working a summer job before entering Princeton University as a freshman. He was selling frozen lemonade, and his boss told him to stand on a corner in Coconut Grove, an upscale neighborhood lined with mangrove trees and populated with shops and cafes. Yet Farzad found himself in front of an abandoned building that had been battered by Hurricane Andrew in 1992 and was now used by homeless people and drug addicts.

"I'm not given to phantasmagoria, I'm not given to the supernatural but something happened in that tableau in the spring of '94, when I saw what I saw," he says. "When I saw the addicts in the building, just as I was about to leave the city of my childhood for good."

In the early days of the internet, Farzad figured out what exactly the building was and a bit of its notorious history. This was the Mutiny hotel, where drug kingpins, celebrities and Miami elite — as well as Miami police detectives — partied and made deals during the cocaine industry's high point in the 1970s and '80s.

This decadent scene was a far cry from Farzad's upbringing as a Jewish Iranian immigrant whose family moved to Florida in 1978 on the heels of the Iranian revolution. His aunt, who was in medical school in Miami, persuaded Farzad's family to leave everything behind and migrate. She set them up in an apartment nearby, while Farzad's father, a doctor, struggled to learn English and take a language exam. As a small child, Roben says he was confused and prone to cry. At 11 p.m., his family watched "Nightline" to see what was happening in Tehran.

"It was a time of volatility," he recalls, both in Iran and in Miami. Drug world murders and rampant inflation in his new home, and in Iran, political and financial chaos. Eventually, as an elementary school pupil, he "came out of that haze" and started to focus on academics.

"I always say, 'Stay in school, drink milk, get good grades, make your parents proud,'" Farzad says, laughing. And that's what he did, making his way to Princeton University for his undergraduate degree. But Farzad found himself going home during school holidays, compelled to pursue the story of the Mutiny, its denizens and how they affected his hometown.

"Miami has ridiculous booms and ridiculous busts," he explains, pointing out the savings-and-loan crisis of the 1980s, the subprime bust in 2008 and intervening boom periods, both legal and illegal. "It's built on hot money. It's built on animal spirits: Get rich quick, sunshine, land grabs. If it wasn't cocaine, it was bootleg whiskey or various kinds of drugs, marijuana. And then you throw in sex and lawlessness and the mob. It was the winter playground for the mob. It's just endemic to Miami." 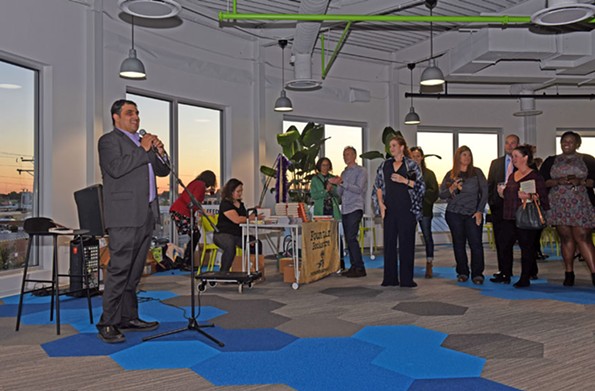 After graduating from Princeton, Farzad worked on Wall Street and then moved into journalism, writing for Bloomberg Businessweek about international finance and emerging markets. In 2013, Farzad moved to Richmond to be closer to family. He started the "Full Disclosure" podcast which, is carried by the NPR One app and features interviews with financial advisers, entrepreneurs, movie executives and even Bobby Black Tuna, the marijuana smuggler who spent more time in prison for that crime than anyone in U.S. history. He also appears on PBS Newshour and other news broadcasts.

"Full Disclosure" started with early financial support from the Martin Agency and was recorded in the agency's studio for a while. Today, Farzad records interviews at home or on the road, and some episodes are produced by Richmond's AudioImage Recording, owned by John Valentine, who says that Farzad is one of the quickest hosts he's worked with.

Matt Paxton, the Richmond-based hoarding expert and co-founder of Legacy Navigator, has appeared on "Full Disclosure," after meeting Farzad at the Weinstein Jewish Community Center. They also happened to share a literary agent in New York. Like many of Farzad's friends, he is amazed at how quickly Farzad has met and befriended Richmonders of all stripes and statuses.

"It took him a year to make his network here. He never really asks you for anything, he just tries to connect you with people," says Paxton, who met his business partner, Craig Shealy, through Farzad. "Probably half of the people I've met with, I know through Roben. He's not from Richmond, so he doesn't worry about West End, South Side, where you go to school. I've been here my entire life, and it's hard to make connections sometimes. He is literally a walking LinkedIn."

Spending time with Farzad is often educational, as he mentions a building in downtown Richmond that's a halfway house, and over there is a well-known drug corner, and oh yeah, I know someone you should meet. He asks a lot of questions, Paxton says. "I think that's why he's successful."

"He just calls me up occasionally and says, 'I have someone you have to meet,'" says Helayne Spivak, the executive director of Virginia Commonwealth University's Brandcenter, where Farzad wrote much of the book. "Richmond is a lot of past and a lot of future, and Roben's very much present. He sees how people can work together."

He's also passionate about Richmond, even if it was difficult starting his podcast here instead of in New York or Washington, where it would have been easier to draw guests from the financial and political worlds. But by meeting with people and having lots of introductory lunches over his first year, Farzad has found interesting and informed guests in Richmond.

"He's like the unofficial mayor," says Martin Agency director of content strategy and development Neil Patel, a friend who first noticed Farzad on PBS answering an "esoteric business question" with the city's skyline behind him. "He insisted on doing [the podcast] from Richmond. Big booster of Richmond, more than any other 'rank outsider.'"

Indeed, Farzad held his first book launch party in Scott's Addition in October, surrounded by family and friends, inviting everyone to have a mojito. His publisher encouraged him to have events in Miami and New York, and he's appearing in both places, but Richmond came first, he says.

As Farzad built his business journalism career in New York, he often pitched stories to cover in Miami, in part so he could get back to interviewing his book sources, some of whom were aging fast or not easy to find.

"On the surface of it, I have no business writing this book," he says. "I'm a finance writer, I've worked on Wall Street. But if you're given entree to this story, it's almost your responsibility to tease it out."

He also has never snorted coke. "I was so tempted to try it when I was reporting this book, just for journalistic — no really!" says Farzad, laughing at the inevitable question. "People ask, 'You want to try a bump?' I felt so guilty, I felt derelict. You're going to spend 20 years on this, and you're not going to try the thing you're writing about?"

While reporting the book, Farzad met men who once had bathed in hot tubs filled with Dom Pérignon champagne and partied alongside Rick James, the Eagles, Ted Kennedy and "Miami Vice" star Philip Michael Thomas, who moved his family into the Mutiny. Director Brian De Palma and Oliver Stone, screenwriter of 1983's "Scarface," checked in and tried to film the movie there. Although many of Farzad's sources claimed they were "the real Tony Montana," the drug lord played by Al Pacino is a composite character, he says.

Today, many of these highflying smugglers and dealers are elderly convicts, reliant on government assistance or dead.

Farzad made many cold calls to potential sources over the years, using current connections to create new ones. He met former drug kingpins, undercover cops and one of the very few female drug smugglers. They told him stories about a chimp with a diamond Rolex and how a "nice Jewish kid" sold dope after he didn't get into Harvard's law school.

Occasionally, Farzad would have to meet someone who would drive him in a second vehicle to a source, and in one case, an interviewee said he'd "hunt him down" if Farzad reported a sensitive family connection in the book. It was occasionally scary, but it also was "invigorating" to work on the material, he says.

At times, to confirm the stories, Farzad had to interview former law enforcement personnel and look at court files and reports. It would have been simpler to write a fictionalized account, he says, but he felt a responsibility to write the true story of Miami and the Mutiny, which is now a bland, corporate hotel that decidedly does not bank on the infamy of its address. He also felt a duty to be fair to his sources, no matter their crimes.

"A lot of these people have melded back into life," Farzad says. "Their kids are in college on scholarships, they're playing the trumpet in their church choirs. You don't want to ruin their lives. You are a trespasser." On one memorable day, he visited a former kingpin at his home, a man considered the "founding father" of freebase cocaine.

"He played a beautiful piano solo under this gorgeous painting of himself as a drug lord in 1978, as his mother and cat peeked out from another room," Farzad says. "You realize, gosh, you can't make this stuff up."

So far, multiple offers have come in for both scripted and unscripted (documentary) treatments and Farzad says he's trying to "get my head around how all that works."
As the author travels to more cities to publicize his book, he's not sure if he'll write a second one, although he hasn't closed the door yet. For him, interviewing people and taking part in conversations is the fulfilling part.

"I loved telling this story," he says. "I love talking to other people about it. I love interfacing with my characters and people from the past. Writing is so solitary. I like talking to people. When I have to hole up in places and deal with my doubt, it's so infuriating.

"This thing could have been a long 'This American Life' series, but I went the catholic route. You write a book, then you excerpt it and then you talk to TV and film people and do the other things. So, we'll see where it goes." S