Something special is happening at the Wilton House Museum, the gorgeous 18th-century mansion that was uprooted from its original James River plantation setting a ways downstream.

The mansion was rebuilt in 1935 in the West End off Cary Street Road. But don’t expect a Colonial Williamsburg-inspired wreath of fresh apples, or oranges lined up at the transom. Nor will a docent in a long gingham dress and white-ruffled cap greet you at the door. This isn’t your grandmother’s Wilton.

In what some might consider a startling departure for the architectural specimen that once housed the aristocratic Randolph family, the place has gone contemporary with its new exhibition, “Anywhere But Now.” This intriguing and, in some ways magical, showing of recently done paintings, sculptures, jewelry and craftworks speaks to the idea of nostalgia.

“Crossing the threshold of an historic house metaphorically represents a temporal disjunction for visitors who envision they are stepping into another time,” the curators write. “Rather, might patrons find such places fertile ground for thinking more deeply about nostalgic tendencies?”

So instead of isolating 21 evocative pieces in a designated space, many of the elegantly configured and furnished rooms themselves become not only galleries but also interactive containers, and in some instances, the inspiration of the artworks.

Consider Olivia Valentine’s “Displacement (Wilton House Construction).” In an upper bed chamber the artist has woven from dark linen threads a screen of sorts that runs from floor to ceiling. But the lightly rendered whisper of a piece doesn’t really screen anything. Instead, it serves to frame architectural elements of only one window in one closet in one corner of the exquisitely proportioned mansion.

The piece becomes more or less translucent with the changing light of day. The woven piece is anchored by a few carefully placed bricks, creating a sharp contrast between the natural materials of the building’s exterior and the softer and lighter material – linen thread — that might be the starting point for 18th-century clothing, bed linens or other textile accouterments.

Sonya Clark, an artist who often uses her own physicality (usually her hair) as a point of departure for making engaging pieces, is showing two pieces that couldn’t be more different in approach. “Counting Change II” is a videotaped abacus, or counting board, where the beads or balls (made of Clark’s hair) are moved by an invisible force.

Clark’s other entry, “Iterations,” is more familiar on first sight, but becomes monumental. On the old, raw flooring of a south-facing bedroom, she places hundreds of simple, black plastic pocket combs to create a sort of tree trunk, which is set against the wall. From there the “branches” extend and get even thicker, the piles of combs denser. It addresses the idea of ancestry and how genealogical research can be maddening: We know it’s a thicket, but finding the names is the rub. 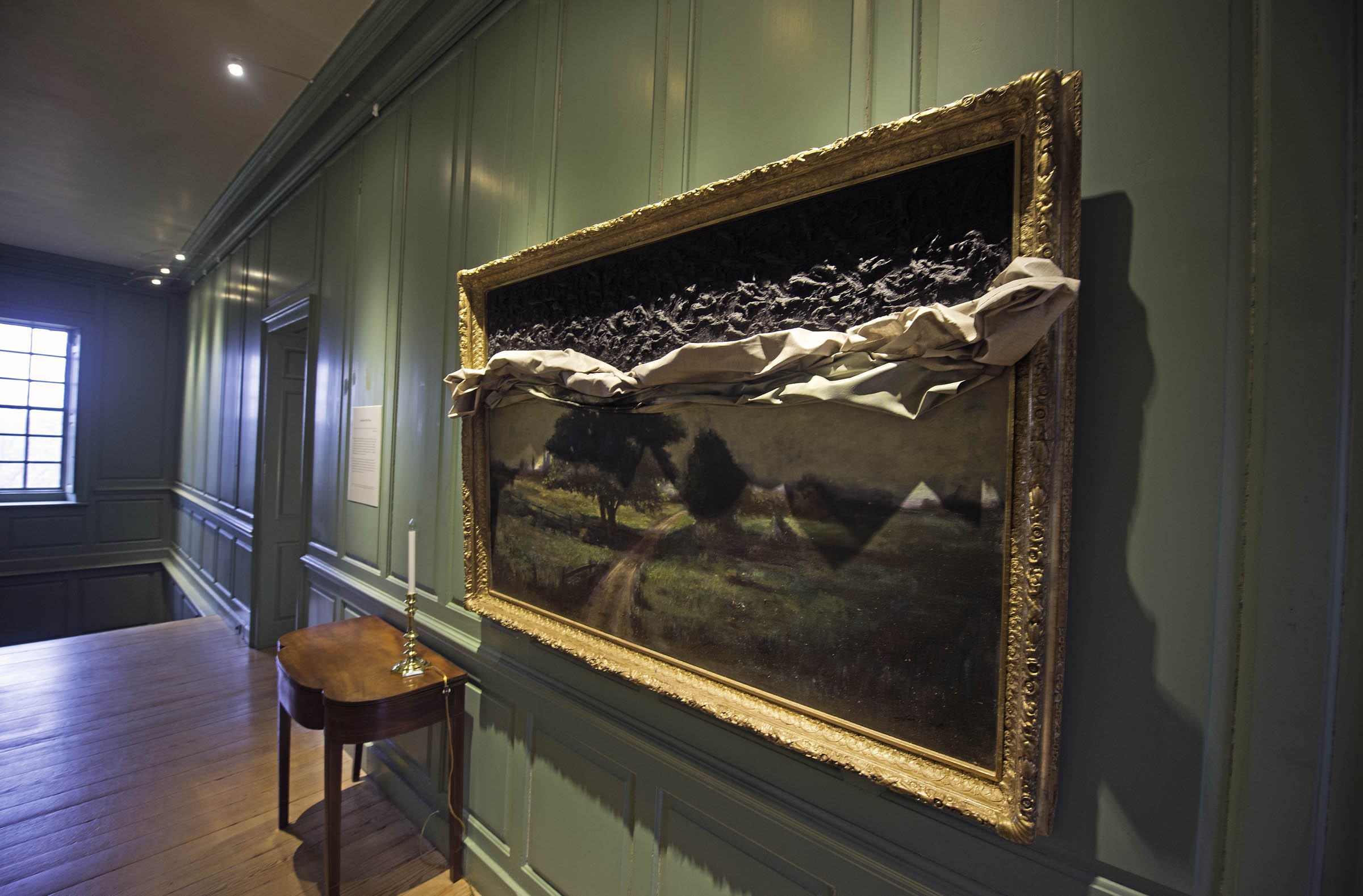 One of the exhibition’s most evocative pieces is Titus Kaphar’s “Memory Fails,” a large oil on canvas in a gold frame that hangs in Wilton’s upper hallway. It’s a pleasant, romantic landscape, John Constable-like — but something unsettling is happening. The canvas seems to be melting downward off its stretcher to reveal an under painting, or slathering, of tar. Message? Hand-in-hand with natural beauty is the sad reality that humans can spoil or change things. Indeed, wasn’t Wilton, itself saved from certain destruction by creeping industrialization, straightening the channels of the James River and factory construction?

If “Memory Fails” is in your face, there are more subtle pieces to contemplate. Two works of what might be called jewelry — or at least what once was jewelry — must be viewed at close range. “Shifting Hierarchy Royal Blue Broach” and “Shifting Hierarchy Necklace,” both by Curtis Arima for Radical Jewelry Makeover, have recycled materials and created stunningly hypnotic and highly personal works.

“Anywhere But Now” was curated by Susan Moser and Angela Parker, both graduate students in the department of art history at Virginia Commonwealth University. Most of the works they selected are by artists with VCU connections. Thus it’s exciting that the in-town campus and one of the city’s suburban cultural gems are collaborating to explore fresh ground and provide challenging new ways of experiencing contemporary art. And for the traditionalists out there? Not to worry: The 18th and 21st centuries co-exist quite nicely here. In fact, some might consider this exhibition “Wilton Refreshed.” S

“Anywhere But Now” is on exhibit through Jan. 15 at Wilton House Museum, 215 S. Wilton Road.