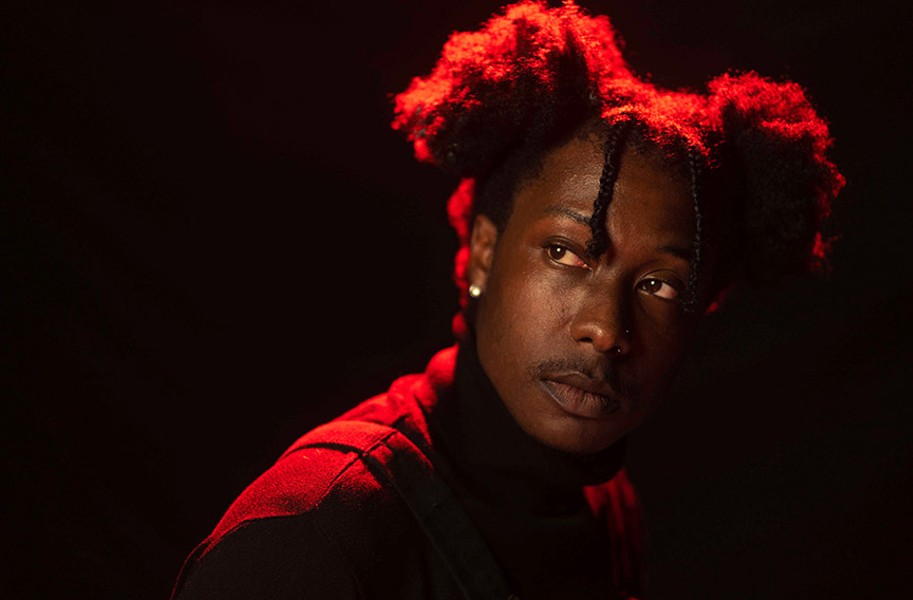 Musicians often save the most meaningful moments for last when putting on a concert. The same isn’t necessarily true of the recording process, but the final session for Richmond hip-hop artist McKinley Dixon’s new album, "For My Mama and Anyone Who Look Like Her,” was quite the exception.

“It was surreal being like ‘Everything that I’ve created has led me to lead this string arrangement,’” the rapper recalls.

Dixon’s visit to Spacebomb Studios in November is proof that at especially meaningful turning points, beginnings and endings are nearly indistinguishable. At the same time he was kicking off his partnership with the Richmond label by adding strings to his song “make a poet Black,” he was closing the book on a three-album arc that’s stunning in scope and execution – one that brings the past, present and future into a single conversation about how harm can be acknowledged and addressed.

“I’m always trying to think of how you can maneuver forward based on the past,” he says.

Dixon’s latest release completes a trilogy that began with 2016’s “Who Taught You to Hate Yourself?” and continued in 2018 with “The Importance of Self Belief.” Together, they comprise a narrative universe in which grief, mortality, family and community fuel vivid storytelling and rigorous introspection. Dixon’s vision for the project started forming in 2013, the year he moved to Richmond from Annapolis, Maryland, where he grew up.

Though he relocated to study in Virginia Commonwealth University’s kinetic imaging program, Dixon began connecting with local musicians about building outward from the EPs he’d been releasing, telling them: “Hey, I have this series of concept albums that I’m trying to create, and I think that with time it would be really cool if we all made this.”

That sense of inclusion is a defining characteristic of his trilogy. More than 30 musicians contributed to “The Importance of Self Belief” alone, and parts of the new album were recorded from as near as Dixon’s bedroom and as far away as Japan.

Richmond-based singer Ali Thibodeau added vocals to Dixon’s last two full-length albums, typically working remotely at a pace she sets herself. “He is one of the most trusting artists ever,” she says. “His greatest strength, I think, among his many strengths, is collaboration, because he lets the artist feel so free to do whatever they want.”

Saxophonist Nathanael Clark was one of Dixon’s earliest musical connections in Richmond. He appeared on all three albums. He noted how Dixon’s welcoming style inspires musicians to push themselves: “He's usually pretty open ended with any instruction he gives me while recording, almost dauntingly so, which allowed me to take some liberties and experiment, creatively, with what I was laying down for him.”

That inclusiveness extends to Dixon’s expansive approach to genre and incorporation of jazz, which sometimes draws comparisons to Kendrick Lamar’s “To Pimp a Butterfly” album. While Dixon acknowledges the parallel between Lamar’s embrace of vulnerability and his own, he believes that saxophonist Kamasi Washington, who collaborated with Lamar on “To Pimp a Butterfly,” has made a greater sonic impact.

“A lot of my arrangement [influence] comes from Kamasi Washington’s ‘The Epic,’” Dixon notes, citing another visionary album that unfolds in three parts. Dixon has continued to pursue a career in animation and he named one of his characters “Kamasi” in Washington’s honor. Dixon has long been passionate about drawing, even when he wasn’t as focused on hip-hop.

“I didn’t really think too much about music growing up,” he says. “I don’t really know what I was thinking about. Maybe drawing? But I wasn’t focused too much on music. And then in school I got really attached to [rock band] the Used and things like that, so it kind of skewed. I came back to rap a little bit later in life, probably around high school.”

Dixon grew up Catholic, transferring from a Catholic school to a nonreligious one during the course of his elementary education. It was an eye-opening transition.

“It had a lot of different effects on how I viewed, obviously, anti-Blackness and religious institutions and schools,” he recalls.

Though he shared an EP titled “The House That Got Knocked Down” early in 2020, Dixon let listeners know via social media that he’d be spending some time away from releasing music to grow, learn and work toward a deeper understanding of his position in relation to cycles of harm.

“That’s the only thing that’s really going to save you, is questioning your own intentions and seeing where you come from in situations,” he explains. “And where others come from.”

Looking inward meant linking yesterday and today – charting a path forward by identifying patterns rooted in the past and tapping into the healing power of storytelling. This narrative time travel has helped him process trauma ranging from the collective to the personal, from police brutality to the 2018 killing of his best friend, whom he addresses on the new song “Bless the Child.”

“Rap already does that so casually, but it hasn’t been really named,” he says. “It became something that I really started thinking about within this last year. ... Now I have the language for it. I feel like language accessibility allows for quick time travel.”

The pace of production on “For My Mama and Anyone Who Look Like Her” meant that Dixon could span time musically as well, allowing songs to accrue new meaning. The album’s second track, “Never Will Know,” is a moving example.

“Micah James’ and Gold Midas’ verses were from a song I actually had three years prior to putting this instrumental together,” he says. Dixon ended up rewriting his own verse as part of the new arrangement, in which a shifting beat punctuates three distinct viewpoints on being denied access, forming a candid exchange on religion.

“Midas’ was the perspective of not having the funds,” Dixon says, “and Micah’s verse very eloquently was about being gay and not being allowed into heaven. It was this beautiful thing, and that’s where we put the switch, but I wouldn’t have known to do that switch if I hadn’t saved those a cappellas from 2016.”

News of Dixon’s Spacebomb signing broke in December of last year, but a short video he posted to social media from the November strings session provided an exciting preview. The official video for “make a poet Black” was released the following February, with clips of Dixon rapping and pacing within a spotlight’s glare, juxtaposed with footage of dream-like searching. A child appears but quickly runs off. It’s a stirring set of images, especially in light of the self-examination Dixon has undergone.

The song’s chorus refers to concealed pain and the need for healing, and its final refrain follows a striking instrumental passage lasting more than a minute. The string arrangement that lends contemporary classical shading to that spacious section came courtesy of composer and Spacebomb house band member Trey Pollard. It’s the sole piece of “For My Mama and Anyone Who Look Like Her” to have been recorded at Spacebomb Studios, but if those early returns are any indication, the sky’s the limit for what Dixon and Spacebomb could make together.

“The whole album was really done,” Dixon says. “I created everything without them and having that moment be the ending for it, while I started partnering up with them made me realize anything is possible. If I want to try something, I can manifest it if I really, really try.”