Time to Get Alone

The Virginia Center for the Creative Arts celebrates 40 years of artistic incubation. 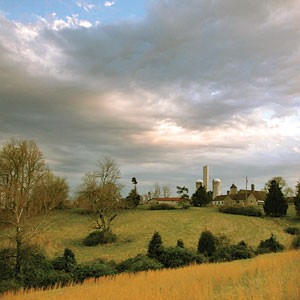 Henry David Thoreau wrote, “I never found the companion that was so companionable as solitude.”

He ought to know, having lived for 26 months, Unabomber-like, in a waterfront shack in the woods, mooching off his buddy Emerson. Yet, given that his me time also resulted in the production of “Walden,” one of the great works of American literature, perhaps he was onto something.

While most artists these days don't have the luxury of isolating themselves for two years to craft their masterpieces like Thoreau, fortunately the Virginia Center for the Creative Arts offers time and space apart for artists to create, away from the myriad distractions and responsibilities of their daily lives.

Celebrating its 40th anniversary, the center, often known by the acronym VCCA, kicks off a yearlong series of festivities on Jan. 8 with a dinner, dance and fundraising art auction at the Virginia Museum of Fine Arts honoring lauded Virginia photographer Sally Mann, a member of its advisory council. It will also mark the beginning of a major fund-raising effort for VCCA, which hopes to establish a $6 million endowment. U.S. Sen. Mark Warner and his wife, Lisa Collis, serve as co-chairs of the anniversary event series.

“For 40 years, VCCA has awarded fellowships to more than 4,000 of this century's most exceptional writers, composers and visual artists. VCCA is a national treasure,” Warner says. “VCCA has served as an incubator for some truly great art.”

Each year, the nonprofit center plays host to more than 350 artists from around the world at its pastoral artists' community in Amherst County, and its satellite facility in France for as long as two months, allowing them to dedicate themselves to creating their work in peace, in the company of other passionate, talented artisans.

Selected by merit-based peer-review panels and representing the full scope of the arts, including poets, novelists, sculptors, painters, printmakers, composers and musicians, the center's fellows have won Pulitzer Prizes, Grammys, and Guggenheim and Fulbright fellowships. They've been nominated for Academy Awards and selected for the Oprah Book Club.

“When there's madness all over the world, you can go to VCCA and turn down the volume quite a bit,” says National Book Award winner Alice McDermott, who began and finished her novel “Charming Billy” at the center. “I teach, and I see with young writers how difficult it is for them to get away to silence and to not simply write in quick reaction to life as bloggers do and with IM-ing and tweeting, but to take the time through their art to understand the deeper meaning of the things that happen to us.”

“When you get in, it really feels like an affirmation of your career,” Anderson says, speaking to the center's high standards for admission. During her two-week stay in 2006, “I just accomplished so much,” she says. “I worked 13 to 14 hours a day. It's just this total devotion and time spent with your work.” Plus, “it's a great place to meet other artists.”

“To me,” Softic says, “VCCA is the sacred ground where I feel my best work has happened there, that my best thoughts have taken place there. It's in a beautiful country setting — there are woods to hike through, there's a lake in summer you can swim in. It's all very simple. There is no luxury involved other than the luxury of being around 25 like-minded people — and we're allowed to be ourselves, to be artists. I feel VCCA has facilitated some of my very best work.”

For those who aren't artists and may not immediately grasp the importance of the center, McDermott reminds that artists help make sense of life and the events of our times, whether the vehicle of their expression is a book, film, painting or song.

For information on the Virginia Center for the Creative Arts, go to http://www.vcca.com.