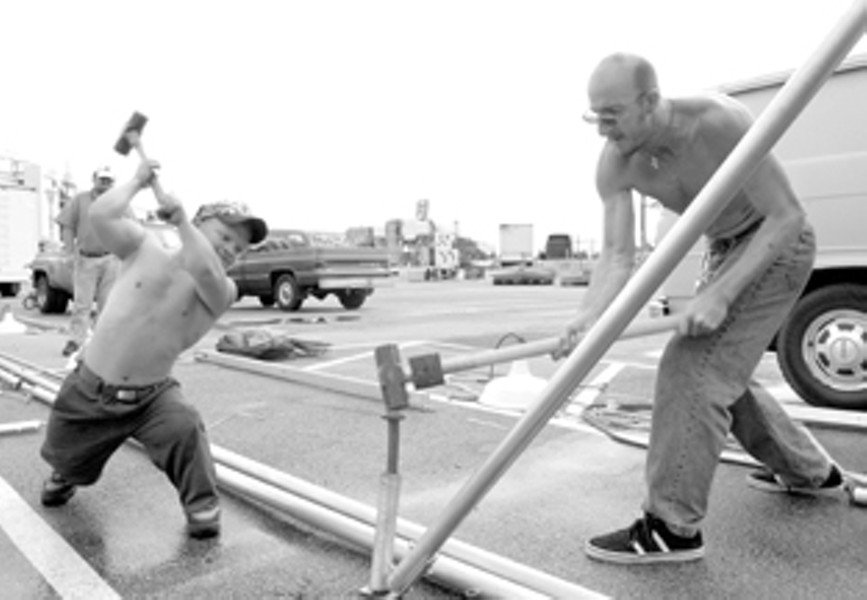 The girl’s locked in a cage, and while you’re watching her, her hair grows and her body swells and next thing you know, you’re staring at a gorilla. The gorilla’s in a trance and we wake him from the trance. After that, anything can happen.

We just came [from the state fair in] Greensboro, North Carolina. We got in last night and there was no electricity so we’re all scummy and dirty from not being able to shower. [Turns to instruct the crew hanging the wooden gorilla head: ‘That needs to kick over about a foot.’] When we’re up and operating it takes six of us to work the show.

We used to bring in the big ten-in-one sideshow — where you have 10 acts in one show — with the fire-eater and the sword-swallower. But we haven’t had that out in the last few years — since 2000.

Years and years ago, there were a hundred ten-and-ones in America. Now there’s only two or three left in the country. We were one. Then a couple years ago I had a kidney transplant. So I don’t bring as much out now.

Nowadays this is all brand new stuff to the kids. A lot of this stuff is so old it’s new again. People are into this type of thing because of shows like “Fear Factor” — the bizarre, the unusual, the 30-seconds-to-fame. And your cheaper tabloids are the sideshows of today. You know the headlines: “Baby found in barn. Monkey on the head of a rooster found here.” People just like the bizarre. People like to see other people do outlandish things that they wouldn’t do. That’s why the sideshows got popular. Folks could see a man lying on a bed of nails, eating fire, wrestling a snake.

But some of the old sideshow acts are obsolete. We used to have the Iron-Tongued Girl who’d stick a hook through her tongue and lift weights. Now half the kids in the audience have their tongues pierced. And you used to have the Tattooed Man who was just covered in tattoos. Now everybody in the audience has more tattoos than the old ’too man. So attractions like that are no good anymore with the way things are today.— As told to Brandon Walters