The conspicuous consumption of an earlier era lives at Maymont. 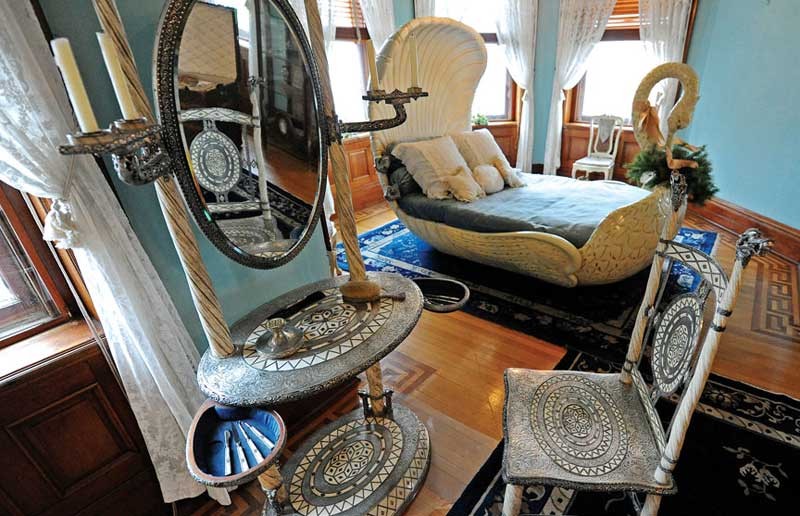 Before any income tax, before any investment regulations — and before any retailers of luxury goods began marketing to the masses, millionaire homeowners James and Sallie Dooley of Maymont mansion were purchasing one-of-a-kind items made by Tiffany and Co., such as the narwhal-whale tusk and silver dressing table and chair.

With the opening of a Tiffany's store in Richmond's Stony Point Fashion Park in September, a company archivist and new store manager visited Maymont as other Tiffany representatives did. Like other visitors, officials of this company, which dates its beginning to Charles Lewis Tiffany's founding in 1837, were there to view the viking revival dressing table and chair in the Dooleys' second-floor room, a place often referred to as the swan room because of the bed designed to resemble a swan.

The mansion stands as an unusually complete document of the taste and lifestyle of the wealthy in the mainstream of the Gilded Age — the type of clientele to which Tiffany catered. With a core collection of 1,000 furnishings and art acquired by the Dooleys for the house on their 100-acre estate, Maymont is the most complete, intact historic site of the period when Tiffany's was the most prestigious source in the country for a full range of luxury items for millionaires.

Maymont's collection joins other notable offerings from the company found in River City, such as Lewis Comfort Tiffany's art on display at the Virginia Museum of Fine Arts, and a Tiffany sword captured from a Union soldier at the Museum of the Confederacy. "Tiffany made nothing for the Confederacy," museum senior curator Robert Holland says. "It was illegal for the Union to trade with the enemy."

Characteristic of the conspicuous consumption of Gilded Age taste, Maymont's examples represent the ultimate expression of Tiffany & Co.'s viking revival style, inspired by the excavation of viking ships in Norway in the 1880s through the early 20th century.

An accessories set, also made by Tiffany, complements the vanity table and chair in the bedroom, though it wasn't discovered until 2008. On a recent tour Dale Cyrus Wheary, director of historical collections and programs for the Maymont Foundation, pointed to some of the 22 pieces of the Tiffany silver-and-ivory set found in a long-sealed drawer: hairbrush, tweezers, large nail file, buttonhook, cuticle pusher, comb, brush, nail buffer, nail scissors, small nail file, cuticle knife and perfume bottle. The cache had remained hidden under the staff's noses.

"As we progressed with implementation of our long-term conservation plan," Wheary recalls, "many locked drawers and cabinets were opened. Although we always hoped to find long-hidden treasures or a cache of Dooley papers, nothing came to light as we conserved the collection piece by piece over the years."

One day, a locksmith was called in to do some work and made the discovery. Wheary was in her third-floor office. "I heard screams of joy coming from downstairs," she says. "As I walked into the room, collections manager Kathy Garrett-Cox and conservation tech Evelyn Zek were unwrapping the treasure trove."

Wheary wrote in a 2008 article for the Magazine Antiques that Tiffany had established the date of the dresser and chair because the set was made for the St. Louis Exposition in 1904. The ensemble's unique design is indicative of the heated competition among designers vying for awards at international expositions at the turn of the century — when Tiffany's Paulding Farnham was the creative genius at the company. Wheary also noted that newspapers used as padding between the mirror and its backing date from 1903 and 1904.

The rare Tiffany items at Maymont include a three-handled silver presentation cup, a fan box and three French clocks sold by the company. These clocks reveal Tiffany's early practice of retailing, under its own brand, items made by others — such as the clock made by the famous French clock maker, Japy Freres and Cie, dating to around 1875.

Whether Maymont's one-of-a-kind items were made by Tiffany or simply marketed by the company under its name, the pieces on display at Maymont stand out individually and as part of a rare collection. Conspicuous consumption lives on, and not just at Stony Point. S

The Maymont Mansion at 2201 Shields Lake Drive is open Tuesday-Sunday, noon-5 p.m. while the grounds, wildlife exhibit and gardens are open 10-5 p.m. daily. For information visit Maymont.org or call 358-7166.