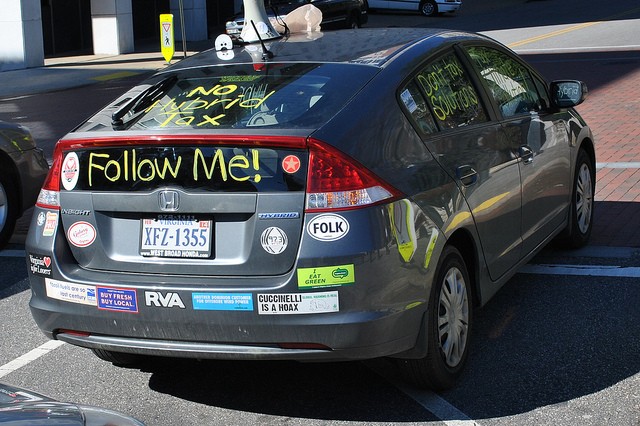 It was derided as regressive, stupid and ignorant. But whatever, on Saturday Gov. Bob McDonnell’s transportation plan passed the General Assembly with bipartisan support. Time to move on?

Maybe not. Two Northern Virginia lawmakers are asking McDonnell to use his line-item veto power to eliminate a portion of the bill that earlier in the session inspired a parade of Priuses to circle the Capitol in protest.

As intimidating a sight as that must have been, the version of McDonnell’s transportation plan that passed ultimately included a $100 annual fee to be assessed on drivers of alternative fuel vehicles.

NoHybridTax.com aims to change that. The petition has gathered 2,350 signatures as of Tuesday morning.

The lawmakers behind the petition, Delegate Scott A. Surovell, D-Mount Vernon, and state Sen. Adam P. Ebbin, D-Alexandria, tell The Washington Post “the legislature’s decision to boost the cost of driving a hybrid runs counter to the policies of several other states that offer incentives for the vehicles because they promise to create less pollution and reduce U.S. dependence on foreign oil.”

“It’s mind-boggling,” said Surovell, who drives a 2004 Honda Civic hybrid. “To me, it’s incredibly punitive for people making a decision that’s better for our country and better for our environment.”

In January, George Hoffer, a transportation economist at the University of Richmond, offered a similar assessment in an interview with Style.

"It is just perverse," Hoffer says of forcing owners of combination electric- and gas-fueled cars to pay an extra $100. Such hybrids are lighter and create less wear and tear on roads, Hoffer says, and their owners will pay the sales tax anyhow.

"That's just stupid," Hoffer says. "If anything, they should be paying less."

Virginia's proposes tax on hybrids is ignorant and unfairhuffingtonpost.com/mobileweb/2013…

I’ve emailed McDonnell’s press office asking for comment, but considering it was his idea to begin with, it may be a stretch to think he’d ax the $100 fee at this point.

A McDonnell spokesman referred me to the governor's remarks to reporters on Saturday. McDonnell said then that he'll look at it to make sure hybrids are treated fairly. But he says the the alternative vehicle fee is "just a matter of fundamental equity" because hybrids use less gas and thus pay less in gas taxes. "I don't want for a minute anyone to think it's punitive to hybrids," he says.

That, however, ignores the fact that McDonnell's original plan included the fee but eliminated the gas tax entirely. The plan as passed represents about a 35-percent cut to the gas tax, money that is replaced by a .3-percent increase in the state sales tax.