Thrift Happy: An expert antique shopper on how she collected her happy home 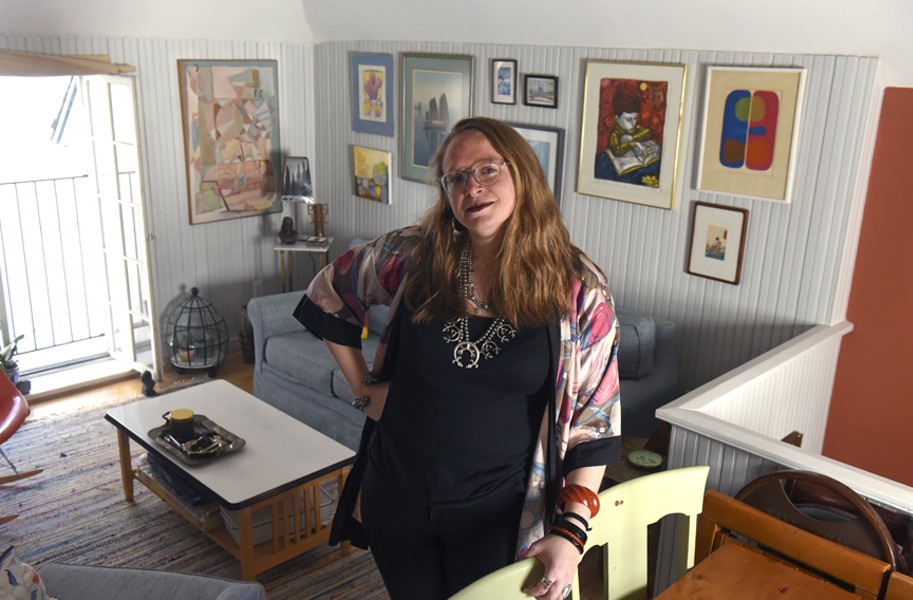 Scott Elmquist Kat Driggs has a degree in art history and a knack for collecting and combining secondhand treasures, which she meticulously displays in her one-bedroom home in the arts district. 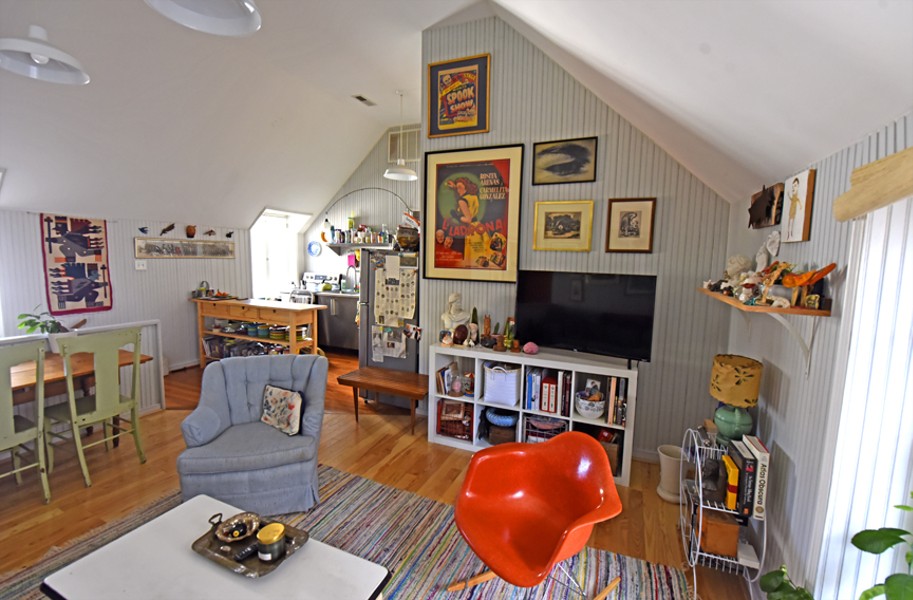 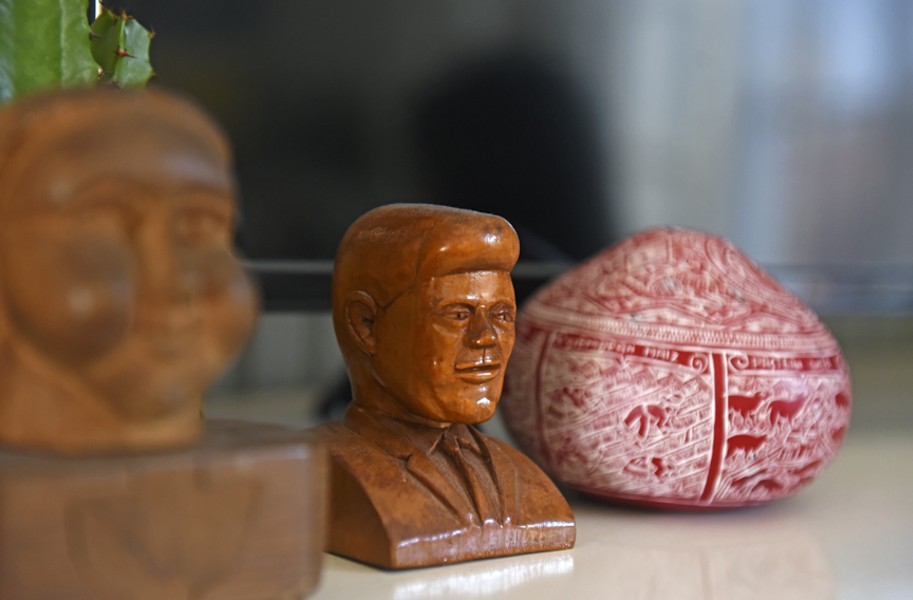 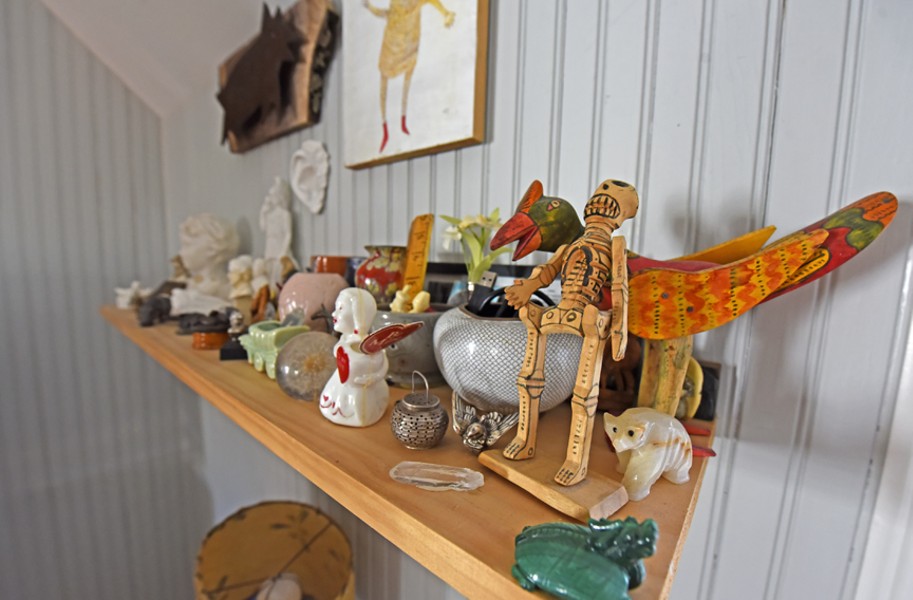 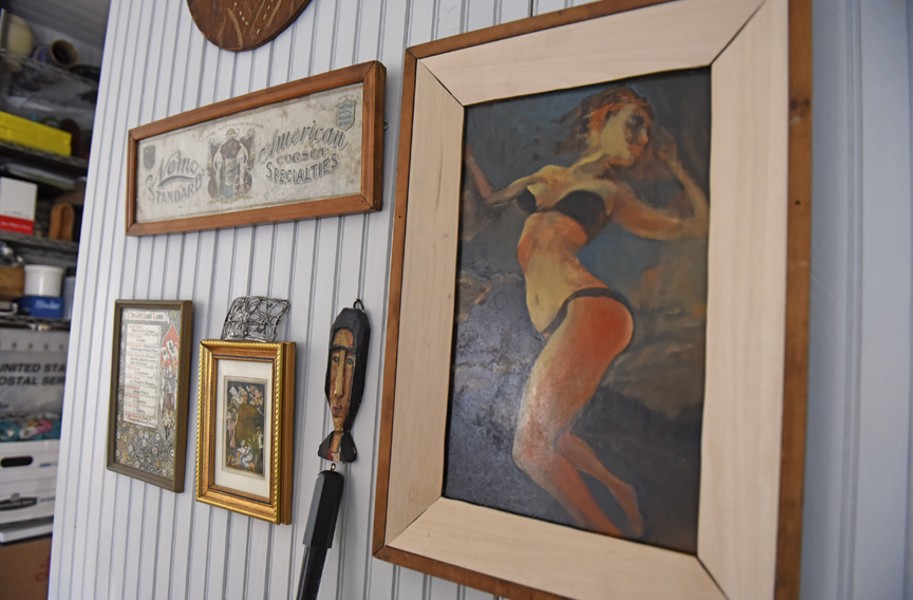 Kat Driggs finds herself in a thrift store at least once a week. She has a storage unit for overflow art and antiques, and practically every nook and cranny of her modest one-bedroom displays a collection of items that she has lovingly curated over the years.

The wall above the staircase, the bookcase by the window, the shelf space next to the TV — no surface in the apartment is unadorned, undecorated. And yet it doesn't feel cluttered. Driggs has a little bit of everything — a Girl Scout poster from the 1920s, a plaster cast of Arthur Ashe's ear, a Herman Miller fiberglass rocker — and somehow, she makes it work.

"I collect some weird stuff," says Driggs, giving a nod to an array of salt sculptures and Davy Crockett-inspired jelly jars, which she uses as wine glasses.

Driggs graduated from the Tyler School of Art at Temple University in 2013 with a bachelor's degree in art history. She's always had an eye and appreciation for pieces with compelling back stories, but it wasn't until after college that she became addicted to using that knowledge to decorate her own space. She stayed in Philadelphia after college, and while working at a cheese shop in Reading Terminal Market, began frequenting Philly AIDS Thrift, a nonprofit secondhand store that still holds a special place in her heart.

When she stumbled upon a 17th century Delft tile for a whopping 45 cents, she couldn't believe the museum-worthy pieces that were making their way into the store. At that point it occurred to her that she could help the charity, and she began volunteering to sort jewelry and assist with setting art prices.

"I got so hooked on the idea that you could actually own the objects you were seeing in your textbooks," she says.

And the rest is (art) history. Since her days as a volunteer in Philly, Driggs has adoringly and painstakingly built a collection of dozens of pieces. She rarely spends more than $20 on an item. And the monetary value is, for her, inconsequential.

"I think so much of what's significant about the objects we surround ourselves with is not just what it looks like but also the story," Driggs says.

The small John F. Kennedy bust in her living room, for example, is a piece of prison folk art, and the wooden bust next to it was made in Pennsylvania using a classic Germanic folk carving technique. Driggs gleans as much information about a piece as she can while she's at the register — she highly recommends chatting with flea market vendors to get those stories — and the rest she does on her own through extensive online research.
Leaving her beloved store in Philadelphia wasn't easy, but the results of the 2016 election left her feeling like she needed to do something that put her talents to good use. So she went looking for a job that would make her feel like she was making a meaningful contribution.

"I knew I wasn't going to fix everything, but I wanted to do something. I was like, what does my knowledge and skill set actually make me capable of doing?" Driggs says. "How can I use my art history degree in a way that's actually helping?"
Last April, Driggs packed up her art collection and her tiny, slightly neurotic orange tabby named Mr. Poops and moved to Richmond for a job at Preservation Virginia, a local nonprofit dedicated to strengthening the state's historic places.

Now that she's here, Driggs has made a home for herself in the arts district. She marvels at how much more space she has for her collections now that she's no longer confined to a Philadelphia studio. She shamelessly visits local flea markets, Azalea and Bellwood, to name a couple, at least once a month.

Everything in her cozy apartment has a home, but she's in no way married to placement. Well, only so many wall spaces lend themselves to a 3-foot movie poster from the '50s, so she recommends first placing large items where there's appropriate space and then filling in the gaps. But aside from that, she's always open to playing musical chairs with her finds.

"I move stuff around constantly," she says. "I think it's a pain in the ass to take art off the walls, but I'm not hugely committed to anything's location. If someone came in and said 'That would look so great right there' and I agreed, I'd do it in a heartbeat."

Bringing home a new piece often requires at least minimal rearranging, which Driggs says should never be a deterrent when deciding whether to purchase something. Can't picture exactly where it'll live while you're standing in line to pay? Don't worry about it, she says — if it matters to you, you'll figure out a way to make it work.

"Things remind me of each other," she says, noting that most of her belongings are grouped by some common thread, be it material, style or theme. "Look at your pile of stuff that you're trying to figure out what to do with, and figure out what themes are going through it."

Driggs uses her art history degree to scour the internet for clues about where a painting, sculpture, or piece of jewelry originated. Digging for that story is part of the thrill for her, and she proudly shares those stories with anyone who inquires. But for those who just want to decorate a room sans the history lesson, Driggs has advice:

"I think it's just going into flea markets and limiting yourself financially, because if you just go for it, you can go broke really fast. You have to restrain yourself on some level at thrift stores and flea markets, but that's like a joke in this apartment I guess," she says. "I think it's just choosing what looks interesting to you, because that's the most important thing, if it makes you happy. Everything in this apartment stays because it makes me happy. If it doesn't make me happy it gets sold or put in storage or not bought at all."

As for other thrifting and decorating tips? She advises vintage shoppers to keep an eye out for details that let them know a product isn't mass-produced, like the somewhat crinkled border of a print.

"You see the bite marks around the edge where a plate was pressed in? That means that it's a real print, that means it wasn't some mass-produced image," she says.

Similarly with pottery, she says, always look at the bottom.

Especially now that she's in Richmond, with flea markets so consistently appealing that she says she doesn't have to leave town, it's only a matter of time before Driggs runs out of space for it all. She also loves helping other people get their hands on beautiful pieces with fascinating stories, so she recently launched Palmyra Vintage, an online shop featuring "Kat's vintage jewelry and knick-knacks."