Woody Allen continues to please fans by pleasing himself. 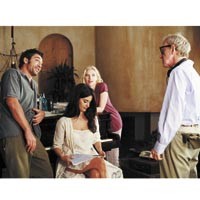 Woody Allen has distinguished himself in recent years as one of the few reliable sources of grown-up stories to be found at the movies anymore. He may not care to rekindle the artistic sophistication he achieved in the '70s, '80s and '90s, but if all else fails, his yearly contribution is there.

Even his strangest recent fare, like the comic mystery "Scoop" from two years ago, or last year's un-Allen and therefore underappreciated psychological thriller, "Cassandra's Dream," have more depth and human interest than most of the flip popcorn movies and turgid melodramas that flood theaters every season. We may have to give up hopes for another reflective masterpiece like "Manhattan," or an autobiographical wonder like "Deconstructing Harry," but Allen remains a reason for the people who feel themselves ignored by Hollywood to bother going to the movies.

In a pleasing turn of events, "Vicky Cristina Barcelona" is the closest Allen has come in almost two decades to revisiting the romantic entanglements that were the staple of his best early work. A frothy comic drama set in sunny Spain, the movie follows the misadventures of American tourists Vicky (Rebecca Hall) and Cristina (Scarlett Johansson) during an extended stay in Barcelona. The two are not long abroad when they have a salacious run-in with Juan Antonio (Javier Bardem), a famous Spanish artist who abruptly proposes that the three take an excursion together for a weekend of sight-seeing, wine and sleeping together. In typical Allen style, the women make a show of shock and protest only to end up in Juan's airplane on the way to their destination after all.

"Vicky Cristina Barcelona" plays like one of the short stories Allen still writes for publications like the New Yorker, even bearing an amusingly omniscient narrator who fills us in on the backgrounds and inner perceptions of the protagonists as they have their escapade. Cristina, the more open of the two, easily agrees to go to bed with Juan Antonio, but food poisoning thwarts their affair, and Juan must try harder with Vicky, who consistently proclaims her propriety only to falter for red wine, steely looks and some moonlit Spanish guitar. Victims of the fickle nature of romance, no sooner have the three returned from their trip than does Juan begin dating Cristina, leaving the now highly confused Vicky in the lurch to contemplate the arrival of her fiancAc, Doug (Chris Messina).

And yet all is not happy for Cristina, either, who settles into romantic bliss at Juan's home only to witness the return of his ex-wife, Maria Elena (PenAclope Cruz). Allen is not interested in developing a theme in this story so much as exploring each character's often comic responses to the whims of passion. There are other dangerous liaisons taking place around the main characters', and Allen uses these as a chance to poke fun at a variety of personality types. He is an equal opportunity satirist this time out, often pitting his characters' opposing quirks against each other even if they themselves are too narcissistic to catch on.

Like most of Allen's work, "Vicky Cristina Barcelona" has little in the way of a visual style, and as usual this is compensated for by the gift he exhibits with actors, both in casting and direction. It may not be a stroke of genius to make Bardem a lustful Spaniard, or Johansson a busty bimbo, but when the talent is big sometimes casting for type is the bolder move, and at any rate Allen knows how to work the materials to his advantage.

"Vicky Cristina Barcelona" is a fun movie with many interesting characters that get into hilarious predicaments, and Allen seems satisfied with leaving it at that. It's surprising to find such a gifted, experienced artist dedicating himself to mere playfulness; one might expect a filmmaker of Allen's stature, after so many years, to be looking for that last immense, career-defining work. And yet as a recent profile revealed, he's much less interested in pleasing critics or fans as he is in pleasing himself, enjoying the creation process and then moving on. Perhaps we should be thankful. Let's hope Allen has a few more decades left in him, but the day he stops creating could be the day we lose more than another great filmmaker. It could mean something more personal: the loss of at least one guaranteed mature entertainment at the movies every year. (PG-13) HHHHH S