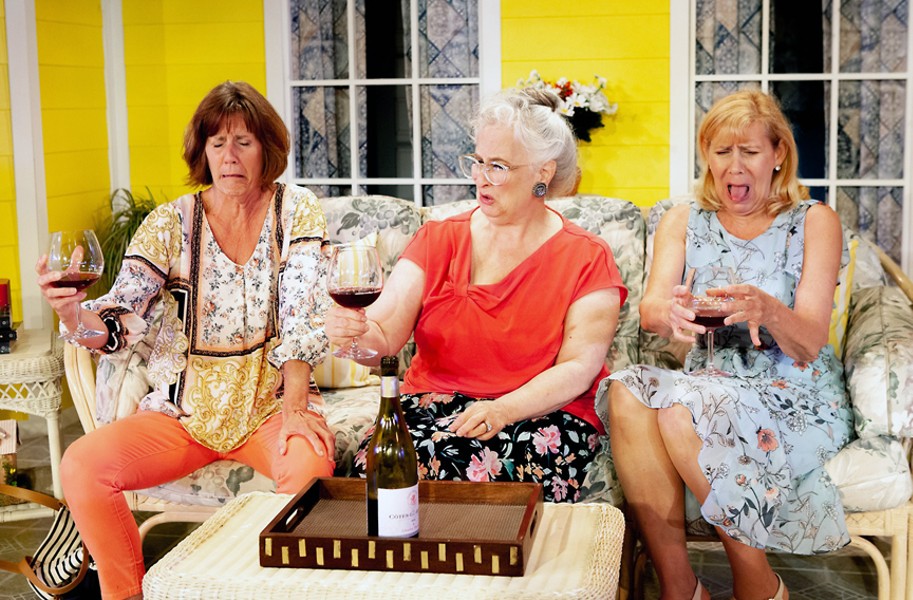 Writing trio Jessie Jones, Nicholas Hope and Jamie Wooten are best known for fast-paced Southern situation comedies like "The Dixie Swim Club" and "Doublewide, Texas." We last saw them in Richmond with "A Doublewide, Texas Christmas" at CatTheatre, and at Swift Creek Mill last spring with "Always a Bridesmaid."

This summer, Swift Creek Mill brings us back to the deep, hot South with "The Savannah Sipping Society," another zany Jones, Hope and Wooten comedy.

Like last year's "Always a Bridesmaid," this show has a rigid structure: Two acts, four scenes each, delineated by monologues, and the plot hinges on a friendship pact made between four middle-aged women trying to navigate life's unexpected twists and turns.

Three women bond over their misfortunes after a hot yoga class. Randa (Joy Williams) has lost her job, the husband of Dot (Jacqueline Jones) has died, leaving her alone in her retirement, and the husband of Marlafaye (Robin Arthur) has run off with a 23-year-old and he wants to keep the house in the divorce. When they meet for drinks later in the week, they are joined by Jinx (Jennifer Frank), a beautician and life coach. She agrees to work with all three of them to change their lives for the better. If in six months they don't feel like they've made any progress, they won't pay her a dime. All three women agree, and each sets off on a journey to live their best lives. In the process, their friendship deepens.

This show is sweet, cute and mildly funny. Tom Width's direction is spot-on for this kind of material. The physical comedy is fun and fast-paced and all of the actresses are all great in their roles. I especially enjoy Anne Carr Regan's short appearance as Randa's evil grandmother, Cordelia Covington. Width's set is excellent, with bright yellows and blues, palm trees and wicker porch furniture. I like that we get to see inside the house through the windows and doors, allowing for added layers of visual humor onstage. Joe Doran's lighting bounces beautifully off the backdrop, creating daytime, nighttime and twilight skies. Maura Lynch Cravey's costumes suit the characters well.

This production is really well executed, but I don't like the script. Jones, Hope and Wooten seem to be going for a cross between "Golden Girls" and "Steel Magnolias" but these characters and stories lack depth, and the script relies on one-liners and slapstick comedy in a way that makes it hard to connect to the sentimentality.

I do like the way the monologues are used to let the audience in on the women's private thoughts and to provide bridges linking scenes and indicating the passage of time. I certainly appreciate the play's overall message about female friendships and the ways in which women support each other. But I am not a Jones, Hope and Wooten fan, and this show just made me wish I could see what Width, and this cast and crew, could do with a similar show of more substance. These actresses would all be excellent in "Steel Magnolias."