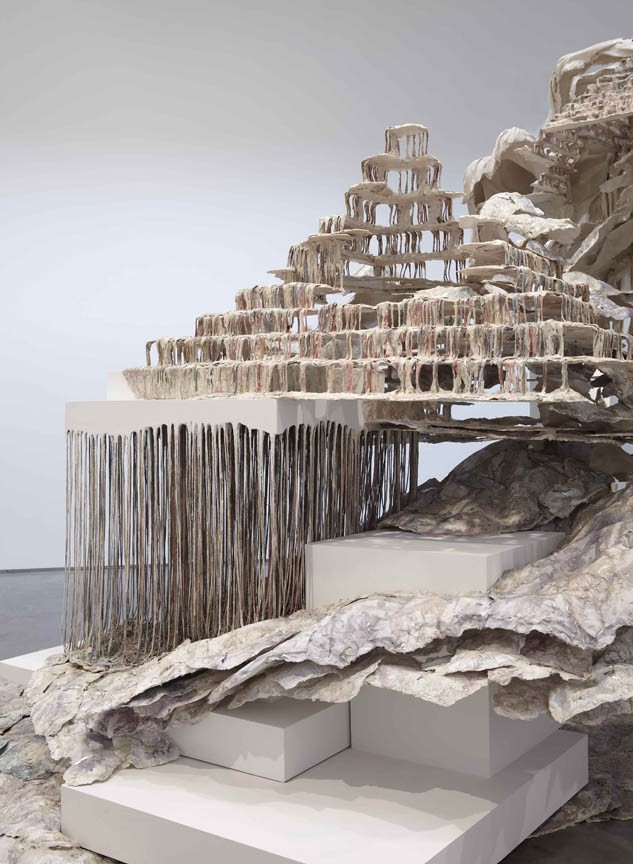 At first glance Diana Al-Hadid's sculpture, "Trace of a Fictional Third," gives a sense of unsettling importance. The colossal structure on view at the Virginia Museum of Fine Arts is both jarring and alluring, like a siren song.

But with a second and third glance a window of appreciation opens, and the beauty of the baroque forms and negative spaces act as a kind of magnet for that fictional third figure, which is the viewer, as if the universe expresses a law of balance just as it does gravity.

For Al-Hadid, the human figure is a compositional element and not a narrative character. In this sculpture, two figures are hidden and draped among architectural pedestals and landscape-like forms. An obsession with northern Renaissance painting is the impetus for the sculpture, whereby the planes, lines, and dimensionality of the master paintings are extracted into three-dimension. Paint appears to be lapping and dripping over geometry and architecture, oozing down classical stairwells and raining among metal clouds.

To achieve this, Al-Hadid approaches sculpture as a place or environment, not simply as an object. The materials are steel, fiberglass, gypsum, wood and aluminum foil. But the place holds all the lure and emotion, alive as a viewing experience and as the space the artist once inhabited. Her finger marks and the signs of her additive process are apparent at every angle. Starting with one structural element and a loosely held direction, Al-Hadid continues to add elements until the space takes its own breath. Ultimately the sculpture dictates its own path and Al-Hadid allows it the freedom to do so. Creator and created work in tandem.

For all their might, there's a lightness and transparency to Al-Hadid's sculptures, which translate to her drawings as well. Three drawings on vellum hang with "Trace of a Fictional Third," exposing her power to create dimension even on a flat surface. They're a purposeful accompaniment to the sculpture but not directly related to it, and illustrate well the conversation between one dimension and three.

Born in Aleppo, Syria, Al-Hadid often is cited as a Syrian artist, though she grew up mainly in Ohio. She received her master's degree in fine arts in sculpture from Virginia Commonwealth University and lives in Brooklyn, N.Y., where she keeps a massive industrial artist's studio. She's exhibited all over the world and has been included in many notable collections, including the Saatchi Collection and the Museum of Fine Arts in Houston. Her recent awards include a Pollack-Krasner Foundation grant and a Joan Mitchell Foundation painter and sculpture grant.

In a recent New York Times essay, Johnny Misheff supposes that Al-Hadid "likes to hide things." "Trace of a Fictional Third" reinforces her game of hide and seek, and shows that she delights in creating a place where treasure might be found. S

"Diana Al-Hadid: Trace of a Fictional Third" will be on view in the museum's 21st-century gallery through Sept. 2; free. For information visit vmfa.state.va.us.