Looking back and going forward with the Robbin Thompson Band. 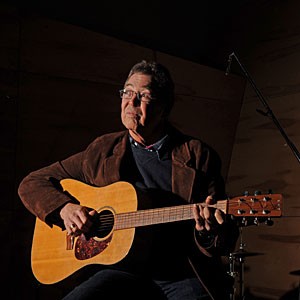 Robbin Thompson can come off like a very serious guy — contemplative, guarded, careful with his words. But the singer and songwriter, a longtime Richmond music mainstay, gets positively giddy talking about his latest project.

“I got the band back together for a reason,” Thompson says, breaking character and channeling the late John Belushi. “I was on a mission from God.”

And there was much laughter.

Thirty years ago, the Robbin Thompson Band was having similar fun, touring across the mid-Atlantic to sold-out crowds, fueled by the regional success of original Thompson songs such as “Candyapple Red” and  “Sweet Virginia Breeze,” a future state song candidate co-authored with Steve Bassett. The group broke up in 1983 — gigs were getting smaller and family life became more important than touring — but fans didn't forget the good times. They hounded Thompson for years about a reunion.

“We were such a great band,” he says, sitting with a laptop at In Your Ear Studios, the recording facility he co-owns on East Broad Street. “But what we did was never documented.”

And then it happened. Spurred on by Bill Reid, the owner of the National and Norfolk's the NorVa, Thompson and his former mates (guitarist Velpo Robertson, keyboardist Eric Heiberg, drummer Bob “Rico” Antonelli and bass player Audie Stanley) performed on a minireunion tour last year. “It was like pulling an old rusty bike out of the shed,” says Robertson, who's co-produced many of Thompson's post-band solo albums. “We were surprised that we could still draw a crowd,” Antonelli recalls.

The Robbin Thompson Band's Richmond reunion show was taped and is available on a new CD called “Live at The National.” There's also a DVD of the gig that includes video from a 1981 Hampton performance. It says a lot that the songs from the group's lean and hungry heyday don't embarrass the contemporary performances by a more mature RTB, which plays the National this week for a return engagement.

“I'm surprised at how quickly it gelled,” drummer Antonelli says of the group's re-emergence. “But all of the guys can still play. … We fell right back in the groove.” After leaving Thompson, members became in-demand session cats and stage constants in acts such as Billy Ray Hatley and the Showdogs, Bob Margolin, the Bopcats and the Skip Castro Band.
For the frontman, time spent with this stellar band was a high-water mark in an idiosyncratic career that began with the Tasmanians, a teenage garage group fondly recalled by diehard '60s music collectors. Thompson's dad was an aerospace engineer stationed near Cape Canaveral, but even the space race took second place to making music for young Robbin. “The first song I ever wrote was a rip-off of Jimmy Dean's ‘Big Bad John,'” Thompson recalls, smiling. “It was a surfing version.”

The professor in Thompson's community college Advertising 101 class told him that he had a knack for the ad game — “it's the only nice thing he ever did for me” — and recommended a place in Richmond called Virginia Commonwealth University. After attending the notorious Woodstock festival in New York (“it was the summer of '69, after all”), the Florida boy arrived in Richmond. There he found a welcoming art school and burgeoning underground rock scene.

One night, his band Mercy Flight found itself playing a gig at the Seventh and Marshall street parking deck with a Jersey group called Steel Mill. Thompson ended up ditching Mercy Flight and joining the out-of-towners: a then-struggling singer named Bruce Springsteen and half of the future E-Street Band.

“I quit school and went with them but it wasn't going to work,” Thompson says in retrospect about the Mill's inevitable breakup. “Two singers in the band … I suspect that he wanted me to play bass so that Steve [Van Zandt] could play guitar.”

Thompson ended up recording two locally popular albums in the mid-'70s, the first featuring support from veteran players such as Steve Cropper, the second a collaboration with friend Steve Bassett. It was his first manager who put the Robbin Thompson Band together, recognizing a group of players who weren't afraid to work. “We'd rehearse constantly,” Antonelli says of the band's heady touring days, sharing bills with the likes of LeRoux, Dixie Dregs and former Richmonder Pat Benatar. “We'd rehearse six to eight hours a day, five days a week. We had fun but we took it seriously.” Most of the group assisted in the recording of 1980's “Two B's Please,” Thompson's most popular release.

After the Robbin Thompson Band dissipated, the singer went solo, contributing to the soundtracks of movies such as “Gleaming the Cube” and “The Fighting Temptations,” and eventually winning two Independent Music Awards. Thompson has dabbled in everything from writing jingles — “it was a revelation to me that I could use my musical talents in other ways” — to performing in musicals (he spent three summers as the lead in the popular local production of “Pump Boys and Dinettes”). All the while he's been helping to build up Richmond as a recording destination. He assisted with the legendary Alpha Audio — a studio favored by hundreds of area music makers in the '70s and '80s — and then started up In Your Ear with fellow Alpha refugee Carlos Chafin. His last big adventure was working with the Asia Foundation on a worldwide advertising campaign to stop human slave trafficking. “I think Robbin is like a kid in some ways,” Antonelli says. “He's always saying, ‘I'll try this, I'll try that.'”

These days the veteran singer and songwriter is trying to recapture the ol' rock 'n' roll zeitgeist of his youth. With these new live releases, and another set of reunion gigs ahead, it sounds like the mission is getting accomplished.

“This music hasn't dated at all, so I think today's audiences will like what they hear,” Thompson says, getting back into serious mode. “This band still has it.”

The Robbin Thompson Band is scheduled to perform at the National Theater on Jan. 8. For information go to thenationalva.com. For more on the “Live at the National” CD and DVD, go to http://www.robbinthompson.com.