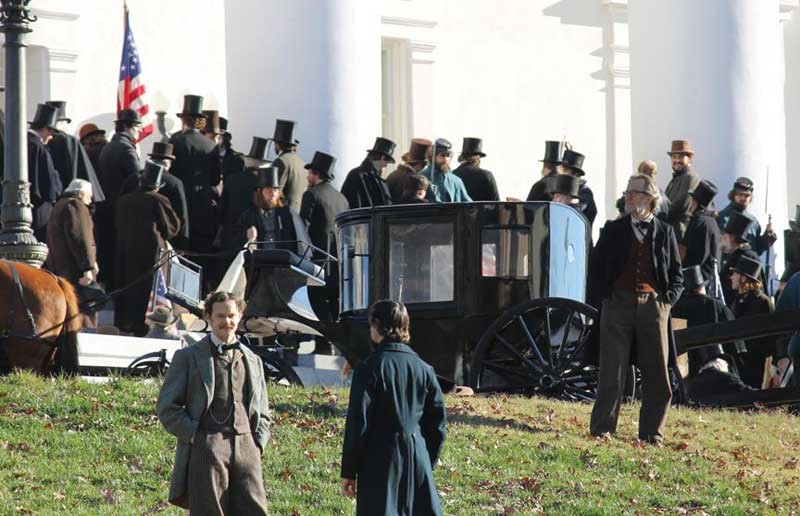 Prepare for Hollywood withdrawal. After two months of seeing famous faces in Richmond’s restaurants, shops and parks, Richmonders say goodbye to the film crew this week. After shooting one last, massive scene at Capitol Square on Dec. 12, the production is scheduled to move to Petersburg.

We’re gonna go ahead and name James Spader an honorary Richmonder. The man is everywhere — and he loves Carytown. Local lawyer Elizabeth E. Clarke spotted Spader with his fiancee, Leslie Stefanson, outside Jean-Jacques Bakery the afternoon of Sunday, Dec. 4. Their son was happily screaming and laughing; that’s what happens when you give a 3-year-old an ice cream cone, Spader joked. “They were very friendly,” she says, “and after collecting their son from the roof of their Prius, they drove off.”

The Lincoln cast descended en masse on the Roosevelt in Church Hill for dinner Dec. 6. “It was pretty much all of them. Not the big one,” one manager tells us. After the recent media flurry over his photograph at Arcadia, Daniel Day-Lewis has probably been ordering in pizza to his house in Church Hill.

John Hawkes dined at Cafe Rustica the night of Tuesday, Dec. 6 with “some other guy who had a Lincoln movie moustache,” says spotter Jamie Faulstich. A local hipster getting ready for next week’s Winter Sol-Stache? No: Tim Blake Nelson. It was a quiet night, Faulstich says, and no one bothered them.

And now, your moment of Zen: Hal Holbrook checked out the new IHOP Express at Virginia Commonwealth University around 2:30 p.m. on Monday, Dec. 5. But, he noted, he didn’t want pancakes.

The production may be moving south, but you may still spot some stars enjoying one last taste of Richmond. Send your sightings to lincoln@styleweekly.com, and get quicker updates on Twitter @StarGawkingRVA.