Scott Elmquist A front view of the 1928-designed Pine-Grace Apartments at 616 W. Grace St. in the shadow of the new, Stephen Holl-designed ICA. The building was demolished this week for 14 parking spaces.

The long-awaited hatching is five months off, but construction of architect Steven Holl’s Institute for Contemporary Art at Virginia Commonwealth University transfixes locals with the kind of breathless fascination that the British give a royal birth.

After a preview of the ambitious building’s interior, where galleries and auditorium, dining and atrium spaces are now under roof, a way-too-early review is in: The light-filled and interconnected rooms are spectacular, and these grand spaces will delight the senses. Also, the place seems so much bigger inside than from the corner of West Broad and Belvidere streets.

The building’s individual spaces read well. Upon entering from that intersection, visitors can size up things in a glance. The almost surrealist staircase winds upward while galleries and dining and retail spaces are clearly evident. Glass doors on the opposite side of the atrium announce and open onto outdoor terraces and gathering spaces.

What patrons won’t see, but planners have emphasized, for all its white and metallic gray surfaces, is how, well, green the building is. It will be heated and cooled with geothermal systems and if there’s a flat roof surface that isn’t covered in plant material, it’s only because of an interfering skylight.

The university and larger community are verging on the receipt of the smart and heroic landmark facility that has long been promised.

But as passersby scan the construction site and its environs, one question is inevitably asked: What’s up with the Sunoco station next door at Belvidere and Grace?

To my thinking, that’s OK, because the gas station makes contextual sense both architecturally as well as practically. It’s located at the nexus of two national highways and, until the museum’s scheduled Oct. 28 opening, has been ignored as a backdoor of this campus for nearly 100 years.

What puzzles me more is how cavalierly another modest structure that shared the ICA block — bounded by Broad, Grace, Belvidere and Pine — was dismissed as unworthy of saving, rehabilitating and putting into service connecting the Monroe Park campus. 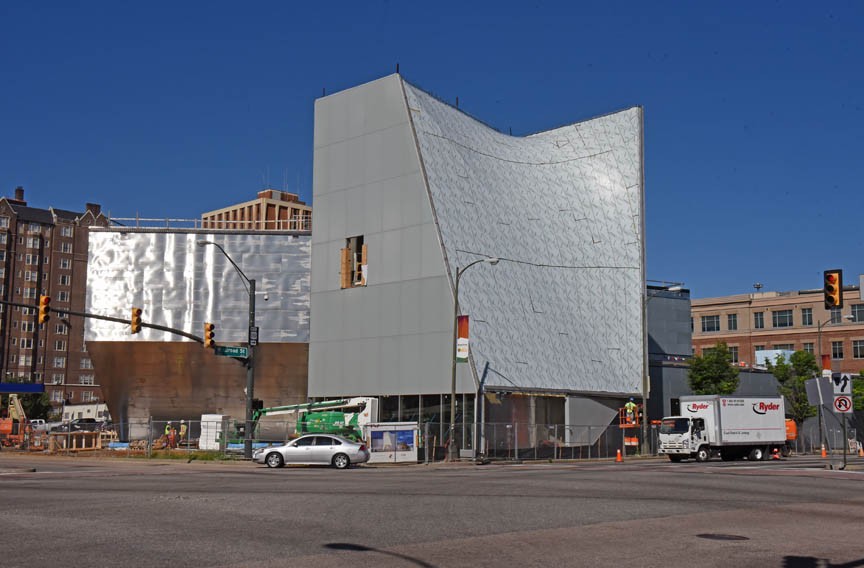 The underappreciated building was the Pine-Grace Apartments at 616 W. Grace St., a shoebox-proportioned, three-story, 22-unit apartment that anchored with a crisp right angle, its corner as effectively as the ICA acknowledges the grid and setbacks of its site.

The apartment house was designed in 1928 by Richmond architect Otis Spiers (1897-1970) at an apex of both the national and local economy. The red-brick, understated, but tightly detailed building exuded the colonial revival movement here from a time when architects William Lawrence Bottomley, W. Duncan Lee and others were building dozens of grander townhouse and country places in the style of the restoration of Colonial Williamsburg.

Pine-Grace was a rare survivor of a time when the 600 block of Grace and its neighborhood were a major medical center. St. Elizabeth’s Hospital was across the street, Grace and Saint Luke’s hospitals were within a few blocks. The neatly tailored apartment building housed nurses, medical technicians and a few medical-related researchers and biologists.

“That New York City tenement?” a university official responded when asked about the building’s fate.

“It’s full of asbestos,” another quipped on a different occasion, expecting me to acquiesce with an approving and sympathetic nod.

In other words, the fix was in — and that’s too bad.

Aesthetically and from an urban design standpoint, the elegant but frayed building — for which the university paid more than $2 million — served as desperately needed connective tissue to the campus and city grid and gave the Holl building extra pop as they shared common ground. There was subversive delight in a modest, oh-so-Richmond colonial revival structure sharing the same block and contrasting powerfully with Holl’s elegant symphony in metal.

The university has said the space will provide parking in the short term. But a gain of 14 parking spaces in trade for a perfectly good building that could house staff offices for the ICA or other university operations, plus perhaps a modest apartment or studios for visiting artists, is unbalanced.

And with the apartment building gone, the new structure will be approached and viewed from the Monroe Park campus with gas station and a surface parking lot in the foreground. So much for environmentally assuring imagery.

I know, the building would have been a challenge to restore, making accessible to those with disabilities and softening the raw, tenementlike stairwells on the eastern side. But the effort would have been worth it.

If there’s any extenuating circumstance to losing the building, it could be that VCU could consider building a new alumni house on the site.

Such a facility is something being discussed since the university’s indelicate and inexplicable shutting down of both the Richard Robertson Alumni House and the Scott House on West Franklin Street as third places of hospitality. They weren’t only for grads, but also the broader university community on a campus that’s becoming increasingly institutionalized, and not in an architecturally savvy or humanistic way.

How cool would it be for a new alumni house to share the block with the university’s new world-class contemporary art center, using its caf3, bookshop and assembly spaces?

The institute touts itself as being all about building relationships and partnerships, and no doubt the bright minds will deliver the goods when it come to a contemporary art and performance scene. But from an urban design standpoint it’s time to stop dissing West Grace Street by removing historic building fabric with surface parking, of which the downtown YMCA and the Renaissance event center are aslo guilty a few blocks to the east.

As Margaret Peters, one of Richmond’s respected historians and authors, recently wrote, “I feel the unique relationship between buildings and the districts and people who live there — is a symbiotic link that tells us so much about a community’s history to say nothing of its social dynamic.” S