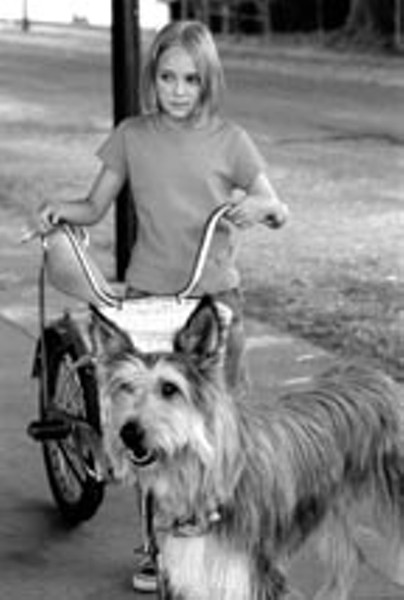 Based on an award-winning children's book by Kate DiCamillo, "Because of Winn-Dixie" is set in the very small town of Naomi, Fla., a village that has never recovered, economically or emotionally, from the not-too-recent closing of a local candy factory. Naomi appears to be something of a Mecca for those enduring quiet desperation. Its newest inhabitants are 10-year-old Opal Baloni (AnnaSophia Robb) and her preacher father (Jeff Daniels), who contribute their own note of sadness to the town's melancholy ground: the memory of Opal's mother, who has abandoned the family.

Very quickly, however, these darker matters are pushed into the background by Opal's encounter with a dog running wild through a supermarket. Overcome by a protective instinct, she impulsively adopts him, much to the annoyance of her harried father and the trailer park's surly landlord.

Named for the store where it was discovered, the winsome, but sometimes skittish, pup helps connect Opal with a handful of Naomi's plentiful supply of depressives and misfits. Friendships develop. By the end, everyone is at least a little less depressed and a little less at odds with others in the town.

In less thoughtful hands, this story could have been oppressively heartwarming or drearily educational. Indeed, the first half will strike adults as too sweet for its own good, relying as it does on Winn-Dixie's adorable antics and on a menagerie of bunnies, piglets, and assorted fowl watched over by a pet store caretaker played by a listless Dave Matthews, in his second big-screen role. All this, however, seems intended to draw in younger viewers by giving them what they're accustomed to, preparing them for the more challenging stories ahead. By the time we meet Gloria (played by the incandescent Cicely Tyson, in her first movie role in eight years), a wise and friendly recluse with (of course) a sad past, we've drifted into another world, and the dog yields center stage to the human beings.

This is not to say that the movie starts out as "Benji" and segues into "Dogville." When Opal endures the taunts of bratty boys ("Baloney breath," they call her, mocking her Italian surname), even childish petulance has an air of innocence about it. "Hell" is the closest thing in this film to a swear word. But several scenes in the second half revolve around adults' attempts to teach Opal something of the world she's growing up in, and the discussions are both frank and generous. Opal learns, for example, that sometimes drunkards manage to get their lives back in order; sometimes they don't. Sometimes the heart of a bully (child or adult) can be softened; sometimes not. Sometimes families fall apart for good. None of this, one hopes, will come as a revelation to older viewers, but the movie offers a loving but strikingly tempered assessment of family and town life that one seldom finds in today's raucous family films. And since the movie is so honest about the possibility of failure, those stories that do turn out well are all the more moving, even surprising.

Performances throughout are full of appeal, especially those of Tyson, Daniels, and Eva Marie Saint, who plays an elderly librarian who becomes Opal's first new friend. As the little girl at the heart of things, AnnaSophia Robb starts out all wide eyes and big, toothy smiles. Like the film itself, her performance becomes more natural as her story deepens. ***1/2 S