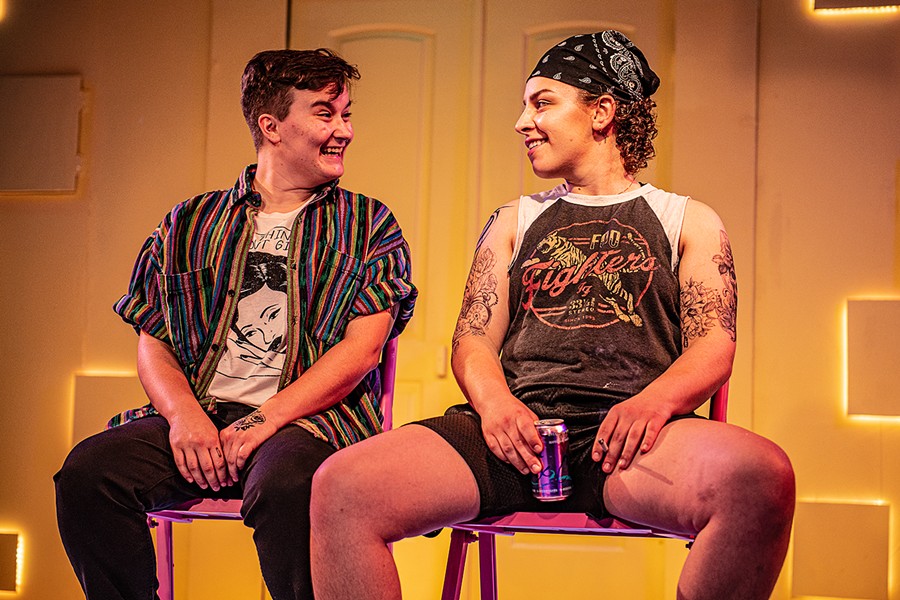 John MacLellan August Hundley and Kasey Britt as two of the Betties in “Collective Rage: A Play in 5 Betties” by Jen Silverman, playing at Richmond Triangle Players’ Robert B. Moss Theatre through July 2.

Richmond director Chelsea Burke is not afraid to bring pussy to the stage.

I’ve seen her do it over and over again. Think of Quill Theatre's 2019 “Taming of the Shrew” with an all-female cast, which dared to let abuse look like abuse, or more recently, the Conciliation Lab’s “How I Learned to Drive,” which did the same. Before she came to town, I don’t think I had ever seen such pussy in the thea-tah, and my goodness, I was missing it.

To be clear: I’m not saying I hadn't seen shows with women. Of course, I have seen plenty of those. But some felt so far removed from representing a female perspective I recognized that I left the theater feeling disappointed (see Swift Creek Mill’s 2019 “Savannah Sipping Society” or 2018 “Always a Bridesmaid”) or outright offended (Quill’s 2017 “Lysistrata”). These shows fell short of my expectations because they perpetuated stereotypes, keeping female characters compartmentalized, small or in some other way oppressed by the male gaze.

There have been rare shows with women at their core that did move me, that did feel like they portrayed a radically honest female perspective (Heritage Ensemble Theatre Company’s 2016 production of “Ceremonies in Dark Old Men” or TheatreLAB’s 2017 production of “Dry Land,” and 2018’s “A Doll’s House,” or any of the many excellent works produced as a part of the 2019 Women’s Theatre Festival).

But as a critic, I have spent some long, exhausting dry spells during which I was going to shows every weekend and still coming home thirsty. Thirsty for what? I thought I was craving more female perspective as a guiding artistic principle. What I didn’t realize was that I didn’t need a specifically female perspective, exactly. I didn’t even need all of the characters to identify as women. No. I can see now that what I’ve needed and wanted all along, the only thing that would quench this thirst of mine, is to see more art, more performance, more theater free from the perspective of non-pussy owners. Which is to say, more art portraying the radically honest perspective of people with pussies of all gender identities onstage in Richmond. After seeing Burke’s latest, “Collective Rage: A Play in Five Betties” at Richmond Triangle Players last weekend, I think my thirst may finally be quenched.

Burke seems undominated by the male gaze in her work, unafraid to push the envelope, to say the thing outright, to make it explicit. Now take a director like Burke and pair her with playwright and novelist Jen Silverman, author of the novel “We Play Ourselves,” and another artist unafraid of eschewing the male gaze and the perspectives of men. Throw in the creative freedom and resources at Richmond Triangle Players and you have, I believe, the most pussy-drenched production this city has ever seen.

The show begins with Dasia Gregg’s bright, flashy set in various hues of pink. Walls and furniture fold up and easily out of the way, tucked into compartments like a Polly Pocket doll house; sheer pink curtains bathed in Deryn Gabor’s lighting design make everything even more pink. Gregg’s projection design marks each new scene with titles projected bright white against the pink and read aloud by a robotic female voice (think Siri, Alexa), part of Candace Hudert’s brilliant sound design. The production isn’t subtle in its imagery, and neither is the script.

The full title of the play is, “Collective Rage: A Play In 5 Betties; In Essence, A Queer And Occasionally Hazardous Exploration; Do You Remember When You Were In Middle School And You Read About Shackleton And How He Explored The Antarctic?; Imagine The Antarctic As A Pussy And It’s Sort Of Like That,” which gives a bit of context, but not the full story. Yes, this is a show about five people named Betty and their relationship to pussy [the word is used repeatedly throughout the play], but it’s also really about “the thea-tah.”

We meet the five Betties one by one through monologues and interactions at dinner parties and while they’re working on their trucks. The Betties, racially diverse and with a variety of different gender identities, are all a bit angry, and, in one way or another, they’ve got pussy on the brain. “I think a lotta things that seem like art are maybe actually just about pussy. And then also, things that are mostly about pussy might actually be about art,” Betty #4 says with conviction, after learning about Betty #3’s night at the “thea-tah” with a married woman.

The show Betty #3 describes is Shakespeare’s “A Midsummer Night’s Dream,” but she’s preoccupied with “the play inside the play,” i.e. Bottom’s Play. Wanting very badly to spend as much time with Betty #3 as possible, Betty #4 suggests they work together on their own piece of devised theater. Betty #3 takes to the idea, deciding that she will not only invent a play of her own, but also direct, produce, design costumes and makeup, and she casts herself in the lead role, leaving the other Betties to conceive and develop their roles as wall, lion, moonshine, and prologue.

Over the course of the play, we see these roles take on metaphorical weight as each of the Betties works to embody their theatrical personas: What does it mean to invent a play? To be a wall or a prologue? How does an angry Betty learn to shine and how does a meek Betty become a lion? The answers, it turns out, all have a lot to do with pussy.

While plenty of hilarity ensues, this play is also, like Shackleton, exploring uncharted territory. Burke’s direction keeps the vulnerability of these characters right at the surface, making for more than a few tender, honest moments of seriousness delivered in between the jokes, grounding these characters in their humanity throughout the play.

The production boasts a standout cast, some of whom are new or returning to the Richmond stage after a hiatus. Lanaya Van Driesen really brings the rage as Betty #1, a rich, white Betty seeking an outlet for her anger at the State of Things.

As Betty #2, a middle-aged Betty exploring her own Antarctic for the very first time, Nora Ogunleye is equal parts hilarious and endearing. However, while Ogunleye does great work in a role that is definitely asking a lot, her portrayal on opening night did sometimes feel a little caricature-ish, like she leaned just a bit too far into the comedy of the piece in moments that could have benefitted from a more serious approach. The tension between the personal reckoning this character is experiencing and the hilarious ways in which she approaches it is the challenge of this role, so I’d love to see how Ogunleye’s performance evolves over the course of the production, as she lives onstage with Betty #2 night after night.

Zoe Cotzias is perfect and so, so funny as Sephora employee/social media influencer-turned-actor/director, Betty #3, somehow the smartest and most naive of all the Betties. And as the passive, lovelorn, yet simmering beneath the surface Betty #4, August Hundley’s performance shows both depth and restraint. But on opening night, it was understudy Rachel Garmon-Williams who really stole the show as Betty #5, a non-binary boxing instructor whose calm, stable presence, a perfect, sexy blend of masculine and feminine energies, was charming enough to seduce the audience right along with one of the other Betties.

I hope to see each of these actors onstage again soon, and I am thrilled to see how lovingly this community, and Richmond Triangle Players in particular, has continued to embrace and support Burke’s unique and unapologetic vision as a director, including taking on this challenging, experimental, thrilling –and did I mention absolutely hilarious– play.

Go see “Collective Rage: A Play in Five Betties.” If you’re not sure how you feel about seeing pussy on stage, I encourage you to come out and see this play anyway. There’s really nothing to be afraid of.