A quest for enlightenment on a historical bar crawl. 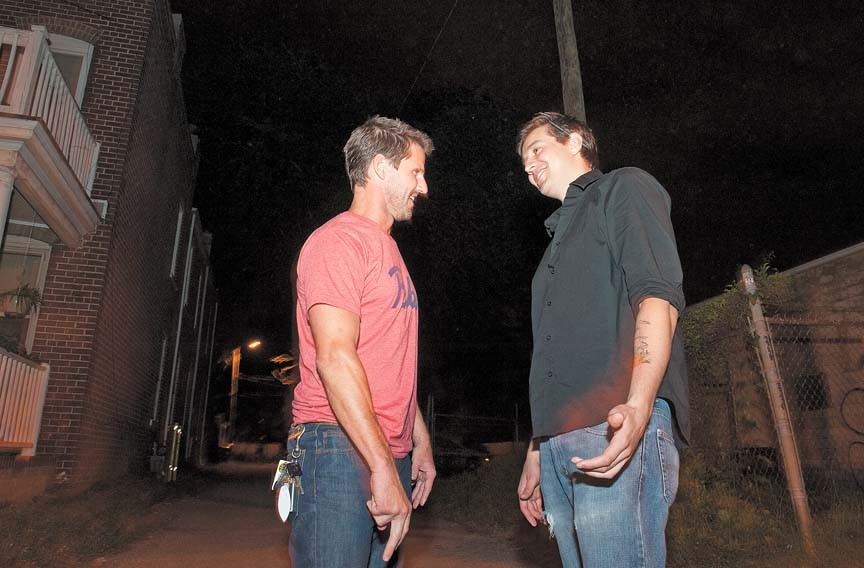 We're supposed to learn from history so we aren't doomed to repeat it. And if my past is any indication, I could use a little less doom and a lot more answers.

So the idea of heading out for a quest into one of America's most historic cities makes perfect sense to me. I convince my friend and man-about-town Randy O'Dell of Bellytimber and Mezzanine to come along. He's a drinker, a thinker, a dreamer. You don't go from bartender to co-owner of two successful restaurants without a little Lewis and Clark and whole a lot of crazy in your head. I knew he would be perfect.

We assure ourselves of the value in a "historical bar crawl," walking around town, visiting various historical sites while carousing in bars. We would delve deep into Richmond's past while still living the nightlife, the life we know best.

I imagined we would encounter adventure, intrigue, wise hobo sages dispensing life advice. We would figure out our place in Richmond by exploring the past. By our cunning and fearlessness, we would take the city like two dashing buccaneers, all the while pondering how we got here.

Then I, your fearless and intrepid writer, would document the journey through a gin-soaked eye, making myself into a character from a Jimmy Buffett song. Gonzo journalism.

This is how we find ourselves at the base of the Robert E. Lee statue at 10 p.m. on a Saturday. The general's face, unveiled in stone here 121 years ago, looms over us in the dark, while we take our first sips of bourbon from a flask.

Well-intentioned and mercilessly upbeat, O'Dell — despite a lack of sleep from a self-admitted bender the previous evening — suggests we make an effort to justify our beginning a bar crawl on Monument Avenue.

"Is there a plaque or something we can read?"

We make our way to the nearby Cellar Door. Our march on Richmond has begun.

We set a fast and furious pace. A skirmish line of two drinkers, out beyond the main infantry. We head down the stairs and into the basement of the Stuart Court Apartments, where a cozy Cellar Door bills itself as the only restaurant on Monument Avenue.

Here we encounter other like-minded souls. The drinks flow and we talk to one of the proprietors, Justin Adny. His thick and luscious beard makes me think Civil War and Lincoln. I'm jealous of his whisker-growing prowess for a second.

"VCU should award me an honorary degree in psychology for all the problems that drunk people thrust upon me," Adny says.

"The bar is a vacation from life," O'Dell replies. "It's a fine line between what we do and alcoholism, and working in bars we get to see that line crossed. This, what we're doing right now ... we're part of a subculture that makes their living this way."

Idle remarks from service-industry types who have seen their share of drunks. I imagine that this is the small talk that one makes before the horror of war. Something to keep the mind clear, unfocused.

We leave Cellar Door and walk past the old edifices that dot Franklin Street, continuing the search for a piece of the past and what it might hold. We reach the entrance of Cous Cous and step in.

"This used to be a bar called Chuggers," Adny says. "I drank here underage all the time. They never ID'd me because I've always had this beard."

I stew in my baby-faced envy.

In Cous Cous it's steady for a Saturday. Young groups of Virginia Commonwealth University girls are paired off in the dining room and the usual assortment of laid-back, tattoo-sleeved, bike-messenger types ring the bar. It's dark and it's probably the closest I'll ever come to Morocco. I like it here.

I order shots of Jameson, all the while wondering if I should order bourbon instead of an Irish, European-based whiskey. Seems unpatriotic of me.

O'Dell gamely soldiers through his shot. His earnestness on this cockeyed search is giving me hope, even while our lack of preparation and knowledge of Richmond history is becoming more and more apparent. I try to stay positive.

Meaningful questions are few and we have yet to find any answers. I ask aloud to nobody in particular if perhaps we should add some performance-enhancing drugs into the mix.

WWJD? (What Would [Stonewall] Jackson Do?)

In a cab toward Church Hill we encounter a racist. Bewildered, we laugh nervously as the cabbie tells us his double-standard theory about why a channel called White Entertainment Television would never work. Not wanting to upset a large, tatted-up, somewhat angry cab driver, O'Dell and I just sort of nod our heads until we reach the Patrick Henry Inn.

The former capital of the Confederacy still harbors racists. As much as Richmond has changed since its days as a bastion of Southern gentility and home to the leaders of the South, some things, and some people, will never come around.

Idiot cabbie hates black people? This isn't the answer we set out to find.

The Patrick Henry Inn, a gem of a bar, is a stone's throw away from St. John's Episcopal Church, the spot where Patrick Henry delivered his "give me liberty or give me death" speech to the Second Virginia Convention, helping to convince a torn colony that Virginia needed to send its troops to fight in the Revolution.

The Inn is small and somewhat divey, everyone smoking cigarettes around the crowded 10-seat bar. I imagine I'm drinking ale and cursing the Tories. In reality I drink vodka and curse no one.

O'Dell seems slightly off-kilter. Is he losing his will to visit Richmond's history, or is he just drunk?

I mention to him that "vodka didn't exist in the colonies." Giggling, I imagine Ben Franklin slamming orange crush shots.

The gate at St. John's is padlocked. O'Dell, as if he's about to scale the brick wall surrounding the grounds, pulls himself up by his fingertips. Turns out he's just doing pull-ups. My plan for us to waltz right into the church, put on powdered wigs and perform a re-enactment using old-timey, cockney, slightly high-pitched voices, has been foiled. Why in the world did I waste $40 on these wooden teeth earlier in the day?

Staggering in front of a church where Thomas Jefferson and George Washington once gathered, and perhaps where our nation truly began to take shape, means very little to me at this moment. I grasp for something, anything to commemorate the occasion. Nothing comes out. No slurred historical soliloquies to a silenced and rapt group of bar goers from this guy.

What was the purpose of this night again? We're losing focus. O'Dell looks noticeably pumped up after his St. John's pull-up session.

The night dissolves into more bars and less history. We decide to visit the historic Fan District and its history-drenched historic bars for a few more historic shots of Jameson.

Avalon is packed with one of the most eclectic crowds that Richmond can offer. Old, young, hip, nerdy-hip, black, white, Asian, drunk, sober, etc. The racist cabbie would've despised this place.

I began to realize that maybe this search was probably never going to find any answers to Richmond's or life's great mysteries. It's a depressing thought. A creative bartender and I can't even conduct a proper bar crawl.

Content that I've failed miserably at life, I order another drink.

From Richmond's historic highs and its stand against tyranny at St. John's, to some of its less-educated inhabitants' still deeply rooted Civil War-era beliefs, on this night, this small snapshot, we get to see a tiny portion of a city that will forever hold a large amount of history.

OK, that was my attempt to get all deep on you, to make a story where there really isn't one. In reality, history did repeat itself: Two bartenders, two friends, going out and tearing up the town was the end result of a grand, ambitious, unrealistic plan.

I'm just not sure that a bar crawl will ever bring about answers, which leads me to fear that with the way people like O'Dell and me live our lives, we'll never find any explanation to anything.

Maybe thinking about the past isn't the way any young man or woman should live their life. I'm OK with this. At the very least we're going to have one hell of a good time on our own personal, alcohol-induced journeys.