Thinking Outside the Bag

Relay Foods is connecting to farmers, food vendors and supermarkets to deliver your groceries to you. But are you ready to give up the weekly shopping trip? 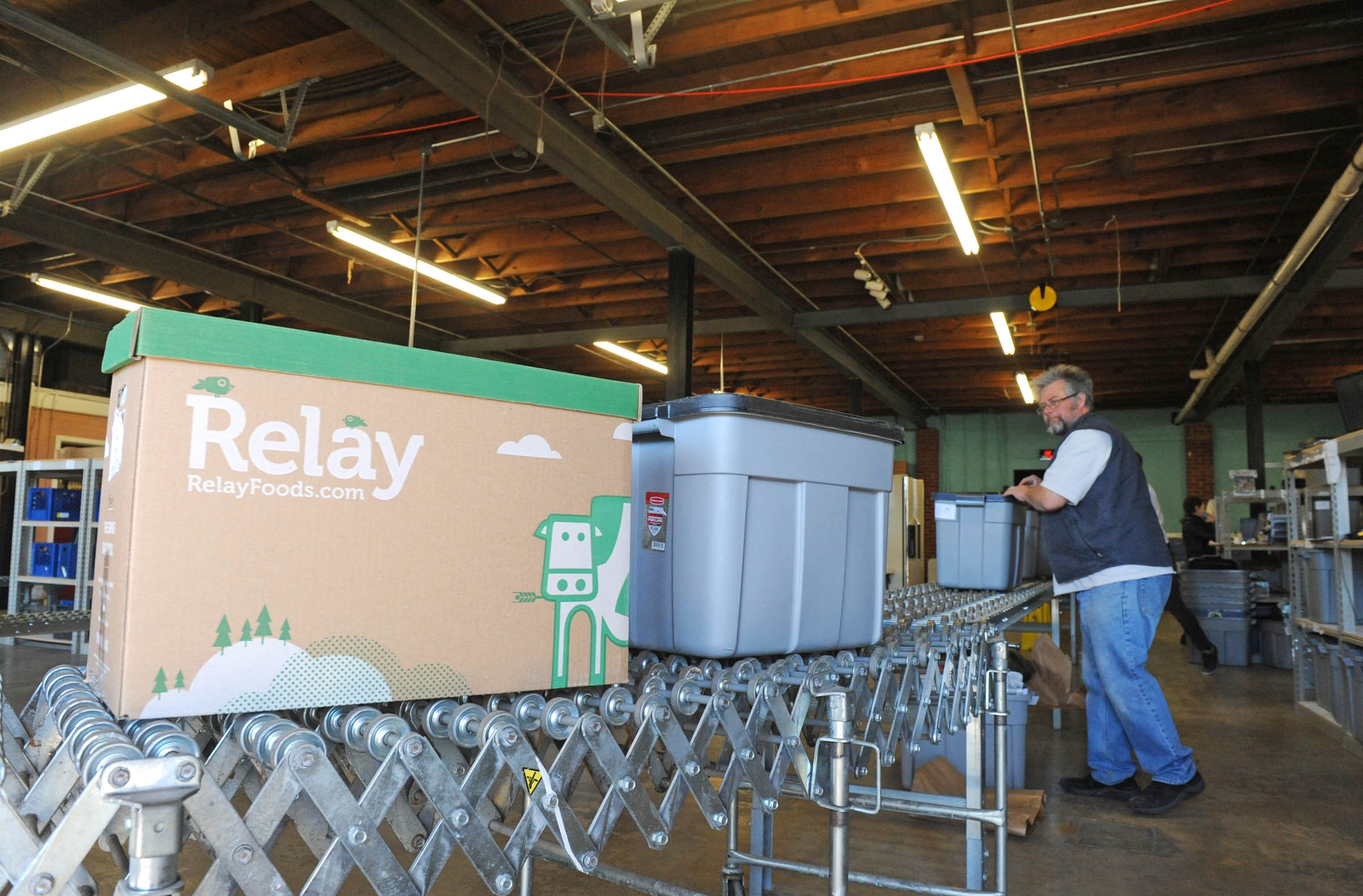 It looks like any other routine commercial ritual performed in one of Richmond's aging manufacturing districts. But one tech start-up is betting millions that it's a shopping revolution in the making.

Here's how it goes: On a brisk, sunny spring morning in Scott's Addition, Justin Hla-Gyaw loads 15 dull, gray, Rubbermaid tubs into the back of a bright green box truck. It bears the image of a contented-looking cow and a web address: RelayFoods.com.

Hla-Gyaw circles the vehicle, conducting a showy safety check that seems to consist mostly of kicking the truck's tires. Satisfied, he climbs into the cab, rolls down the window, and sets off on a four-hour drive across the metro area, filling grocery orders that Richmond shoppers placed the night before at Relay's website.

Relay is trying to do for fresh vegetables and pantry items what Amazon.com has done for books and electronics. Can it work in Richmond? This is a medium-sized, car-centric city still enamored by Ukrop's Super Markets — about as traditional a grocery store as you could get, and one which ceased to exist three years ago.

Relay says Hla-Gyaw's trip around Richmond is central to the groundbreaking advancement in retail efficiency that the company's engineering here. The route takes him about four hours — from an urban farm in Manchester to a cupcake shop in Carytown, then deep into the West End and its disparate mishmash of ethnic markets and specialty shops. While the morning progresses, the tubs fill with the area's diverse and delicious offerings: fresh-cut kale, still-warm bread, Eastern-European cheese from a Polish market that smells of kielbasa.

The groceries are ready for customers to pick up at one of a handful of distribution sites in the afternoon, getting the food into kitchens by dinnertime.

Relay's executives acknowledge what they're trying to do isn't easy. Judging by past efforts, it's risky too. One of the biggest failures of the dot-com bust in 2000 was Webvan, a web-based grocery delivery company that in two years went from being worth $1.4 billion to, well, nothing.

"This model's been tried since the late 1990s," supermarket consultant David Livingston says. "I have yet to see anyone be successful with it."

But bolstered by $8 million in new capital from investors, Relay is pushing aggressively, hoping to reach profitability by the end of the year. To do that, they say they'll need to quadruple their business here.

Relay started in Charlottesville and expanded almost three years ago to Richmond. Company officials won't say how many regular shoppers they've amassed, but the trucks they dispatch across the city aren't exactly full, and the employees who man distribution sites seem to spend more time reading than handing food to customers.

The company says its biggest barrier to growth is convincing shoppers to abandon the weekly trip to the grocery store in favor of Relay's vast and somewhat daunting online catalog. But it has a strategy — and a devoted staff of evangelists.

Hla-Gyaw, a recent University of Virginia graduate, has been with Relay from the beginning. He says once customers understand how Relay works, the value is unmistakable. After all, he asks, who besides Relay will drive all over the city for you to pick up hot sauce, tofu, fresh pasta and a cupcake? "It's really great," he says, smiling, while the big truck bounces down the expressway. "It's just really great." 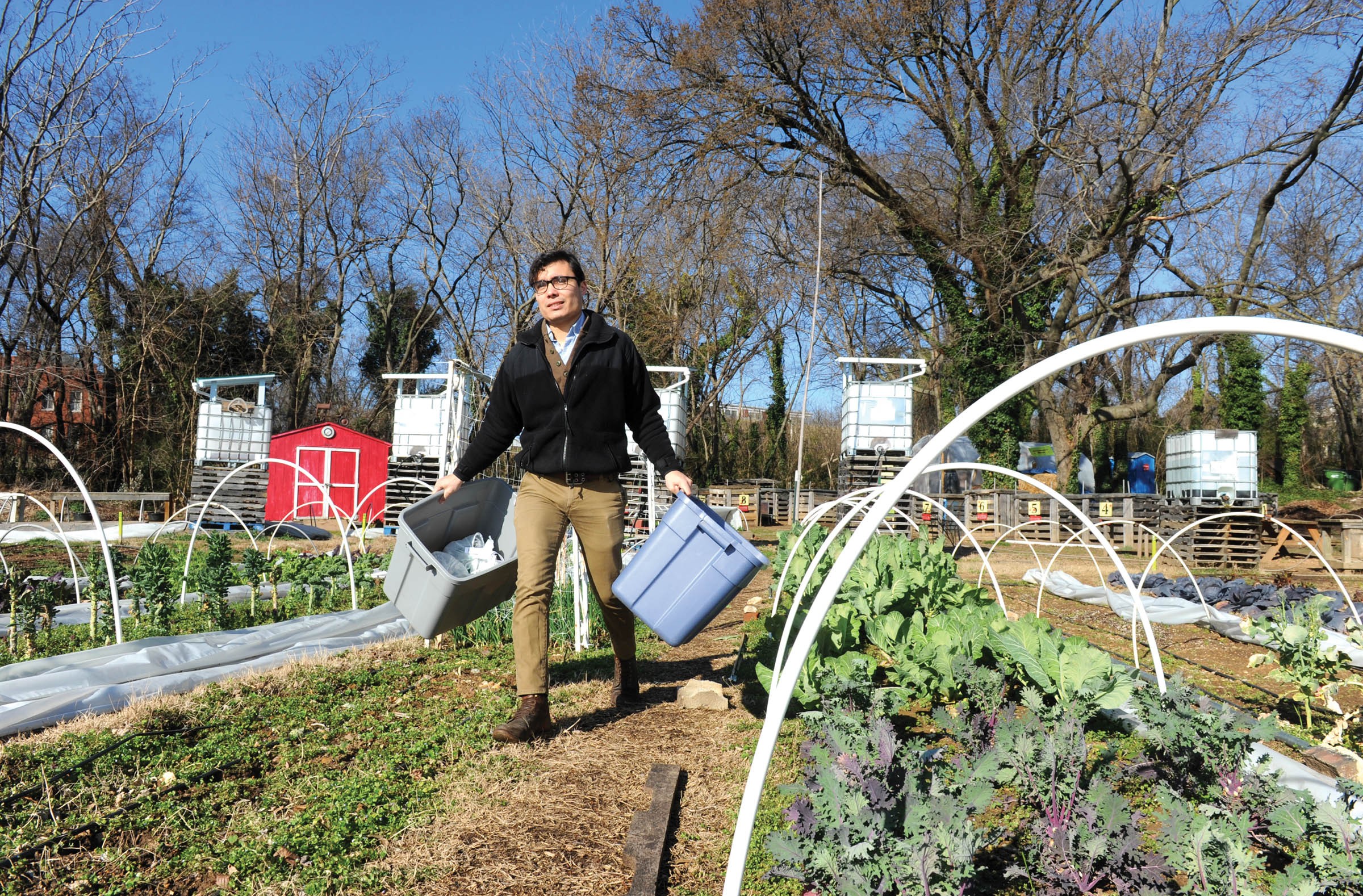 Relay Foods' marketing materials give off a feel-good, farmers' market kind of vibe. Don't be fooled: Relay is a technology company driven by complex software, not a hippie grocer run by longhairs.

The company was founded by Zach Buckner, a 34-year-old U.Va. graduate with a master's degree in electrical engineering. And rather than being born of a classic "Aha!" moment, the idea sprang from a pointed conversation with a fellow alumnus and executive at FedEx. Buckner wanted to start a business and was looking for suggestions.

"I asked him, 'What unsolved problems are there in freight?'" Buckner recalls.

And that's when Buckner's friend told him about the horrible inefficiency of the so-called "last mile."

"Freight will move from the farm or a factory in an 18-wheeler to a distribution center and then a big-box store," he explains. "And that freight will move at a cost of 10 cents per ton per mile."

No problems there. But consider the cost of moving products from the store to a consumer's home — the last mile. The cost per ton per mile jumps up to an average of $44.80, he says.

"What's happened," he says, "is without anyone noticing, and without the stores trying to fix it — because it's your dollar, not theirs — is there's been a [448-fold] decrease in efficiency. And it's ridiculous. And it's clearly not the right way to do this. And I set out to solve that problem."

In the summer of 2007 he incorporated the company as Retail Relay. The name reflected the breadth of Buckner's initial ambition. He wanted to sell everything you'd normally have to drive in a car to get. By working with retailers to sell their wares on his website for a markup, the early prototypes accomplished that by designing software that put, for example, a local hardware store's inventory online. You could buy things as varied as machine screws and children's car seats.

It quickly became apparent that trying to sell screws and car seats online wasn't a great idea, Buckner says. The mishmash of products was difficult to market, and by the time the first version of Relay opened to the public in early 2009, Buckner had narrowed his focus to upscale food that's increasingly in high demand. 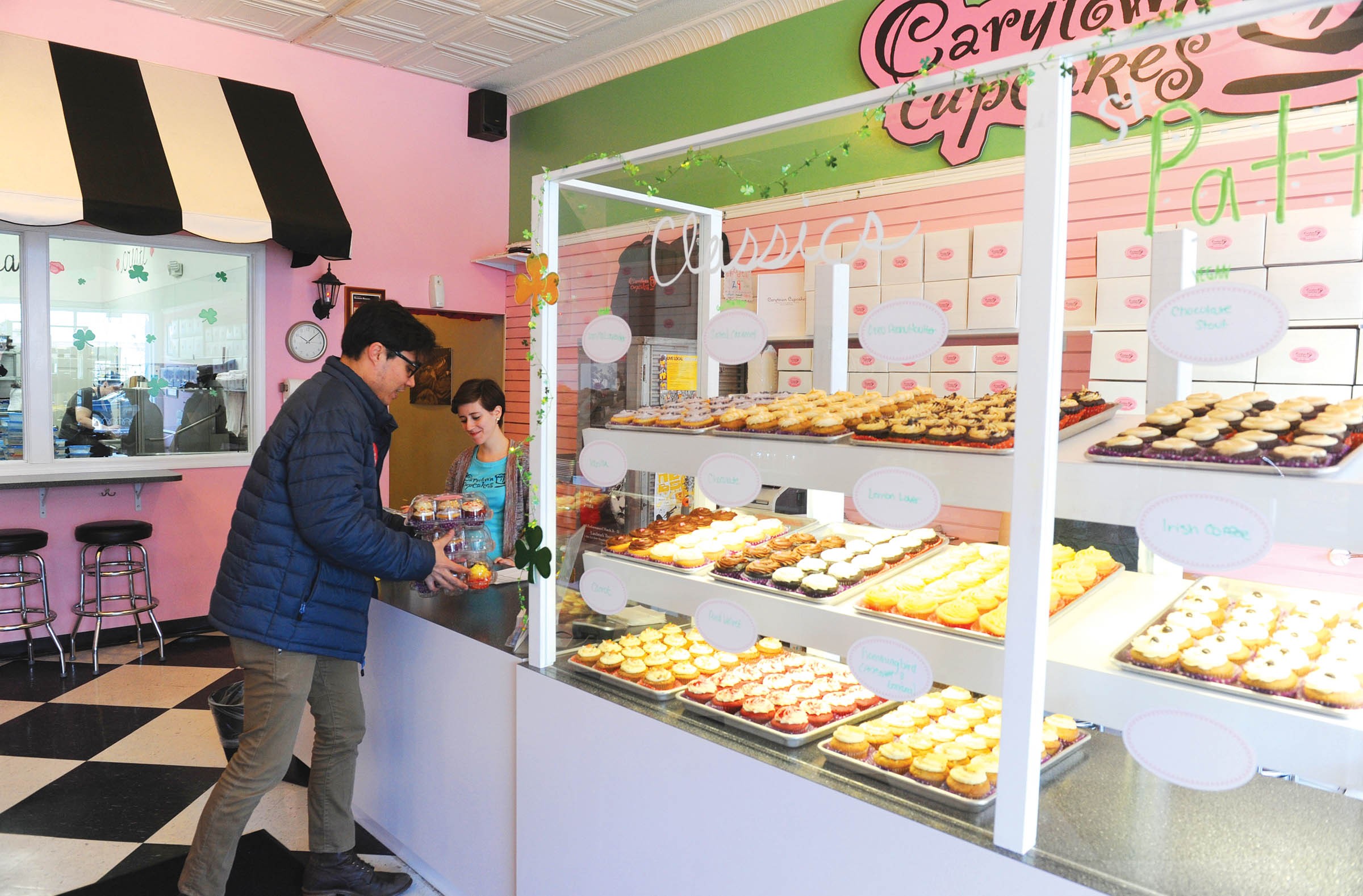 The company's initial launch was funded by about $3 million, a mix of venture capital investors and money won in a business-plan competition. But what is it that differentiates Relay from the spectacular failure that was Webvan and existing grocery delivery services such as FreshDirect.com and PeaPod, which operate in larger markets?

Buckner says the key is that Relay keeps virtually nothing in stock, thus eliminating not just immense overhead but the warehouse space needed to move it. Instead of operating as a shadow grocery store with loading docks, Relay works exclusively with existing grocers, producers and vendors.

If you order some dry beans, a can of soup or generic whole milk, chances are the item will come from the Whole Foods Market in Short Pump, where Relay's employees work overnight pulling orders from the shelves.

Similarly, all the orders in Richmond for eggs, meat or vegetables from a specific farmer are routed via email or fax overnight to the farmer. The farmer fills the order, which is picked up by Relay and delivered to the customer.

The merchants Relay works with sell goods to Relay at wholesale prices. Relay then marks them up to retail. The result: That gallon of organic milk and bag of kiwis you'd drive to Short Pump to buy at Whole Food Market is the same price in the store as it is on Relay's web site. Relay just gets it closer to your home, and for no added fees.

The system keeps the cost of operating in a given market incredibly low compared with what it would take to open a traditional supermarket and stock it with the requisite inventory, Buckner says. The system has the added benefit of connecting small, local producers to new customers. And Relay's grocery-store partners benefit from a boost in sales with no added labor on their part. 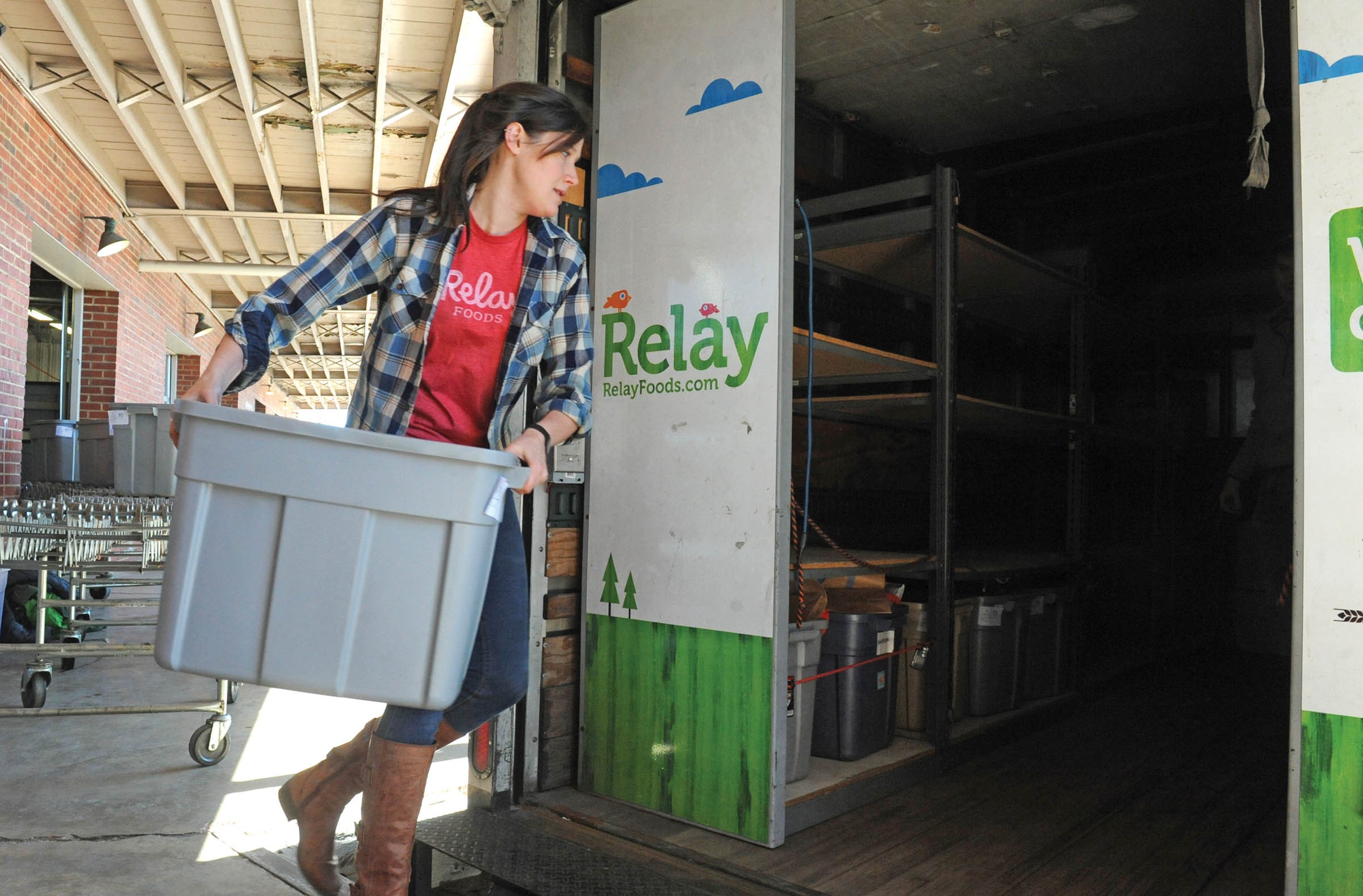 The kind of impact Relay has had on the local businesses it works with depends on which ones you talk to.

Dawn Schick, the owner of Carytown Cupcakes, says Relay probably accounts for less than 1 percent of her business.

On the other hand, Sally G. Schwitters, executive director of Tricycle Gardens in Manchester, says the small, urban farm now sells more produce through the Relay website than its own farm stand in Church Hill.

"It works well — I mean, it really has worked well," she says. "We get the orders. They come in at about midnight. Our farm manager prints them out in the morning, goes out to the farm, does a harvest, then they pick them up.

"We really value that it helps keep our farmer on the farm," she says. "That's where he wants to be, rather than in a truck trying to distribute across the region. And that's what Relay does for us."

Relay may not have completely eliminated the last mile for consumers — they still must stop by one of the company's designated distribution sites to pick up their orders. Though for an additional fee orders can be delivered to their doorsteps. By locating its distribution sites throughout the city, however, Relay has succeeded in cutting out a significant amount of driving for consumers and local producers. 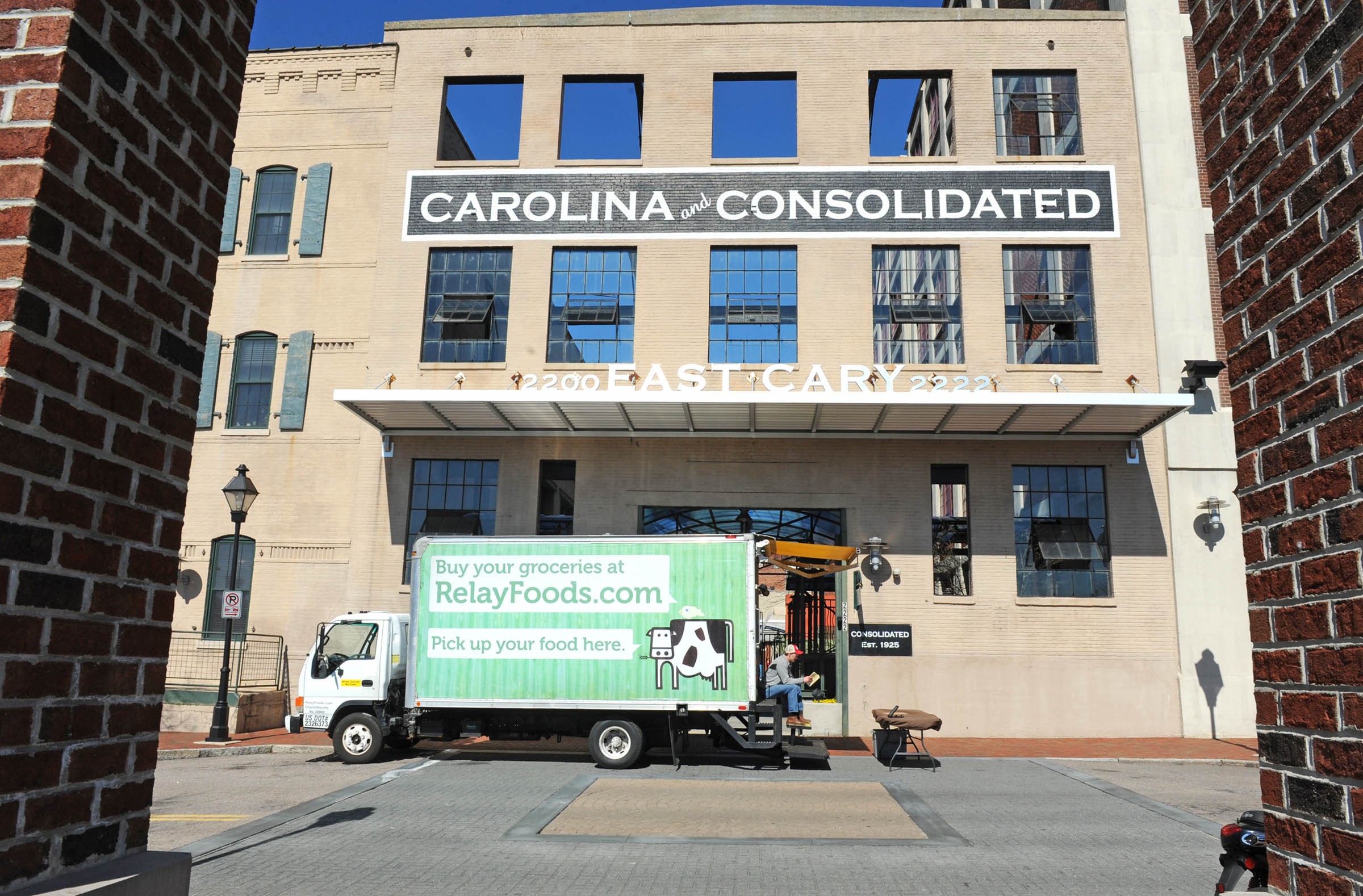 So if Relay has a system that basically works and solves a problem that you can argue exists, where are all the customers?

Caesar Layton, Relay's director of marketing and sales, says it's just not easy to get people to decide, "Hey, I'm going to start shopping for vegetables online."

"One of the hardest parts from the marketing standpoint is convincing people to shift a habit they've had their entire life," he says. "Buying food over the Internet is the last piece of the e-commerce puzzle that hasn't been cracked. People are still kind of skeptical. It's not a comfortable process and convincing people to make that change is tough."

Livingston, the supermarket consultant, is skeptical that a service like Relay will ever be successful in a medium-sized market such as Richmond. "It usually only works when you have a very large population without cars," he says. Even in markets that fit that criteria, Livingston says, he hasn't heard of a single online grocer that's reached profitability.

That's because most people like going to the store and shopping for food, Livingston says. "The biggest challenge is that grocery shopping is not an unpleasant experience," he says. "You're trying to convince people not to like something that they already like."

As for Relay's promise to save you time by picking up food from dozens of specialty vendors, Livingston questions whether there's a large enough base of customers "who take their food that seriously that they're going to want to shop that way."

But Relay executives have a plan: In an effort to affect the kind of growth they need to become profitable, they say they're focused on personal introductions to their website. They offer incentives for customer referrals with discounts through their tell-a-friend program. They also ask customers to consider serving as hosts of dinner parties with food provided courtesy of Relay in exchange for a sales pitch.

To reach people who don't already know Relay customers, Layton says, the company focuses on digital advertising through Google and Facebook. Likewise, the company has a regular presence at area farmers' markets, where employees with iPads introduce shoppers to the site and walk them through their first orders. 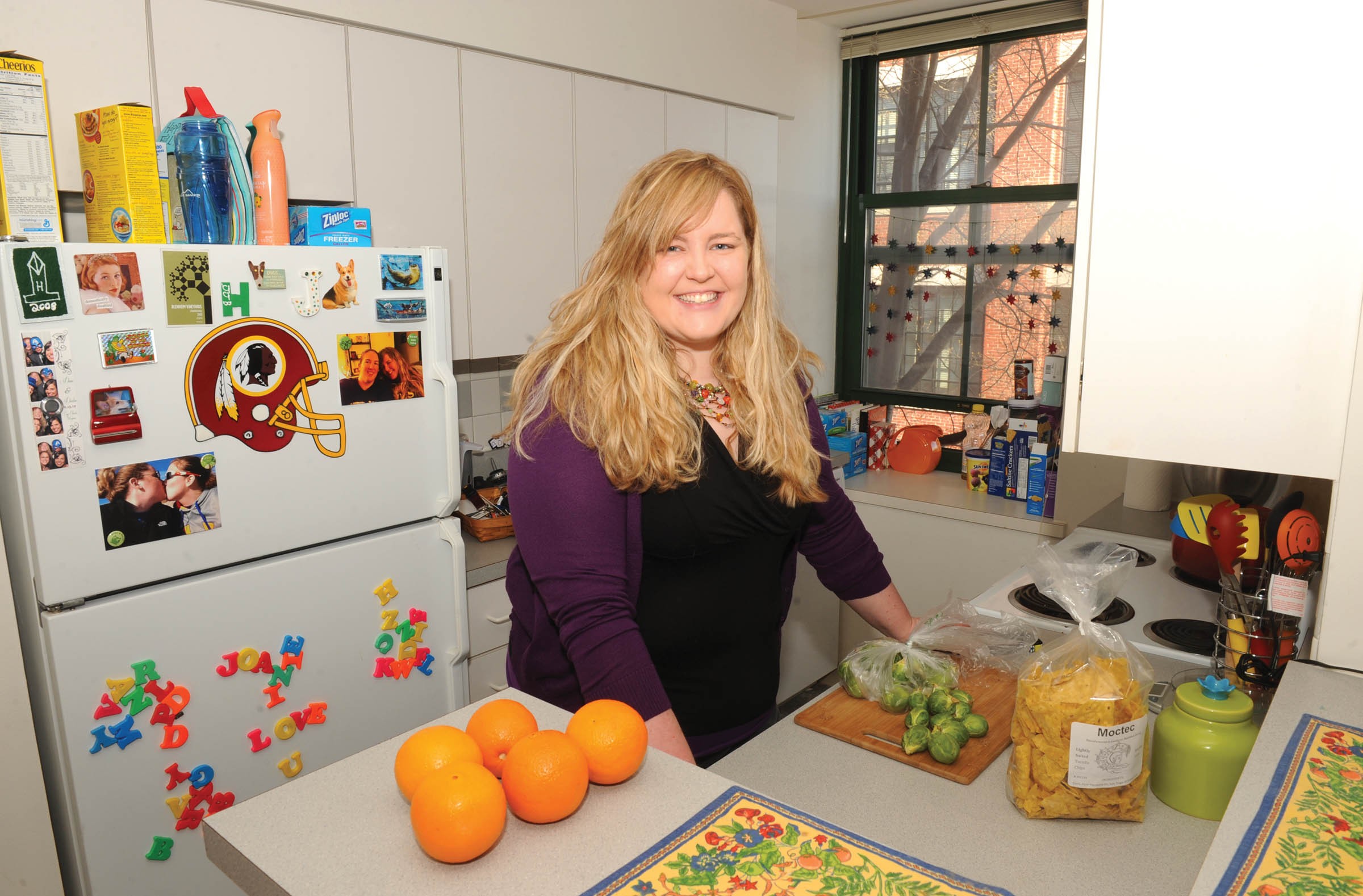 That's how Joanie Burroughs, a lawyer in the Richmond Public Defender's Office, came to find herself buying "pretty much everything" through Relay. When she moved into the River Loft apartments in February 2012, she found a Relay flyer included in her welcome packet.

Not unlike buying that first pair of shoes online, Burroughs acknowledges that there was some trepidation associated with her first order. And there are still some products she won't buy through Relay — for example, shampoo and pet supplies, the latter because she enjoys putting her dogs in the car and taking them to Petco.

But Burroughs says she's list-oriented, plans her meals ahead of time and hates grocery stores. "That's exactly why I like Relay," she says. "It's so much less stressful than going into a grocery store." S