This movie takes a deeper look at what everyone seems to want. 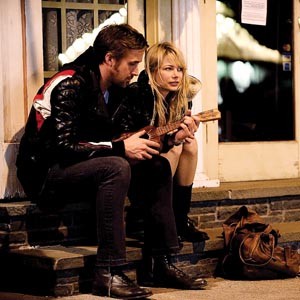 "Blue Valentine” is less a love story than a story about love. Director Derek Cianfrance, who co-wrote the movie, uses a simple, low-budget style — handheld camera, grainy, tight compositions— to shoot the film, but beyond that things get pretty complex.

The movie begins as the story of Dean (Ryan Gosling), a blue-collar worker in the New York area who yearns for a female partner, and when he finds one in Cindy (Michelle Williams), a mousy high-school senior, it becomes the story of Dean and Cindy. We're catapulted several years into the present, where we observe 24 hours, perhaps the last, of the couple's marriage. Dean has less hair and more free time, which he spends on the couple's daughter, Frankie (Faith Wladyka). Cindy is a nurse and is getting fed up with Dean's beer-guzzling and constant joking. Their relationship is on the rocks, and as they try to patch things up with a trip to a romantic hotel, the film keeps going back to their courtship, piecing together a picture of modern love that's alternately charming and devastating.

“Blue Valentine” is derogatorily referred to in certain quarters as a “chick flick.” The movie is inextricably linked in some audiences' minds with “The Notebook.” Both star Gosling opposite a beautiful blonde in a love story about a young man who seems willing to do anything to win the object of his affections. From there the similarities end, however, and not just as stories. “Blue Valentine” doesn't conclude with the happy tears intended by the creators of “The Notebook” — just tears. A friend said she felt like getting up and walking out a few different times because the movie was so raw and difficult to take. That might not be everyone's reaction to the level of realism on display, but it's exceptional enough to be considered one of the film's noteworthy features.

Consider the motivating force of Dean, who confides to a co-worker at a moving company that his dream is to find someone to love. It's a startling admission for a male lead in a film, yet the sentiment feels truer than many a guy might want to admit. We're drawn into the story by such confidences much like one person to another who freely admits their feelings. But Dean's unusual point of view isn't always appreciated. Later he tells Cindy, now his wife, that he doesn't feel like the failure she's making him out to be, just because he doesn't have career goals. He contends that drinking beer at his current job, as a painter, is an example of living the dream. More importantly, he says, he considers his life's work giving love to Cindy and their daughter. It's a compelling idea, but Cindy's not buying it.

Dean is the movie's focus, but Cianfrance has made Cindy, even with her reserved nature, at least as multifaceted, and maybe more difficult to figure out. Williams deserves her best actress nomination for the portrayal, which demands as much as Gosling's even though her character has less to say. There are violent undercurrents in Cindy's background, and what we learn about her has more to do with the direction they take her. Her first boyfriend was a high-school wrestling star (Mike Vogel), a vicious lout who directs his anger over their eventual breakup at Dean. Cindy is charmed by Dean's wit and charisma, but eventually we're made to wonder whether she can ever be happy with someone so laid-back and caring. If girls fall in love with boys who remind them of their fathers, maybe Cindy, her childhood traumas untreated, feels the need for someone abusive.

Part of the appeal of “Blue Valentine” is watching Dean and Cindy get together, but the wreckage their marriage becomes enthralling and the uncertainty of whether they can repair things is equally fascinating. The movie raises a lot of questions about relationships that are neither easy nor pleasant. As stories about love go, this one is a terrible first date movie, but for others it provides a lot to talk about. Is it too easy these days to give up? In a more sentimental tale, the answer would be no. “Blue Valentine” is not that kind of romance. The result is both gratifying and a little scary, a lot like love itself. (R) 114 min. S