The Richmond Symphony looks for its new conductor: early 40s, black tailcoat, quick with a baton. 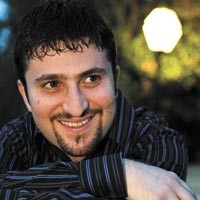 The contestants perform with their backs to the audience. Their talent is evaluated by their ability to get other people to make music. The judges don't make snarky comments for the audience's amusement. You may hear tunes you've heard before, but it's unlikely the performances will make you cringe.

That's the contest the Richmond Symphony is conducting through most of this season and some of the next.

The symphony's hunt for a new music director goes public this weekend, as Mikhail Agrest opens the orchestra's 2008—2009 season, leading three performances in the main-stage Masterworks series, followed by a pair of Kicked Back Classics dates. Five more candidates — Daniel Meyer, Steven Smith, Marc Taddei, Arthur Post and Dorian Wilson — will appear from October to March, each taking on a Masterworks program and an installment of another symphony series. Three more candidates — Alastair Willis, Christian Knapp and Arthur Fagen — will go through comparable auditions early next season.

A conductor search committee, composed of five musicians in the orchestra and five representatives of its administration and board, will decide who will succeed Mark Russell Smith as the symphony's music director. The choice is expected at the end of 2009.

All the candidates have similar rAcsumAcs — prestige-conservatory education, followed by a gig as assistant conductor of a major orchestra or opera company, followed by music directorships of progressively larger ensembles, plus assorted guest-conducting credits. Median age: early 40s. All are American, save for Agrest, a Russian AcmigrAc who divides his time between this country and his native St. Petersburg. Two others direct orchestras overseas — Taddei in New Zealand, Wilson in Serbia — and Fagen recently concluded a five-year stint in Germany.

More similarities come through in the responses of five candidates to an e-mail questionnaire about their approaches to programming, connecting with musicians and audiences and being the public face of a musical institution.

Several, for example, liken selecting works for a concert to devising a menu. “[I]n a restaurant where we've grown to trust the kitchen,” Post writes, “many of us will venture beyond the familiar menu to the evening's specials.” Or, as Agrest puts it, “A program should be a balance of contrasting styles. … the new and old, the known and unknown.”

An orchestra and its conductor should develop a “collegial approach to music making,” Taddei writes. “I listen to what the orchestra offers,” Wilson writes, “and we find our way together.” Agrest seeks “a chamber-music way of making music … musicians listening to each other.”

Smith seems to speak for all in wanting to “break down the invisible curtain that sometimes divides the audience from the orchestra.” All emphasize an orchestra's key role in what Post calls “vibrant culture.”

In culling a list of more than 250 applicants to nine finalists, the search committee's “musicians contacted musicians in the orchestras where these conductors have worked, and the nonmusicians contacted other board members and administrators,” says clarinetist Jared Davis, one of the five symphony players on the panel. He expects to see more overlap and give-and-take in panelists' evaluations as the candidates perform here.

William H. “Tracy” Schwarzschild III, secretary of the symphony board and chairman of the search committee, says he'll rely on its musicians' artistic judgments and that the candidates' musical abilities will be “the critical consideration for all of us.” At the same time, he says, “we will be looking for someone … who can help with fundraising, someone with good communications skills and an ability to develop contacts in the community.”

Public assessments of the candidates will be gathered from questionnaires in concert program books and a comments page on the orchestra's Web site, says David Fisk, the symphony's executive director, also a member of the search committee.

While most conductors have working relationships with more than one orchestra, the winning candidate will be expected to make the Richmond Symphony “his principal gig,” Davis says, “because of the size of this orchestra and the attention it needs. It's right on the cusp of becoming something bigger.” S

The Richmond Symphony launches its 2008—2009 season with Mikhail Agrest conducting Masterworks concerts Friday, Sept. 19, at Second Baptist Church; Saturday, Sept. 20, at First Baptist Church and Monday, Sept. 22, at St. Michael Catholic Church — all beginning at 8 p.m., with preconcert talks at 7. Monday's concert will be broadcast live on WCVE-FM 88.9. Tickets are $20-$50. Call 788-1212 or www.richmondsymphony.com.