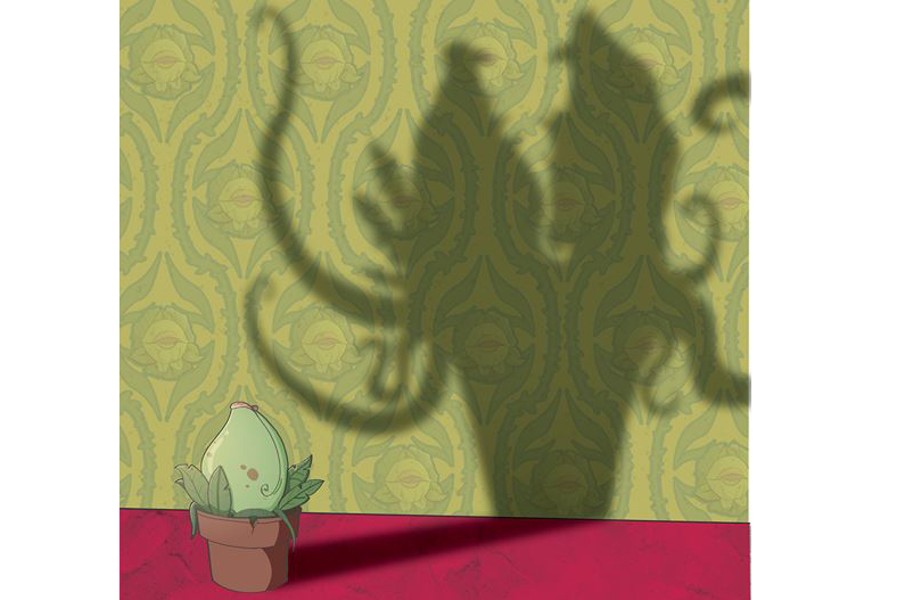 Shot in two days on a leftover set for a tiny budget, there was ample reason to believe the 1960 comedic film “The Little Shop of Horrors” wouldn’t amount to much.

Instead, the Roger Corman movie became a cult classic, and inspired a musical adaptation by composer Alan Menken and writer Howard Ashman. Premiering off-off-Broadway and off-Broadway in 1982, the musical version would become a critical and commercial darling, running for five years and spawning a 1986 film starring Rick Moranis and Ellen Greene.

Beloved for its campy humor, doo-wop and early rock-inspired music and satirical take on B-movies, “Little Shop” is returning yet again, this time to Virginia Commonwealth University’s stage.

For the uninitiated, the musical tells the story of Seymour, a down-on-his-luck young man who’s secretly in love with his co-worker, Audrey. After obtaining a strange plant from outer space that thrives on human blood, Seymour finds that fame and fortune may come at the cost of other’s lives in this amusing Faustian tale.

“It is a fun, energetic, rock ’n’ roll fantasy,” explains Kikau Alvaro, the director and choreographer. “I’ve been describing it as a cautionary tale about what not to do when interacting with alien plants.”

Mitchell Ashe, a sophomore who plays Seymour, first fell in love with the show in high school.

“It’s a story about the human experience and yearning for something,” says Ashe, who plays Seymour in rotation with another actor.

As Seymour shares many of his scenes with a man-eating plant – dubbed Audrey II – a number of Ashe’s scenes feature him performing opposite a puppet.

“It’s amazing to act with something that is bringing you so much emotion strictly through voice,” he says, adding that playing against a puppet isn’t as difficult as it seems.

Madison Hatfield, a senior, was first introduced to the soundtrack by Ashe a couple summers ago.

“I just immediately fell in love and wanted to play Audrey,” says Hatfield, who plays the female lead in rotation with another actress. “It’s a classic. You can’t get these songs out of your head. It’s one of those pieces that sticks with you.”

Asked if she would stick with Audrey’s iconic blowsy voice, Hatfield said she’s leaning into it. “You can’t help but do it a little bit,” she says. “That’s precisely why Ellen Greene did it. It’s just written there.”

Working with a team of puppeteers, grad student Brandon LaReau brings the murderous plant Audrey II to life by singing into a backstage microphone while watching the show on a television set.

“I have to very carefully make sure that what I’m doing matches up with what the puppet’s doing onstage,” LaReau says. “It’s surprising how quickly [the show] moves. You really don’t realize that an hour and a half has passed by before intermission. It goes by lickety-split. It’s shockingly funny.”

Noting that the show was the first collaboration of Menken and Ashman – who would go on to make classic Disney films like “The Little Mermaid,” “Beauty and the Beast” and “Aladdin” – Alvaro says the musical is filled with great songs.

Of the show’s challenges, Alvaro says explaining some of the stylistic references – such as girl groups like the Ronettes or the delicate energy of Fay Wray in “King Kong” – to a group of young performers has proved interesting.

“[The show] falls sort of in its own category, where in order to get the comedy and the pace and the energy, you have to take everything very seriously,” Alvaro says. “It’s much more complex than a simple love story, but much more simple than ‘Hamilton.’”