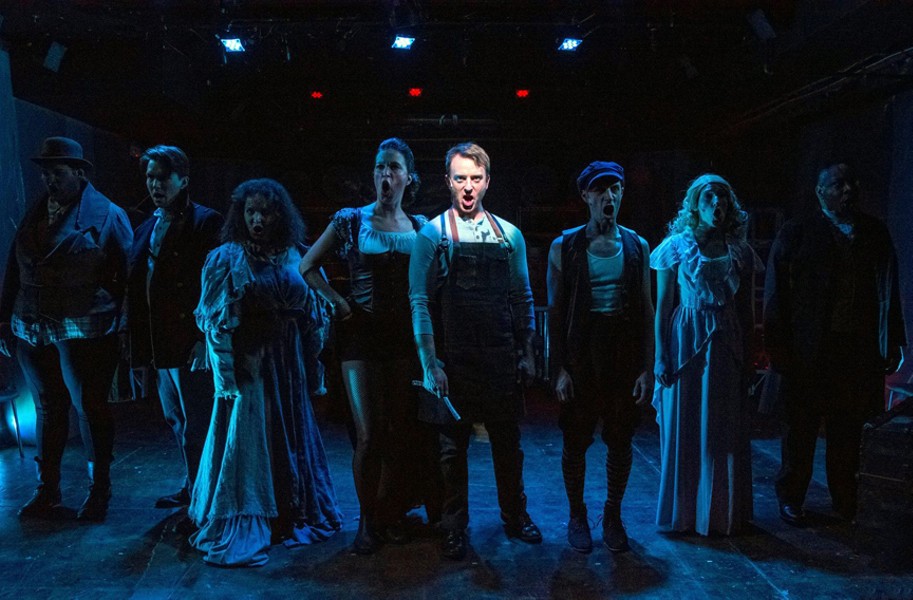 Enter TheatreLab's underground playhouse on Broad Street in the next few weeks and you'll get the feeling that TV serial killer Dexter Morgan would be right at home.

Surrounding the sterile, stainless-steel work table and wire shelving ubiquitous in restaurant kitchens are walls of plastic sheeting. It's the ideal environment for Michael C. Hall's character to dispatch one of his many victims.

But a killer of a different stripe stalks these environs. He's a barber named Sweeney Todd, and he'd like to give you the closest shave of your life.

Taking inspiration from a Victorian-era penny dreadful, "Sweeney Todd: the Demon Barber of Fleet Street" attends the tale of a wronged barber who seeks revenge by slitting the throats of his customers. With music and lyrics by Stephen Sondheim and a book by Hugh Wheeler, "Sweeney" is a deliciously macabre musical of vengeance, violence and unwitting cannibalism.

The year is 1846, and Sweeney Todd (Alexander Sapp) has returned to London from exile to exact revenge on Judge Turpin (William Anderson), the man who raped his wife and banished him to Australia. Upon his homecoming, Sweeney learns that Judge Turpin has taken his daughter Joanna (Mallory Keene) as his ward and plans to marry her.

Visiting the place where he once had his barbershop, Sweeney encounters Mrs. Lovett (Bianca Bryan), owner of an unsuccessful meat pie bakery. Mrs. Lovett quickly recognizes Sweeney, and the two hatch a plan for him to kill his way to the top. In need of meat, Mrs. Lovett offers to dispose of the evidence by baking the victims into her pies.

Where the original 1979 Broadway staging utilized a massive warehouse set of iron beams and moving cranes to emphasize the Industrial Revolution and society's dehumanizing influence, TheatreLab artistic director Deejay Gray has gone a different route, offering a stripped down "Sweeney" that focuses more on its characters and the violence that awaits them.

Gone are the garish makeup and goofier aspects of the show, such as the barbershop trapdoor that shunts the recently killed to the bakery downstairs. In its place is an even more raw and discomfiting show that's so physically close to its audience that the front row may have to worry about blood spatter.

In recent years, Sapp has established himself as one of Richmond's greatest actors, and his Sweeney is no exception. He brings such frightening menace to the role that you may have trouble reminding yourself that this is the same actor who charmed the pants off audiences in last season's "The Last Five Years." As easily as his character flips open a straight-edge razor, Sapp can suddenly change his motivation and demeanor, done to humorous effect in "By the Sea."

As the Beggar Woman, rival barber Pirelli and other roles, Audra Honaker has twisted her normal quirkiness to more devilish purposes. She handles Sondheim's difficult vocal parts as easy as breathing, and her Pirelli seems worthy of his own musical.

In line with Gray's austere envisioning, the singers are minimally supported by piano and violin instead of a full orchestra. The choice puts greater emphasis on the vocals of Sondheim's Bernard Herrmann-inflected score, used to explosive effect under John-Stuart Fauquet's music direction. Joey Luck's sound design is also a marvel; through micing his actors, balancing the vocals and adding an occasional dash of reverb, we get an astonishingly clear mix even in the echo-prone brick walls of a basement theater.

Ruth Hedberg's costumes delightfully blend period with a dash of sadomasochism, a choice that underlines Sapp and Bryan's interpretation of the roles. Michael Jarett's lighting heightens the show's overall effect, but some of the actors occasionally missed their exact marks on opening, spotlighting their faces only partially.

Pulling together all aspects of this minimalist take on "Sweeney," Gray's direction is superbly conceived and executed, deliciously dark while still leaving room for humor.

It's a testament to Sondheim that even in this stripped down telling, flying without an orchestra and with the mere suggestion of a set, that this "Sweeney Todd" is so deeply unsettling 40 years on.