TheatreVirginia tells a compelling story with skilled direction by Ambush. 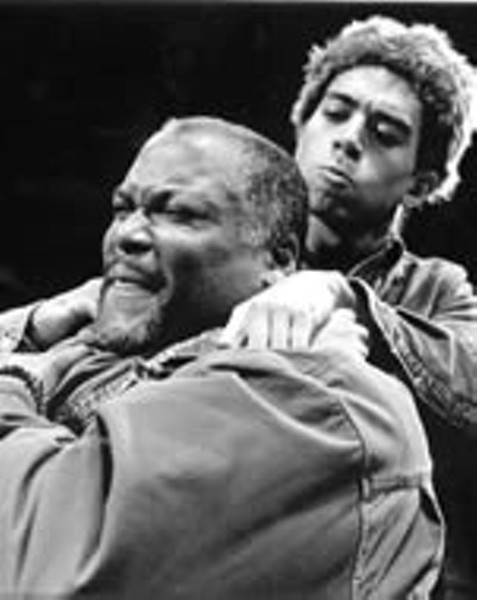 But early in TheatreVirginia's production, I realized that the script associated with the 1985 world premiere had been extensively revised. At some point, the playwright had gone back to the script and improved it. He had swept away logical inconsistencies in the plot and reinforced the emotional backbone of the story. On several occasions, I girded myself for a clunky line of dialogue only to find that the line had been excised or replaced with something far more intriguing.

The story is simple but compelling. Ty Fletcher (Raphael Nash Thompson) teaches classics at a New Jersey prep school. He gets up in the middle of the night to investigate a disturbance in his barn and discovers Hector (Daniel Gonzalez), a runaway teenager with a knife, a rapid fire mouth and an endless stream of excuses.

With considerable comedic timing, Gonzalez successfully portrays Hector as an unformed personality with traces of latent potential. The play deliberately asks whether it's worthwhile to extend second and third chances to someone like Hector.

Despite evidence that Hector may be irredeemable, Ty allows him to stay on the farm. Thompson's imposing physical presence and gentle manner is an interesting visual contrast to Gonzalez's leanness and agitated physicality.

In Thompson's performance, we recognize the kindness in Ty. But as he struggles to teach Hector about conscience and self-discipline, we also discover that his lessons have origins beyond undiluted charity. When he rants about the lack of gratitude from his students through the years, it's possible to ask whether his altruism is tinged with egotism. The ease with which he lies to his wife and his fascination with Hector's descriptions of urban violence hint at some of the animalistic tendencies that exist in all of our psyches.

As Ty's wife, Georgiane, Joyce Lee is a voice of cool reason. Hector immediately derisively refers to her as "FBI." She worries about Ty's job, paying the bills and getting along with the neighbors. But Mastrosimone never ridicules these things as superficial or unimportant. In Lee's nicely tuned performance, we discover that Georgiane is not only rational but capable of genuine warmness, as well.

In many ways, this play is about words. Ty wants to empower Hector by teaching him to read. Hector demonstrates that there is poetry even in the language of the street. And, most importantly, words can represent values. It is in these moments of the play that the director, Benny Sato Ambush, again demonstrates his facility for finding unexpected rhythms in the intersection of dialogue and physical movement.

Richard Crowell's beautiful set combines the lightly varnished woods of the Fletcher kitchen with the more worn timbers of their barn. It is constructed just a little more downstage than usual. This not only creates more intimacy with the audience but allows the use of deep backdrops that place the play within a more surreal, pastoral context. The occasional sound effect and William T. Grant III's graceful lighting design contribute to this otherworldly tone.

Despite the revisions, the script is not perfect. There is a whiff of manipulation deep in the second act when Georgiane, without any previous or subsequent connections to the plot, suddenly becomes emotional about not yet having a child. The back story about Ty's brother is awkward and unnecessary. And Ty's speeches about teaching are occasionally longwinded.

In Wednesday's preview, the ending was undermined slightly by the final seconds. The characters should be wiped out by the events of the emotionally charged final scenes. Instead, they seemed more lighthearted than expected. But this one blip did little to detract from a superb production of Mastrosimone's story and his distinctive voice. S