theater: Top of the World

A former Richmonder contemplates the view from Broadway. 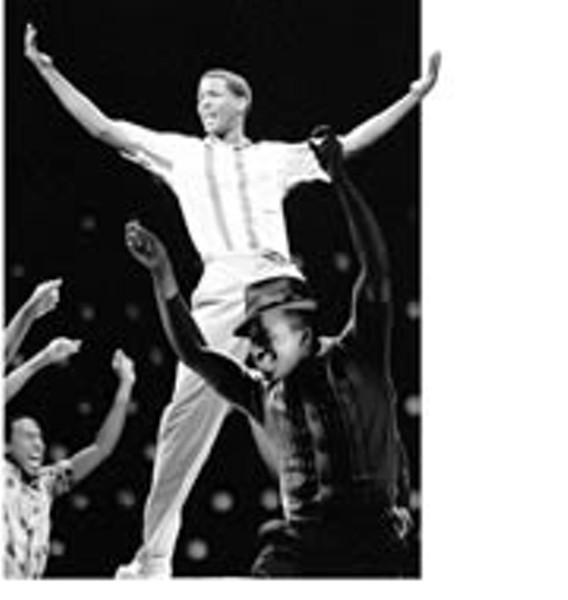 Not as nice as getting the part. Being a lead in a top Broadway show has less tangible, but arguably more beneficial perks than free James Brown tickets. For one thing, you get to meet some interesting people. After one particular show, Philadelphia 76ers coach Larry Brown demanded to meet Reynolds and invited him to a Philly game where he got to sing the national anthem and meet Michael Jordan. (The Washington Wizards were visiting.)

Reynolds has also met lots of film stars like George Lucas, Nicole Kidman and Mike Myers, and he's even met Chelsea Clinton. Not all of these close encounters have been of the handshake and snapshot kind. Reynolds has made some important contacts, and he can't help but mention the "two nice and promising conversations with Steven Spielberg." About what, exactly, is under wraps at the moment. All that matters right now to the unabashedly enthusiastic Reynolds is the moment. "We're the king of the mountain here on Broadway," he says, "and the view is great."

"Hairspray" is what they call a runaway smash. Based on the movie by John Waters, it sold $2 million advance tickets on opening day and has racked up $28 million in ticket sales to date. It's second only to "The Lion King" in advance ticket sales, its soundtrack has been nominated for a Grammy and it's running indefinitely.

To be a part of all this, and a major part at that, seems fitting to a guy who remembers his Manchester High School chorus teacher telling him to his face his junior year that he didn't have solo talent. In "Hairspray," the easygoing and witty 28 year old sings and dances as Seaweed, "the coolest black kid at the school," Reynolds says, who teaches protagonist Tracy Turnblad all the latest dance steps. Of that memorable high school confrontation years ago, he says, "I take what he said and replay it in my head every night as 1,400 people cheer for me."

Reynolds emancipated himself at age 16. Though his home life was decent enough — he was raised by a supportive single mother after his father died when Reynolds was an infant — he simply craved the challenges of being on his own. After high school, his first big role came at King's Dominion the year before it was acquired by Paramount. His next step was touring the country in productions like "Parade" and "Smokey Joe's Cafe." In 1999 he moved to New York to begin the daunting task of getting his name out and getting parts.

The parts he got would invariably be as a member of the pit singers, a backing chorus that performs from an offstage room. When he auditioned for "Hairspray" in 2000 he won a part as an ensemble member. Though not a principal role, it was a step up, and got him on stage in front of the eyes and ears of important people.

In the middle of "Hairspray's" readings, a time when roles are being studied and potential backers are nosing around to inspect the goods, writer Shaiman called him at home one day and said, you know, "I don't know why you're not playing Seaweed."

"Dude," Reynolds remembers responding, "I don't know why I'm not playing Seaweed." Shaiman subsequently offered him the part and the only thing left for Reynolds to say was, "Uh, yeah. Hell yeah."

The way it happened for him — "I just sang my heart out from the back row and they heard me and gave me an opportunity" — proved something to Reynolds he had always hoped was true. "You don't have to be the one straight out the gate," he says. "You can climb up the ladder. All you have to do is keep doing your best. The opportunity will come. It's not even an opinion. I know that in my heart to be true." S