The Barksdale's "The Crucible" shines with understated lessons of human nature. 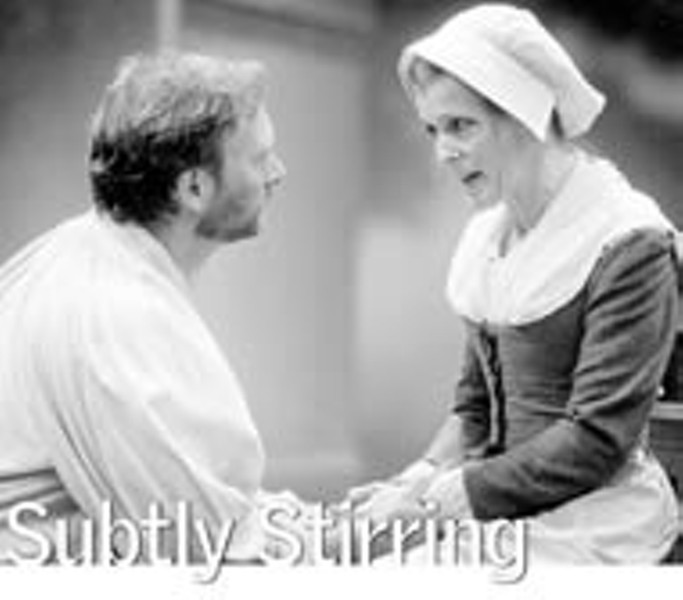 Within the first five minutes of Arthur Miller's classic play, the Rev. Samuel Parris (Matthew Costello) questions his niece about conjuring with witches and the possible connection to his sick child. Denying everything but dancing in the forest, Abigail Williams (Amy Barrett) sets an icy gaze over the audience and her evil presence is chilling. The audience is hooked and holds on for dear life for the next three hours of the production.

Under the direction of Bruce Miller, a diverse cast of 19 plays out the riveting drama based on the actual 17th-century witch trials of Salem, Mass. "The Crucible" is more than a lesson in history, however. It holds a mirror to the face of human nature when the accused is backed up against a wall.

Arthur Miller, long interested in the historical account of the witch trials, found the impetus to write the play in the McCarthy era when the House Committee on UnAmerican Activities probed the private lives of some of his friends. Then, just as the citizens of Salem were forced (under penalty of death) to name names of those who practiced witchcraft, many celebrities were coerced into naming names of communist sympathizers or face losing their livelihoods. Miller, both fascinated and appalled at the similarities of the committee hearings and the witch trials, launched "The Crucible" in New York City in 1953.

David Bridgewater offers a powerful interpretation of the tormented John Proctor whose wife is charged with witchcraft. He exemplifies the strong, good man brought down by the bewitching Abigail. Jack Parrish plays the overbearing Deputy Gov. Danforth, and overbearing he is, taking perverse pleasure in his power. Audra Honaker is totally credible as the frightened young Mary Warren.

The real star of this production is "subtlety," skillfully displayed by Kelly Kennedy. Subtlety, that simple understated state of being, takes mastery to achieve and Kennedy does it well, particularly in a play immersed in mass hysteria. Her performance as Proctor's wife is unforgettable. We see her play the injured wife who summons a remarkable inner strength to stand against the evil in her world.

Steven Koehler, Tim McMath and Jason A. Bishop make up the design team and deserve kudos for their subtle lighting, set and costume design, respectively. Their contributions are a convincing escort into the Puritan period.

The fact that "The Crucible" continues to appeal to audiences after 50 years is a testament that the drama parallels periods in history when whole communities are caught up in the histrionics of accusations, real or imagined. The revival of this production, makes us wonder if director Bruce Miller is once again deliberately holding up a timely mirror to the face of all Americans. S