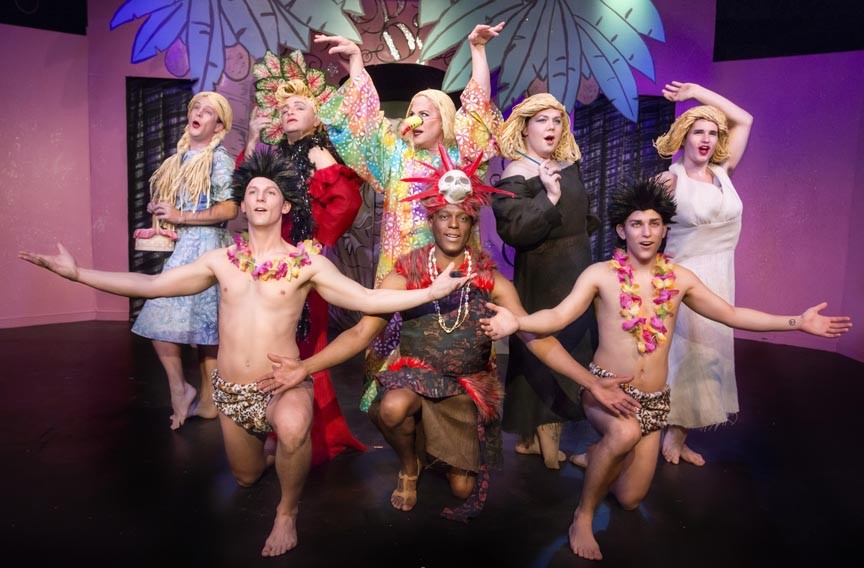 The kooky, campy musical "Howard Crabtree's Whoop-Dee-Doo" is fun and free-wheeling enough that you can almost overlook its deficiencies. Almost. Unfortunately, the main problem with the latest Richmond Triangle Players' production involves the vocal ability of key cast members, a deficiency difficult to hide even amidst Thomas W. Hammond's over-the-top costumes and an entertaining collection of funny songs.

The meta-musical tells the tale of designer Howard Crabtree (played with boyish enthusiasm by Brian Baez) and his desire to put on a musical revue incorporating some of his flamboyant costumes. Every time he gets hopeful, he's undercut by Tim Goad, who plays Eeyore to Crabtree's Winnie the Pooh, complaining about everything from the silliness of the sketches to the substandard dressing rooms.

And some of the sketches indeed are silly — a nose sings a love song to a box of Kleenex, for instance. But others show a surprising depth and a subversive slyness. Dan Stackhouse infuses "Last One Picked," a bittersweet reminiscence of youthful ball-field deficiencies, with a winning sincerity. The genteel "It's a Perfect Day (for an Outing)" underplays its social and sexual subtext to great effect. And just to make sure your mind doesn't wander, cute half-naked boys pop up at regular intervals.

The charming Baez propels the show along gracefully with his infectious smile and a bright, clear singing voice that makes each of his numbers a winner. There are other powerhouse singers in the cast — Matt Beyer cuts a Sinatra-esque figure in "Blue Flame," and Daniel Cimo has the pipes to emulate Judy Garland in "The Magic of Me." But others in director John Knapp's ensemble don't quite have the vocal oomph to carry a solo. As funny as Goad is in his comic conflicts with Crabtree, he has trouble staying on a song's melody, an unfortunate distraction. And he isn't the only singer who wavers at times.

Written in the early 1990s, the show often seems dated with a long sketch devoted to the unauthorized-musical version of Nancy Reagan's life that will fly over the heads of anyone younger than 35. And while Kyle Cornell delivers a comically earnest tribute to Elizabeth Taylor, it's at least a year too late.

While the production falls short on auditory delights, it's consistently visually engaging, with Knapp effectively moving the action around the stage. Hammond provides an appropriately ramshackle set, accentuated by David White's straightforward lighting design. But it's his costumes that are the real stars, particularly his innovative showcase-on-a-shoestring that ends the evening on a festive note. S