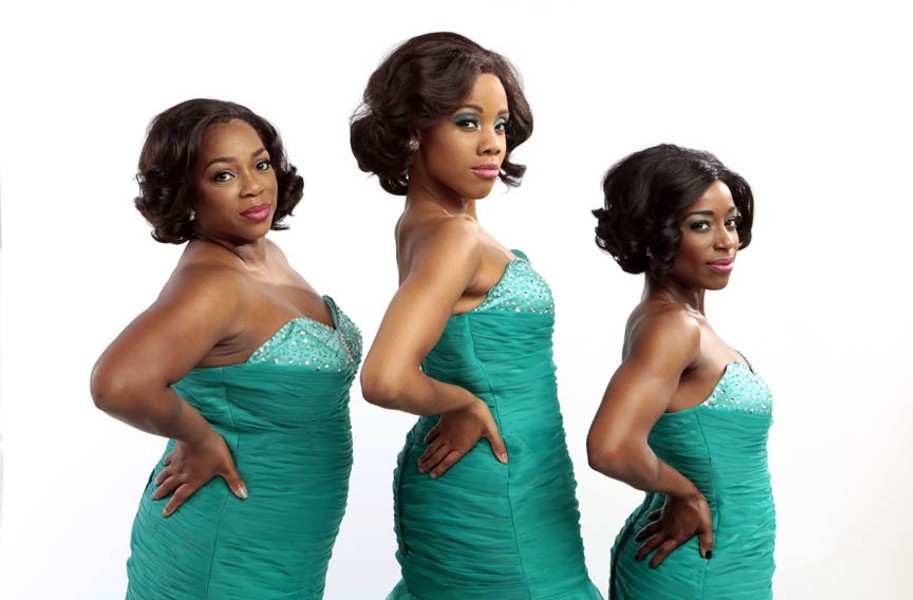 In the simplest terms, that’s what this production will do. The music soars, the performances are spot-on, and the dazzling technical elements create beautiful stage pictures that will stick in your memory long after you leave the theater.

Set in the 1960s and ’70s when black performers were crossing over from R&B to pop stardom, “Dreamgirls” is a show of big moments: sonic crescendos, intense interpersonal conflicts and several ripe scenery-chewing opportunities.

Director Chase Kniffen has assembled an all-star cast that can deliver the script’s signature scenes with impressive gusto and Broadway-caliber flair. Some of the connective tissue between highlights is a little rough on opening night but, for those beguiled by big moments, the hiccups won’t even register.

The most delightful surprise in the cast is D. Jerome Wells, who plays soul music phenom and notorious womanizer Jimmy “Thunder” Early with infectious energy and undeniable charisma. Early gives the naive girl group, the Dreamettes, its first big break, hiring the starry eyed youngsters as backup singers for his national tour thanks to a hard-sell pitch from Curtis Taylor (Jerold Solomon), a car salesman who takes on management of the group as his ticket to make it big in showbiz.

So begins the education and, in some cases exploitation, of the Dreamettes, who soon split off on their own as a group very much like the real-life Supremes called the Dreams. Jimmy seduces the innocent Lorrell (Felicia Curry) while Effie (Desiree Roots) falls for Curtis. When Curtis elevates Deena (Zuri Washington) to lead singer over Effie, replacing her both on stage and in his bed, the fragile faux-family dynamics explode into disillusion and discord.

Roots is made for this part, her Effie White an undeniable diva with a vulnerable heart and an enchanting voice. When Kniffen places her center stage and lighting designer Joe Doran bathes her in sumptuous rock-star lighting, the effect is dazzling.

The other “girls” are no slouches either. The diminutive Curry slowly builds Lorrell’s self-esteem until her dramatic second-act confrontation with Jimmy, “Ain’t No Party.” Washington’s Deena also develops impressively during the nearly three-hour show, convincingly stepping up from pretty wallflower to determined superstar. Playing Michelle, a late addition to the group, Katrinah Carol Lewis adds both sass and warmth to the mix.

While this is a female-forward show, the men do their best to impress. Durron Tyre plays Effie’s brother, C.C., with his heart on his sleeve -- his first act “Family” is a standout. Jerold Solomon’s Curtis uses his full-bodied voice to command the stage but effectively tones it down to sweet-talk Deena with “You Are My Dream.”

Kniffen pushes the pace to the point that some transitions seem a bit out-of-control, but the result is an unfailingly entertaining production sure to sweep up large swaths of Richmond in its flashy fervor this summer.

“Dreamgirls” runs at Virginia Repertory’s November Theatre through Aug. 7. Tickets and information are available at va-rep.org.