This big summer musical is artistically excellent but culturally clumsy. 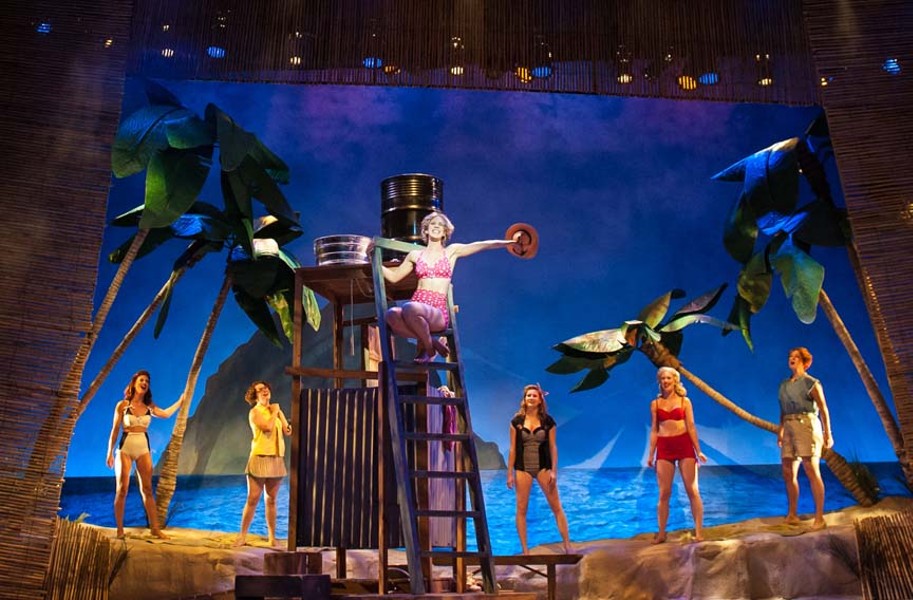 It’s easy to extol the artistic merits of “South Pacific,” the latest blockbuster musical lighting up Virginia Repertory Theatre’s downtown main stage this summer. The cast is rich with talent, the music is both fantastic and familiar, and the technical elements — lights, costumes, set and sound — are top-notch. The lead actors deliver fine performances and the couple at the show’s center share a palpable romantic chemistry.

But we’re living in politically charged times, with issues around race and gender dominating the cultural conversation. In theory, staging a Rodgers and Hammerstein classic that took a bold stand against racism back in 1949 would seem to make sense. But in practice, “South Pacific” unfolds as an uncomfortable reminder of how meek that heroic step feels today.

The story is set on a naval installation in the Pacific islands during World War II and there are two prominent Asian characters. First is Bloody Mary, the enterprising Tonkinese merchant who sells tchotchkes to American naval builders, known as Seabees. As played by Amy Jo Phillips, Mary is sassy, headstrong and entertaining, but also skirts along the edge of demeaning stereotypes. Even more problematic is the character of her daughter, Liat (Yui Matsuzaki), who ends up in love with a newly arrived Marine, Lt. Joe Cable (Matt Zimmerman). As if being given away as a plaything by her mother isn’t squirm-worthy enough, the character never says a word despite her importance to the plot.

Liat and Cable’s love affair takes a back seat to the one between Navy nurse Nellie Forbush (Stacey Cabaj) and French plantation owner Emile de Becque (Branch Fields). A fun-loving Southern girl, Nellie falls for the middle-aged de Becque until his politics are called into question by the local Navy brass, a complication that prompts her melodic assertion, “I’m Gonna Wash That Man Right Outa My Hair.” After de Becque passes muster with the Navy, their romantic pathway seems clear until Nellie discovers he has mixed-race children from his first marriage to a dark-skinned Polynesian woman.

The reason for Cable’s arrival at the base, a dangerous spy mission behind enemy lines, propels the action, adding gravitas but also humor as it eventually ensnares opportunistic comic relief character sailor Luther Billis (James Stover).

Director Chase Kniffen does an exceptional job keeping the story moving, and music director Sandy Dacus, working with a 10-piece orchestra, delivers sumptuous-sounding melodies like the recurring “Some Enchanted Evening.” Fields is impossibly charming as de Becque and he and Zimmerman command the stage with powerful voices and impressive biceps. As she was in her previous Virginia Rep productions “The Sound of Music” and “My Fair Lady,” Cabaj is simply captivating.

The production generally works well but cannot escape the dated tropes and awkward subtext. The show utterly fails the Bechdel test, with Bloody Mary and Nellie the only female characters with significant dialogue. In a story focused on race, the anachronistic appearance of a black officer late in the show is a head scratcher.

Plenty of patrons will get lost in “South Pacific’s” artistic opulence but many others will feel the uncomfortable tug of its contemporary cultural clumsiness. S

Editor's note: This story reflects a misspelling from the print edition to Richard Rodgers.