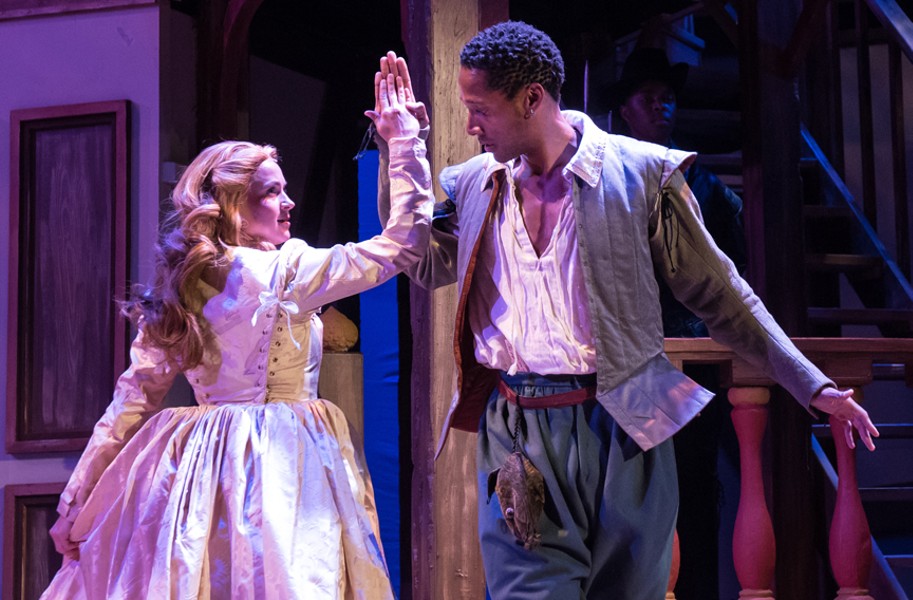 In the years since “Shakespeare in Love” hit movie theaters in 1998, the controversies generated by the Oscars that followed — the film beating “Saving Private Ryan” for best picture, Judi Dench winning best supporting actress for only eight minutes of screen time – made it easy to forget the delightful, complex story the movie tells.

In the stage adaptation currently running at Virginia Repertory Theatre, that story gets a satisfying restoration in an elegantly staged production, full of humor alternately broad and pithy with fine performances by both leading and supporting players. Sure, it takes a while for the momentum to kick in and there is at least one major misstep, but the preponderance of winning scenes ultimately makes the show impossible to resist.

The play is set in the competitive theater world of 16th century England where an implausibly dashing Will Shakespeare (played by Brandon Carter) is suffering from debilitating writer’s block while trying to craft a comedy tentatively titled “Romeo and Ethel, the Pirate’s Daughter.” His strapped financier, Henslowe (Keith Richards), starts assembling a cast for rehearsals before nary a page is written and Viola De Lesseps (Betsy Struxness), the theater-obsessed daughter of a wealthy merchant, wins a part as Romeo by dressing as a man.

Will follows the young “actor” home, sneaking into a party where he spies Viola in courtly dress and is instantly smitten. Unfortunately, it happens to be a betrothal party during which Viola agrees to marry snotty noble Lord Wessex (Joseph Bromfield). Will has found his muse, however, and his star-crossed love for Viola inspires him to ultimately create the masterpiece “Romeo and Juliet.”

But before the curtain falls, hijinks aplenty unfold. Matthew Radford Davies and Scott Wichmann play rival leading actors of the day, each reveling in the prime opportunity to vehemently chew the scenery. Bromfield is both hilarious and malevolent as the foppish Wessex, and Susan Sanford matches Judi Dench with her regal, slyly insightful take on Queen Elizabeth.

These performances make for much broad hilarity, yet some of the play’s best moments are less flashy ones. Shravan Amin charms as Christopher “Kit” Marlowe, trusted counselor to Will in matters both literary and romantic. An adorable Nate Ritsema plays Juliet in the play-within-a-play’s rehearsals and his reaction to a play-acted kiss from Will is almost worth the price of admission.

Less successful, and ultimately downright irritating, is a recurring bit involving Levi Meerovich as a wannabe actor with a crippling stutter. Stuttering is simply not that funny and either Lee Hall who adapted the screenplay or director Jen Wineman could have done something — anything — to trim those awkward interludes.

Otherwise, Wineman, who also choreographed the production, makes some fine choices, using the monumental turntable set designed Ron Keller to block wonderfully dynamic action. The final performance of Will’s play has the turntable slowly spinning as actors weave and cross amongst its timbers in the nearest approximation of cinematic Steadicam work I’ve ever seen on stage.

Of course, every love story eventually boils down to the lovers at the story’s heart, and Carter and Struxness have a playful frisson animating their rambunctious courtship. Carter’s Will is a rogue but a kind-hearted one. As Viola, Struxness embodies intelligence, determination and passion. As with Romeo and Juliet, their love burns hot but quick, catching up the audience in its highly entertaining intensity. S