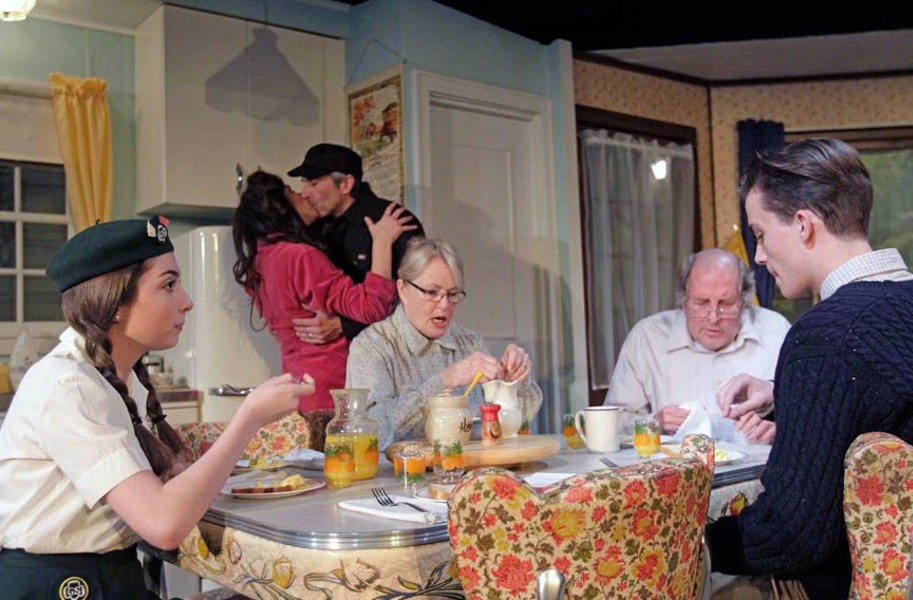 Israel Horovitz’s “Unexpected Tenderness” is a blunt and brutal play that explores issues around domestic abuse with unflinching and unironic directness.

For those unaware of how insidious and incapacitating the abuser and enabler relationship can be to a whole family system, this drama — staged in workmanlike fashion in a co-production by 5th Wall and Chamberlayne Actors theater companies — may serve as a stark wake-up call and a fascinating character study.

But since Horovitz’s play premiered in 1994, the topic has been explicated dozens of times in more nuanced and analytical ways. Just a few years after “Tenderness” debuted, Paula Vogel’s “How I Learned to Drive” painted a complex portrait of an abusive relationship that unravels in scenes that are subtly sinister. Horovitz’s scenes are as straightforward as a slap in the face, resulting in a didactic experience reinforcing a simple message (“Abuse is bad”) instead of an illuminating one.

The family members under siege in this story are the Sterns of Gloucester, Massachusetts, in the mid-1950s. Truck driver dad, Archie (Fred Iacovo), is gruff and demanding in a way that could be endearing if it wasn’t quickly made clear that he suffers from paranoid delusions. He leaves his home to go to work, only to circle back many times a day to try to catch his pretty wife, Molly (Eva DeVirgilis), in imaginary trysts or to disrupt nonexistent flirtations of his 13-year-old daughter (Tori Eriavez).

The proceedings are narrated by Archie’s son, Roddy (Nick Dauley), the only family member who physically strikes back at his father. He pays an immediate price for these transgressions but ultimately receives the gift of insight into the hereditary nature of the problem. Archie’s elderly parents, Jacob and Haddie (William Blair and Linda Beringer), live with the family and serve to tether Archie to some semblance of normalcy. When that tether is removed in the second act and Archie’s anger is poked by his co-worker, the salacious Willie (Dean Knight), the results explode the family in not particularly surprising ways.

Director Bill Patton has cast fine actors who can handle the intensity, but he does little to modulate the humorless tone of the play. Also credited as fight choreographer, Patton’s blocking is often clumsy, the impact of several conflicts lessened by the obvious lack of contact. The lighting design by K. Jenna Ferree is used to delineate moments of narration from the rest of the action and sometimes doesn’t fully succeed. When bruise makeup is called for, it’s unconvincing.

Patton does create a few standout scenes. An extended sequence of Roddy riding in Archie’s truck allows both Iacovo and Dauley to settle into their characters’ relationship and achieve an awkward authenticity, assisted by a full-size onstage truck cab created by set designer Eric Kinder. Blair and Beringer both share small, poignant moments with Dauley while communicating the full extent of the abuse inherent in the Stern family. The play’s Acts of Faith tie-in — the Sterns are Jewish — adds an interesting twist to a couple of situations but never feels essential or fully integrated.

Iacovo gives a glimpse of something deeper going on with Archie, and both he and DeVirgilis have done great things with better material. But in “Tenderness,” a relationship that can be a delicate dance is presented like a very one-sided boxing match, and there’s little joy in seeing such a battle play out. S

“Unexpected Tenderness,” co-produced by 5th Wall and Chamberlayne Actors theaters, plays through Feb. 13 at 319 N. Wilkinson Road. Go to cattheatre.com or 5thwalltheatre.org for tickets and information.