Theater Review: Triangle Players' "The Boy From Oz" Wants to Be Remembered as a Party 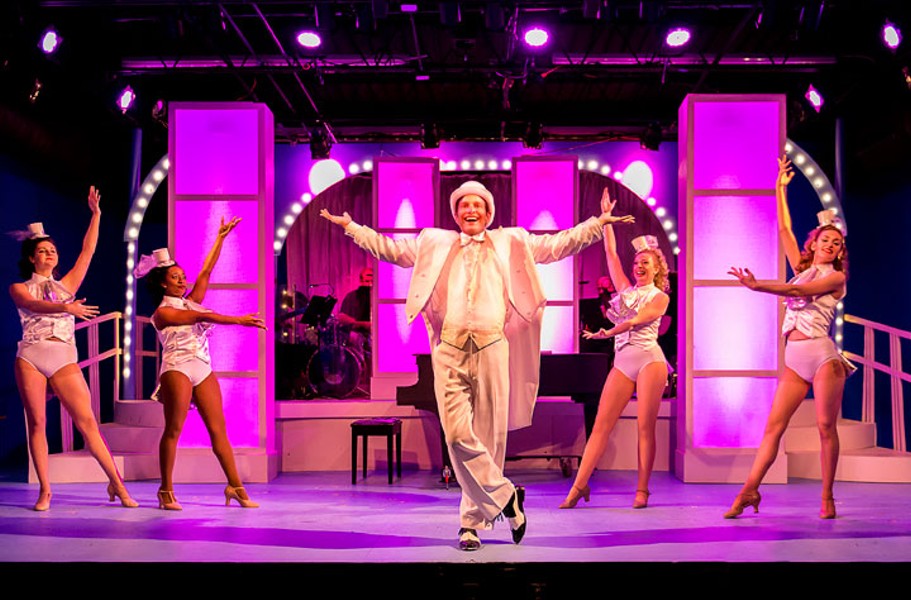 "The Boy From Oz," based on the life of Australian singer Peter Allen, runs through July 16 at Richmond Triangle Players.

I have a confession to make: I didn’t know much about Peter Allen before seeing Richmond Triangle Players’ latest offering.

Judging from “The Boy From Oz,” Allen didn’t want you to either. He’d rather be remembered for his upbeat personality and flair as a performer. “Oz” only gives you glimpses of the man and his feelings, from his upbringing in small-town Australia and long road to fame to his eventual death from AIDS-related throat cancer in 1992.

That’s not to say it isn’t a rollicking good time. In fact, it’s a downright party, with Liza Minnelli, Judy Garland and the Rockettes as guests.

As Allen, Chris Hester shows the full year of prep work that went into the role. He hits every note, his Australian accent is perfect, and he has all of director and choreographer Justin Amellio’s footwork down. After a quick song, the show flashes back to Allen’s hometown of Tenterfield, Australia. Brandon McKinney (in rotation with Dylan Stukenberg) plays a younger version of Allen, impressing in his performance of “When I Get My Name in Lights.”

As a young man, Allen forms a brother act and plays television and road gigs, but both he and the show get catapulted forward by the appearance of Garland in his life. Reprising her role from Swift Creek Mill Theatre’s “Beyond the Rainbow” last season, Grey Garrett again commands the stage while bedecked in sequins. Garrett is as much a force of nature in the role as the iconic woman she portrays, and you get a sense of both Garland’s charisma and the train wreck she could be.

Also a dead ringer in looks and voice is Anna Grey Hogan as Garland’s daughter, Minnelli. You pity her as the daughter just outside of the spotlight -- that is, until she comes into her own with the number, “She Loves to Hear the Music,” co-written by Allen.

After Allen and Minnelli’s marriage falls apart, he goes it alone, morphing from opening terrible nightclub acts to winning an Oscar, playing the Copa, Carnegie Hall and having a string of hits. He also loses his longtime partner, Greg Connell, to AIDS, before he too falls prey to the disease.

Amellio’s direction is fun, but has trouble enacting the more dramatic moments offered by Martin Sherman’s uneven book. The musical direction of Kim Fox, who conducts a five-piece band, works flawlessly together with Joey Luck’s sound design. D. Mark Souza’s numerous costumes are festive and fit the period, while Michael Jarrett’s lighting wows in such numbers as “I Go to Rio.”

Like many a musical, “Oz” is lax on character development and relationships between characters, but again, it seems to fit the man himself. He is, after all, the performer who co-wrote a song with the line, “Don’t cry out loud, just keep it inside and learn how to hide your feelings.”

Instead, the show turns to Allen’s mother, Marion, for its dramatic heft, and Triangle has wisely cast Jeanie Rule. Serving in a similar capacity to her role in Triangle’s “Cabaret” two years ago, Rule nails it, and her rendition of “Don’t Cry Out Loud” serves as the most emotional point of the evening.

Like its subject, “Oz” wants to be remembered more as a party than anything else, and in its closing number, “I Go to Rio,” it certainly is.