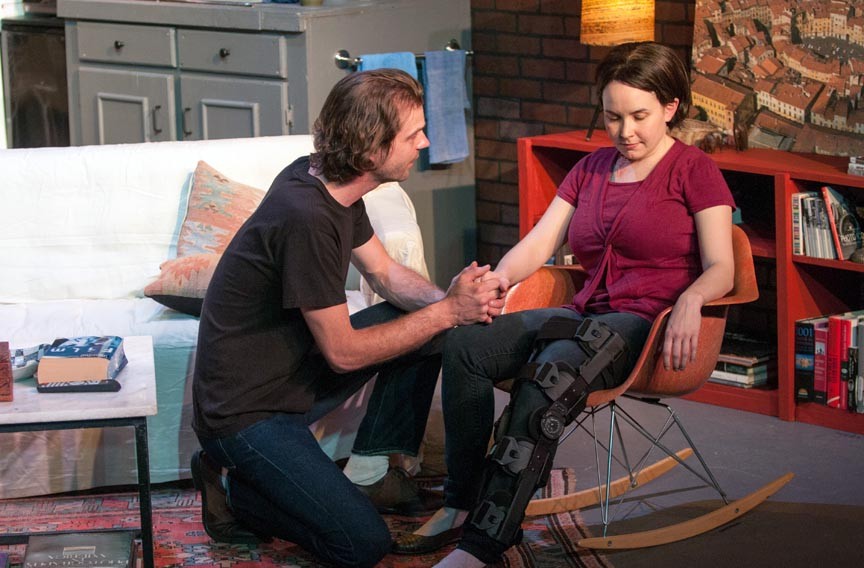 Give the Firehouse Theatre credit for bringing something as ripped-from-the-headlines relevant as "Time Stands Still" to Richmond. While both the play and the production have a couple of distracting drawbacks, playwright Donald Margulies does an admirable job of creating an intensely personal drama out of the impersonal muddle that the Iraq war represented for most Americans.

The show tracks the relationship between a war photographer, Sarah (Audra Honaker), and her journalist partner, James (Charley Raintree), in the aftermath of Sarah's near-death experience at the hands of a roadside bomb. While her scars are physical, his are emotional, the result of witnessing unspeakable carnage way too closely. They try to build a normal life together in their Brooklyn loft — a fine set design by Edwin Slipek (full disclosure, he is Style Weekly's senior contributing editor) — encouraged in this pursuit by Sarah's aging editor, Richard (Ford Flanagan), who's found a new lease on life thanks to hooking up with a spunky girlfriend (Aly Wepplo) young enough to be his daughter.

While James seems ready to settle down, Sarah clearly isn't the settling-down type: "What happens tomorrow?" is one of the first things we hear her say as her compulsion to keep moving threatens to leave James behind.

For a story with so much post-traumatic tension involved, the pace meanders a bit under Tawnya Pettiford-Wates's direction. She's cast two lead actors who are too young for their roles, making their characters' disdain for Richard's "embryonic" girlfriend ring false (in the 2010 Broadway production, Sarah was played by Laura Linney, who has at least a decade on Honaker). Raintree's James also is indistinct, largely because playwright Margulies makes a muddle of this character. In one scene James stridently proclaims that the stories he writes are important because "lives are at stake," but in the next he questions whether Sarah's pictures can ever really make a difference.

Given these issues, it's remarkable that the production is as compelling as it is. As he showed in his Pulitzer Prize-winning "Dinner With Friends," Margulies remains an acute observer of interpersonal dynamics, most obvious here in one character's discovery of another's infidelity thanks to the most subtle clues. Honaker gives Sarah depth as well as strength, the character's combative brittleness tempered by the genuine despair Honaker layers into some of her line readings.

Wepplo finds resonance in a character who could be played just for comic relief, and Flanagan expertly traverses large emotional ranges in his relatively brief stage time — nervously navigating the awkward introduction of his new girlfriend and then angrily defending his professional ethics in a later scene.

Holly Sullivan's costumes don't exactly enhance the characters — I wasn't sure if I was supposed to get a young professional or an urban hipster vibe off of Sarah and James. The lighting design by Andrew Bonniwell is solid, giving the one-room set texture and contrast, and incorporates large projections of wartime images on the set's back wall.

While the stumbles are distracting, they don't derail "Time Stands Still" in its successful mission to bring the Iraq war home in a powerful way. S

"Time Stands Still" runs at the Firehouse Theatre Project, 1609 W. Broad St., through May 11. Call 355-2001 or go to firehousetheatre.org for tickets and information.