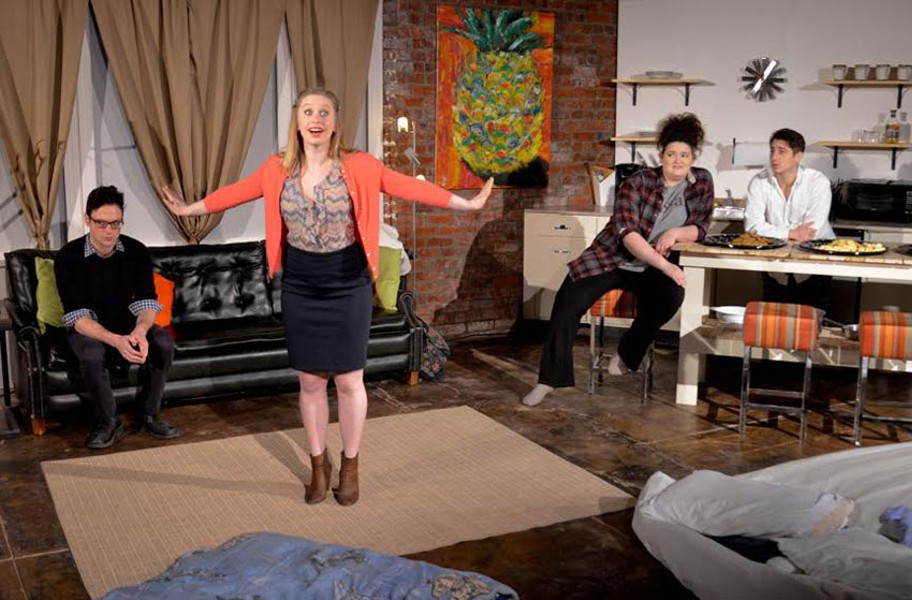 There was a moment early in TheatreLab’s “Bad Jews” when I realized what I was watching: an exaggerated version of two of my friends arguing about Judaism.

One of my friends is serious about observing the religion, culture and traditions of her family. The other identifies as an atheist and gets prickly at accusations that he’s a bad Jew. It’s into this fray about being Jewish that Joshua Harmon’s brutally funny script takes you, one stinging barb at a time.

In “Bad Jews,” it’s not friends who are at each other’s throats but cousins, reunited by the recent death of their grandfather. Leading the cast of four is Kelsey Cordrey as Daphna, who takes her Jewishness very seriously and dreams of moving to Israel. Cordrey is as funny as her character is forceful, milking expressions and small asides for every laugh possible.

Matching Daphna with near equal determination is Liam (Evan Nasteff), an atheist who can’t stand the repeated taunts and lectures. Between the two -- or, more accurately, trying to stay away from the two -- is Liam’s cowering brother, Jonah (Ethan Malamud). The MacGuffin here is a religious relic, their grandfather’s necklace that made it through the Holocaust hidden underneath his tongue.

Considering herself the most faithful of the three, Daphna wants the necklace for her own. Liam wants it to propose to his gentile girlfriend, Melody (Catherine Carol Walker), in the same fashion that his grandfather did. With verve and wit, Liam and Daphna go after each other in the way that only family can. They know each other’s secrets. They know the nicknames the other detests. And watching two people verbally pummel each other hasn’t been this much fun since George and Martha in “Who’s Afraid of Virginia Woolf?”

Nasteff is just as funny and compelling as Cordrey, prowling the stage as his character rants about Daphna. Walker’s wide-eyed disbelief at what’s happening is also humorous, but Malamud could play up his character’s reluctance to fight instead of simply sulking.

Directed with an assured hand by Debra Clinton, “Bad Jews” hits all the right comedic beats and manages a surprisingly touching close. As in August Wilson’s “The Piano Lesson,” we’re asked about the meaning of heirlooms and symbols we can’t fully embrace or discard.