Theater Review: "The Taming of the Shrew"

Henley Street's re-imagining of a Shakespeare classic gets tripped up by its own ambition. 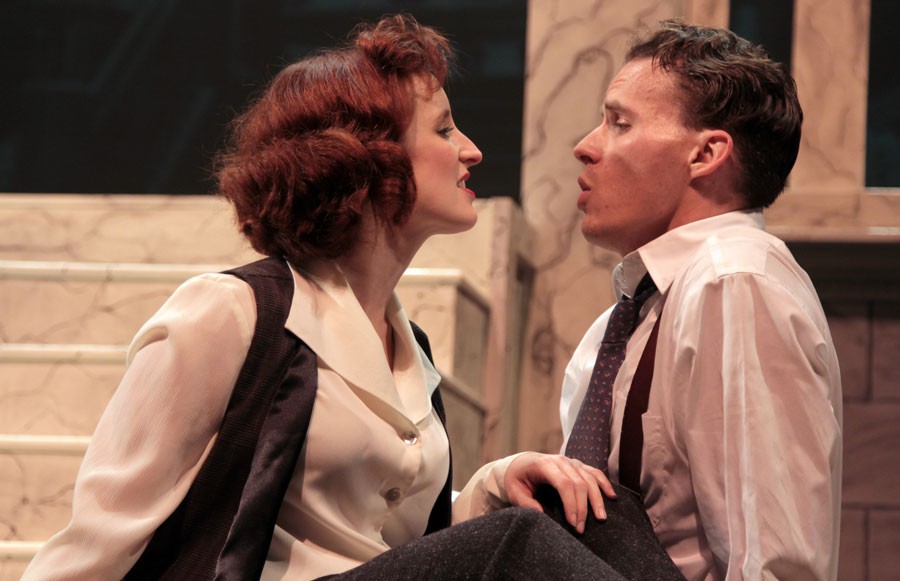 Play director Jan Powell starts with the rich language and complex plotting of the original, and then surrounds it with a flurry of off-camera dynamics as a busy cadre of actors flow in and out of character, their relationships outside the "Shrew" narrative, sometimes wildly different than the ones within the main plotline.

This show-within-a-show staging is a bold choice and it results in an engrossing multidimensional experience. But while intriguing and sometimes thrilling, it's also the production's ultimate downfall. The unconventional way Petruchio (Matt Hackman) woos, wins and ultimately "tames" the hot-tempered Kate (Liz Blake White) already rings all sorts of false notes for the modern listener, coming across like courtship through attrition rather than a development of deeper understanding. In Powell's version, the stormy marriage between the two film actors who are playing Kate and Petruchio further complicates the situation. But this subtext never gets fully fleshed out, so instead of just an archaic moral, we also get a frustrating mystery.

Still, there's plenty of giddy fun to be had before then, as the film's director (Wendy Carter) occasionally must stop the action when an actor flubs a line or a key piece of scenery is missing. The production adds yet another dimension when, in between scenes, the actors step off stage right and sing old standards such as "I'm in the Mood for Love" or "I Get a Kick Out of You."

Powell makes reference to famous personalities from the 1930s, having Kevin Grantz play Gremio, one of the suitors vying for the hand of Kate's little sister, Bianca (McLean Jesse), as if he were W.C. Fields. Grantz as W.C. Fields is charming but the Marx Brothers as played by three women (Carter again, Alessandra Hernandez and Danielle Thompson) never quite delivers on the premise. The off-camera action introduces distractions as often as it adds intrigue, so that sometimes the whole enterprise just seems messy, a problem that may get better after the preview performance I saw.

Hackman and White make an attractive pair and share a promising chemistry that begs for a more straightforward telling of the "Taming." Other standouts are John Mincks as Lucentio, the cleverest of Bianca's suitors, and Mark Persinger as the stubborn Baptista who won't let the his sweet daughter Bianca marry until sour Kate is betrothed. Stacie Rearden Hall has some nice moments as Petruchio's servant, Grumio, but really shines singing a smoky rendition of "Stormy Weather."

Powell and set designer Joshua Bennett make good use of the expansive Steward School stage, a large, raised platform and stairway dominating the space. Costume designer Virginia McConnell is the real technical star, though, evoking the lavish Hollywood frocks of the '30s that are being featured at the Virginia Museum of Fine Arts. Powell shows impressive ambition with this "Shrew" but, while the production is consistently fascinating, it's ultimately unfulfilling. S

"The Taming of the Shrew" plays at the Steward School, 11600 Gayton Road, through Nov. 16. Go to henleystreettheatre.org or call 340-0115 for tickets and information.