Theater Review: The Songs Aren't Great, but "Heathers: the Musical" Will Still Appeal to Fans of the Film 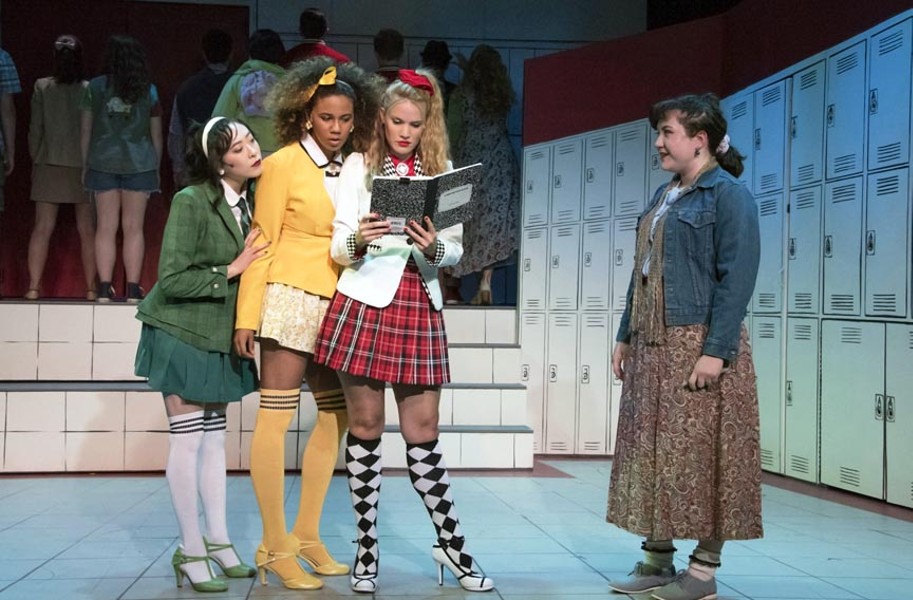 Tom Topinka Kathy Oh as Heather Duke, Michaela Nicole as Heather McNamara, and Christie Jackson as Heather Chandler do great work as the three cruel Heathers, and Carmen Wiley is the outstanding lead as the conscientious Veronica Sawyer in a musical comedy from Firehouse Theater and TheatreLab.

As with so many films turned musicals, “Heathers: the Musical,” is the kind of play that expects its audience to show up with some prior knowledge of plot and character.

While fans of the 1989 movie starring Winona Ryder are perhaps the intended audience, it’s still a musical, and its world feels slightly sanitized in a parallel-universe sort of Westerberg High School where the characters aren’t quite as terrible as they were in the film. It’s a slightly less cynical version of the story you already know.

A production of TheatreLab and Firehouse Theatre, “Heathers: the Musical” plays up the campiness and the dark humor of the film with an awareness of its cult status. Director Debra Clinton treats the musical as a work of fan fiction: The suspense is less about what might happen, but when. The result is a lot of fun, and authors Laurence O’Keefe and Kevin Murphy have created a surprisingly redemptive and hopeful story.

This production boasts a hardworking and talented ensemble, as well as a multitude of noteworthy performances. New to the Richmond stage, Carmen Wiley is a standout in the lead. Her version of Veronica Sawyer is sympathetic but has with just enough of an edge, and her comedic timing is great. All three of the Heathers are perfectly cast, with Christie Jackson as the ruthlessly cruel and beautiful Heather Chandler, Kathy Oh as her obedient head lackey, Heather Duke, and Michaela Nicole as sweet and sensitive Heather McNamara. Adam Valentine’s brooding J.D., Sawyer’s love interest, is creepily cute and endearing. And Leanna Hicks steals a scene or two with her adorable nerdy fan girl take on the Martha Dumptruck character.

Jason Marks’ musical direction is excellent — the myriad vocal performances in this production are impressive. Unfortunately, the songs in this musical just aren’t that great. Still, there are some fun numbers such as “My Dead Gay Son,” performed by Billy Christopher Maupin and Eddie Webster as two fathers in mourning, and Casey Payne as hippie teacher Mrs. Fleming in “Shine a Light.”

The costumes are a crucial element of this production, and designer Ruth Hedberg doesn’t disappoint. From the Heathers’ color-coordinated prep school uniforms to the ensemble members, each character is outfitted to represent a recognizable high school clique or subculture — goth, hippie, geek or jock. Hedberg’s costumes are perfect, and they provide a lot of visual interest onstage.

Ben Burke’s set design opts for a hand-drawn look that works well with the production’s campy appeal, and Michael Jarrett’s lighting design keeps the emphasis on the characters, as well as Aza Raine’s fun and playful choreography.

Honestly, “Heathers: The Musical” isn’t a great musical. But it’s a fun show for fans of the movie, and the Firehouse and TheatreLab production makes the most of a musical that relies on constant references to its predecessor. S