Theater Review: "The Importance of Being Earnest"

A collaboration of Richmond theaters lightly romp through the Victorian era. 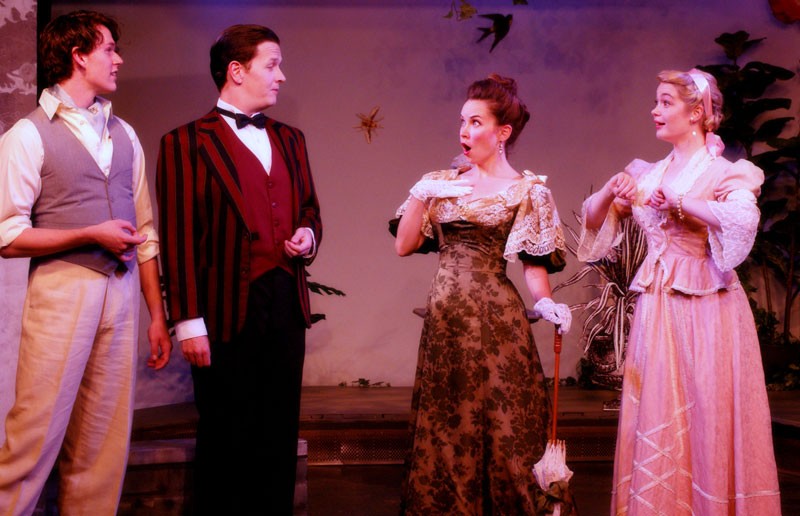 Some of the greatest achievements of Oscar Wilde's life are what led to his downfall.

This certainly was the case with "The Importance of Being Earnest," Wilde's farce on the social conventions of his day. After finding out about his son's homosexual affair with Wilde, the Marquess of Queensberry planned to throw a bouquet of rotten vegetables at Wilde during the play's opening night. Wilde caught wind of the plan, and barred Queensberry's entry to the show. The feud ended up in court, and Wilde subsequently was convicted of gross indecency and imprisoned for two years.

On a sunnier note, "The Importance of Being Earnest" -- as staged by Richmond Triangle Players and the recently merged Richmond Shakespeare and Henley Street Theatre -- is a light romp lampooning the Victorian era.

When good friends Algernon (Ian Stearns) and Jack (Thomas Cunningham) discover that they've each created fictional people to escape the social restraints of the day, it sets off a chain reaction of mistaken identities, sparkling wit and an attack on Victorian customs.

It's easy to imagine Stearns as a stand-in for Wilde, portraying Algernon as a vain dandy while he lies about making wisecracks. Cunningham is all stuffy and indignant as Jack, the man who quarrels over who has the right to eat his muffins. The men play well off each other, and mildly hint at some of the text's homosexual undertones.

But the show's best interactions are between Gwendolen (Audra Honaker) and Cecily (Aly Wepplo) in the second act. Portraying characters who believe they're engaged to the same person, the actresses generate quite a few laughs while they spar verbally. As Lady Bracknell, Robert Throckmorton does a great job delivering some of the best lines Wilde ever wrote. The character represents Victorian-era values, and provides much of the tension in "Earnest."

In a play that relies so heavily on mistaken identities, the cross-dressing makes sense, and the character often is played this way. But it's disappointing to see a character like Lady Bracknell taken away from a female performer. Not to detract from Throckmorton's performance, but given the dearth of good roles for women middle-aged and older, it seems a slight to cast a man in the role.

Jan Powell's direction gives her actors the tools they need for the job, with supporting players such as Stephen W. Ryan milking every laugh possible out of their roles.

While Tennessee Dixon's sets for Algernon's flat and the Manor House drawing room are passable, the garden scene in the second act is underwhelming and amateurish. Emily Atkins' beautiful costumes fit the period, with Honaker's two dresses being particular striking.

Views of homosexuality have changed quite a bit in the past century, but Wilde's masterpiece has only grown in esteem. If you're in the mood for some witty and frivolous banter, head to Richmond Triangle Players before this ends to see why it's important not to be earnest.

"The Importance of Being Earnest" plays through Oct. 26 at Richmond Triangle Players, 1300 Altamont Ave. For information, call 346-8113 or visit rtriangle.org.