Theater Review: "The Comedy of Errors" 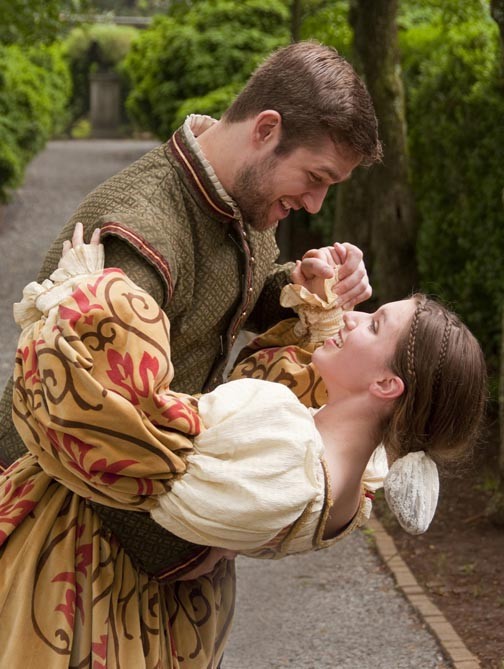 When you think Shakespeare, you might not typically think slapstick. That will change forever after you take in Richmond Shakespeare's production of "The Comedy of Errors." The madcap fun starts early and comes fast and furious.

In this earliest of the Bard's known works, under Steve Perigard's inspired direction, the madness is replete with rude gestures, comic melodrama and frenetic stage action. You'll notice the occasional rhymed couplet, but in this rollicking comedy Shakespeare's poetry is more likely to be employed comparing a fat woman to a globe than in eloquent soliloquies about love or life.

Of course, bigger themes lurk in the cracks between the wisecracks, and Perigard alludes to issues of identity in his director's notes. But for the casual observer, the play presents a classic mistaken identity farce. Antipholus of Syracuse (Jonathan Conyers) arrives in a new town where his identical twin, Antipholus of Ephesus (Matt Lipscomb), has been living for decades since the two were separated in infancy. To multiply the possibilities for misadventure, he's attended by a servant, Dromio (James Murphy), who has a twin brother (John Mincks) in the service of the Ephesian Antipholus. Confusion abounds, eventually encompassing acts of love and commerce, landing one man in jail before a protective Abbess (Jody Strickler) helps unravel the situation.

One thing the Ephesian Antipholus has that his brother lacks is a wife, Adriana, and that's a particularly good thing for this production, because Molly Hood plays the perplexed spouse with hilarious abandon. Hood's character has a sister, the lovely Luciana (Alexandra Wiles), who captures the heart of the out-of-town Antipholus, allowing Conyers and Wiles to display some charming romantic chemistry. Mincks and Murphy are masters of physical comedy, necessary skills because both Dromios are regularly beaten, chased and otherwise manhandled. David Janosik wrings a good many laughs from a quick scene as a doctor convinced that Antipholus has been possessed. Irene Kuykendall lends her exotic beauty to her brief appearance as a courtesan adding more convolutions to the plot.

But the real star here is Perigard as he extends the action beyond the mostly bare Agecroft stage into the crowd, further involving patrons in the play. He's assisted by costumer Liz Hopper, whose matching Elizabethan frocks are an essential aspect of the identical twin artifice. Another key player is text coach Jeffrey Cole; while Perigard elucidates much through action, much care clearly was given to crisp, clear diction.

"The Comedy of Errors" plays through July 7 at Agecroft Hall, 4305 Sulgrave Road. Tickets and information at richmondshakespeare.org or by calling 866-BARDTIX.