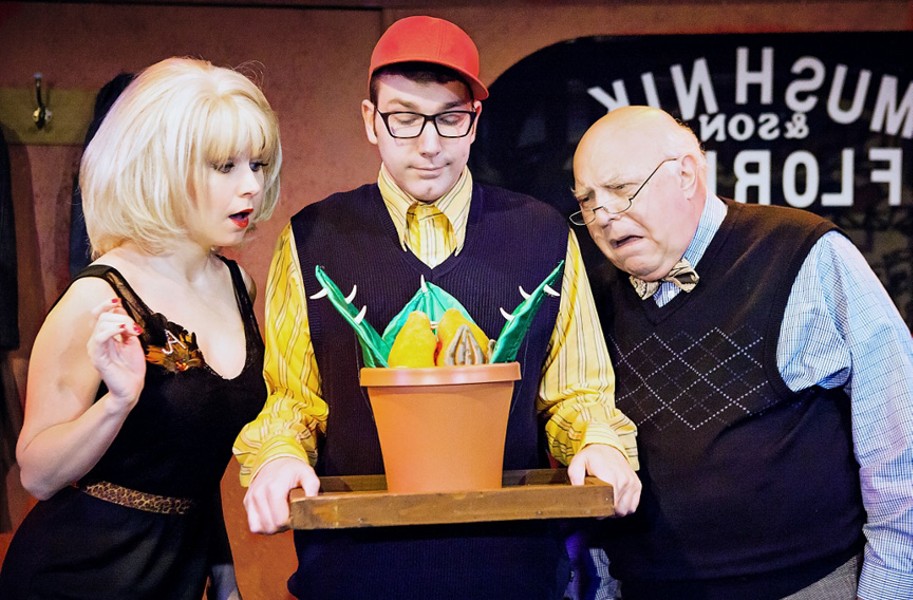 Robyn O'Neill Audra Honaker as Audrey, Ian Page as the nebbish Seymour and John Hagadorn as Mr. Mushnik in the classic musical comedy about a man-eating plant.

Since “Little Shop of Horrors” debuted off-off-Broadway in 1982, its blend of camp, sci-fi weirdness and ’50s rock and doo-wop score has been a perennial hit with audiences.

When Swift Creek Mill Theatre first staged the show in 1986, it ran for eight months, becoming the longest-running show in its history. Once again, an evil little plant has put down roots at Swift Creek under the capable direction of Tom Width, and the results are a lot of fun.

At the center of this comic musical is Seymour (Ian Page), a nebbish who works at Mr. Mushnik’s (John Hagadorn) flower shop on Skid Row. While Seymour pines for his ditzy co-worker, Audrey (Audra Honaker), Mr. Mushnik contemplates closing his shop due to lack of business. The fortunes of all three are changed after Seymour purchases a strange plant in Chinatown during a total eclipse of the sun.

The only problem is the plant desires human blood and eventually flesh.

With sterling voices across his cast, Width walks a tightrope between camp and sincerity in his direction, especially with songs such as “Skid Row (Downtown).” Technically, Width’s set looks appropriately run-down, and his creation of puppets to represent the plant — including one that’s 7 feet tall — is quite impressive.

As the nerdy Seymour, Page lacked verve early on the night I attended, but inhabited the role more fully as the show went on. As Audrey, Seymour’s love interest — and favorite punching bag of her bad-boy dentist boyfriend, Orin Scrivello (Adam Mincks) — it would be easy to simply mimic Ellen Greene’s stage and screen version of the character, but Honaker manages to give Audrey her characteristic voice while making it her own. Her rendition of “Somewhere That’s Green” is both heartfelt and funny in its suburban aspirations, and Honaker amps up Audrey’s kookiness in the second act.

Playing the street urchins, a trio of singers named for ’60s girl groups (Crystal, Chiffon and Ronnette), Katrinah Carol Lewis, Jessi Johnson and Ashlee Arden Heyward belt with majestic tones while they act as the show’s Greek chorus. With such songs as the musical’s title number, “Dentist!” and “Skid Row (Downtown),” the singers provide a jolt of energy for every scene in which they appear.

As the dentist who has “a talent for causing things pain,” Mincks is a tad underwhelming in his opening number, but makes up for it with the many minor characters he inhabits throughout the rest of the show. And as Mr. Mushnik, the shop owner, Hagadorn is humorously dour as he sings sweetly.

Perhaps it’s the curse of living in the age of computer-generated imagery, but while the plant puppets are impressively constructed, it’s distracting that the mouth movements don’t entirely match Durron Tyre’s golden-throated voice. And without giving too much away, the fog and costuming choices in the show’s finale dilute some of the ending’s punch.

Still, “Little Shop” is wickedly amusing spectacle, and Alan Menken’s tunes will send you out of the theater humming. Swift Creek has cultivated a hit — but remember, don’t feed the plants. S