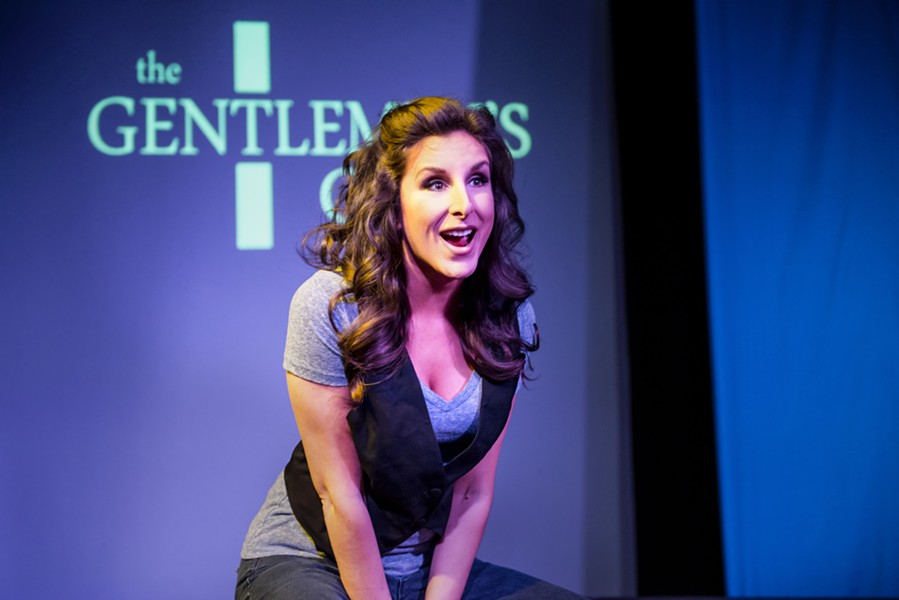 Anton Chekhov famously said, “One must never place a loaded rifle on the stage if it isn’t going to go off.” The most prominent feature on the set of Richmond Triangle Players’ “Hypocrites and Strippers” is a shiny stripper pole. So wherever this frequently funny, consistently challenging, ultimately uneven one-woman show roams, you know where it’s going to end up.

Which isn’t a bad thing. With her brazen, acrobatic turns on the pole late in the show, actress Eva DeVirgilis proves conclusively why she’s one of only a handful of actresses who could pull off a show like this. Besides being beautiful and athletic, she has the chops of a veteran stand-up comedian. The most entertaining aspects of this production involve DeVirgilis eliciting and riffing on responses from the audience. Prowling the stage and roaming through the audience on opening night, she chides one patron for her leopard-skin pants, tries to match the pitch of one man’s voice, and seamlessly incorporates the unscripted sounds of fireworks from the nearby Diamond into the 90-minute, intermission-free show.

These improvisational bursts only improve a disjointed script by Kim Yaged. The plot ostensibly follows the story of Jyl, a lesbian who ends up having back-to-back relationships with strippers, a source of both fascination and torment for her. But Yaged doesn’t keep her story within the confines of a conventional plotline and makes ample room for diversions both intriguing -- the fascinating details of the stripper lifestyle -- and disturbing -- a revealing fantasy in which Jyl acts out her more aggressive thoughts toward her girlfriends.

Yaged’s script has flashes of surprising insight, such as when Jyl asserts, “Lesbians are innately incapable of being feminists by virtue of their desire to possess women.” But it also loses the through line of Jyl’s relationships amidst the diversions and eventually ends with an arty pretension that’s only half as satisfying as the meaty mayhem before it.

To provide the appropriate strip-club milieu, set designer T. Ross Aitken has constructed a mostly black set with red and blue stripes, drawing the viewer’s focus to a small, raised platform featuring the pole. In some scenes DeVirgilis rocks some impressive thigh-high boots, the most remarkable element of Alex Valentin’s costume design. The flashy lighting design by Andrew Bonniwell adds some gaudiness but also is spotty and too often leaves the show’s star in shadow.

DeVirgilis gets comic assistance from back-of-the-stage projections, images of “Leave It to Beaver” appearing while Jyl describes coming out to her family as a stripper lover, for instance. But for the most part, DeVirgilis carries this show solo, needing only the support of a lacy black bra to make it a must-see performance.

“Hypocrites and Strippers” plays through May 17 at Richmond Triangle Players Theatre, 1300 Altamont Ave. For tickets and information call 346-8113 or visit rtriangle.org.